A quilt study day was held at Swaffam Prior by Region 9 (Norfolk and Cambridgeshire) on March 17. I drove across from Ipswich; this took me longer than expected so I arrived when the day was already in progress. The study day was once again led by Pauline Adams and Carolyn Ferguson, and was a bit more informal than previous study days. First, quilts brought by Pauline and Carolyn were shown, to describe some basics. Then quilts brought by those attending were evaluated by the group. 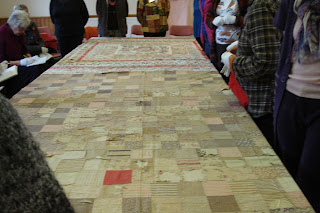 The nearer quilt was in poor condition but shows a good range of "half mourning" fabrics. Victorian mourning dress was tightly regulated. Full mourning for women lasted one year when black was worn, then second mourning, another year of black clothing when some ornamentation was allowed. Then a half mourning lasted 6 to 9 months and the dress eased back into colour - drab purples were common. The dyes used often cause the fabrics to disintegrate, as here. This quilt dates from 1860 - 1880 and has no wadding. There are good examples of monochrome copper plate printing. There is some symmetry in the placement of fabrics and English paper piecing was used to set the patches together. Its not sure if the red patches are "poverty patches", a repair or deliberate placement. This quilt will not be repaired, but obviously new fabric could be used to hold parts together if necessary. The fabrics are very fragile. 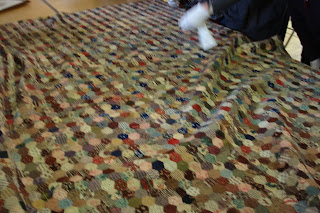 A hexagon quilt where the patches have been set in rows. This quilt had some interesting fabrics in it. 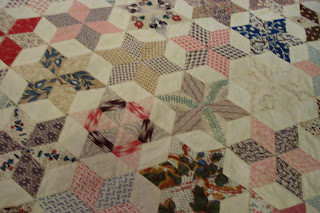 A quilt that has been expertly pieced by English paper piecing. The fabrics have been fussy cut. There were merchants who sold scraps by the pound specifically for patchwork - and samples were also used in patchwork. Different colourways of the same pattern can be an indication of this fabric swatch use. 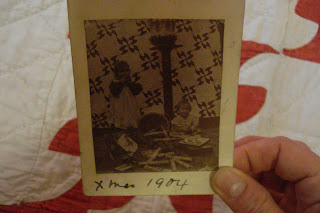 An interesting family quilt with a family photo that shows the quilt in the background. This is the Wilkinson family quilt, made in 1896 and the photo taken at Christmas 1904. The design is the Drunkards Path, made in turkey red and white cotton. The maker is known. 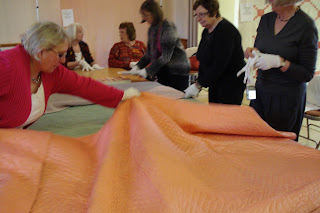 Here are three quilts from the Sunderland area - my quilt made by a WI group is the salmon coloured quilt in front. The other two (green and white quilts) belong to Liz N. All three quilts have similar motifs and a diamond central device. 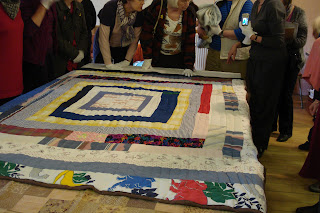 And finally, a real Gee's Bend quilt. One of the ladies became very taken with the Gee's Bend quilts and read all that she could about them. Upon discovering that there was a (selling) exhibition being held in Australia, she bought this quilt - much to her family's amazement at the price. It is roughly built up from the centre, in a  frame arrangement. These quilts are made under cramped conditions. The quilt looks as if it has been made with remnants, the fabrics are of all different types and the quilt is not especially well made. Of course this sparked a debate on "art" versus "craft".

About 30 ladies attended this day which was most enjoyable. Many thanks Region 9 for organising this day. Two antique quilts were raffled for funds - one possibly made in Norfolk.
Posted by Pippa Moss - Welsh Quilts at 10:00