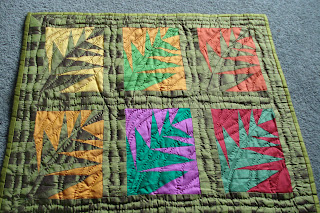 When I was first quilting, I went with a group of friends to Siripan Kidd's house in Colchester for a day workshop. Siripan sold beautiful Thai silk, and this piece that I made shows some of her techniques - hand drafted patterns, put together with hand piecing. You can see that some of the silk is "shot silk" and another of her techniques was to place the grain of the shot silk in varying directions so that the colour changed. You can see this clearly in the border and also some of the leaves. 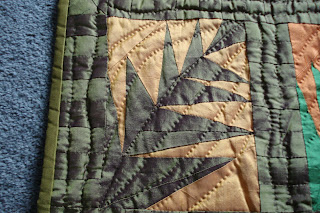 Detail - the small quilt was hand quilted in a random pattern. That was fun to do. Siripan and her husband now live in Thailand and until recently, arranged textile themed holidays for quilters.


Recently, I was having a rummage amongst my stored patterns and found these small items. They were purchased many years ago from Siripan. 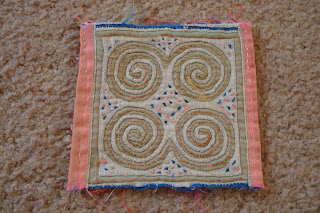 These are small sections of antique Hmong embroidery. I believe that they are parts of a "carrying strap". In any case, they are functional pieces which have been well used. 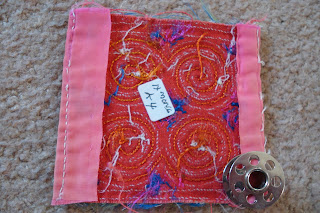 The stitching is very fine and it is interesting to see the reverse. The bobbin case has been placed to show the scale. 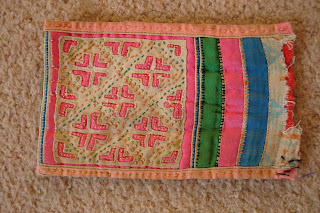 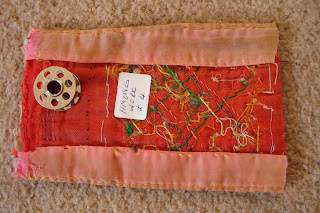 The labels show that I bought them for £4.oo each. The stitching is much finer on these older pieces than the more modern made for tourist pieces. 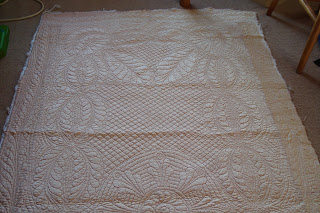 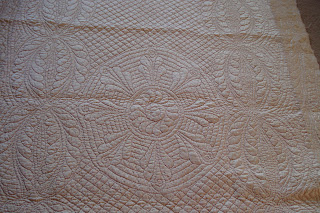 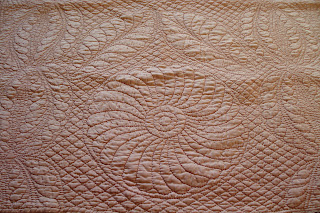 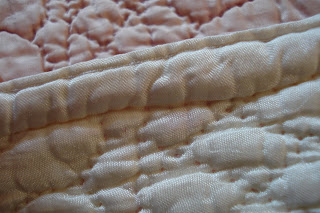 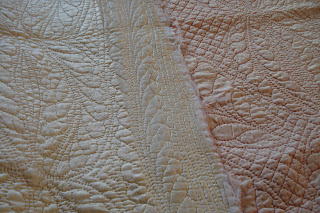 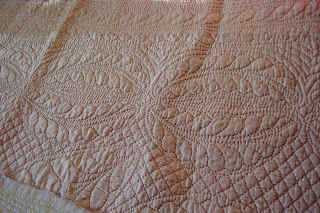 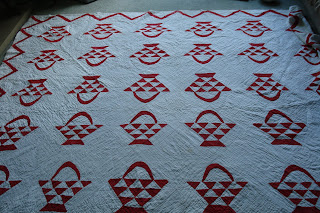 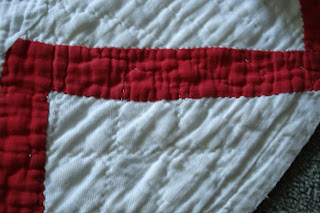 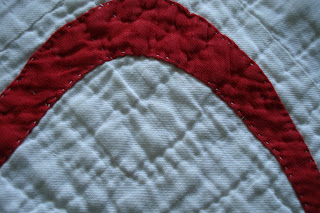 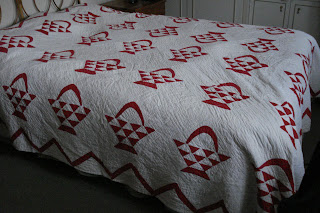 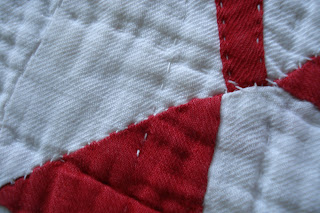 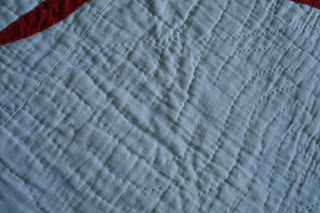 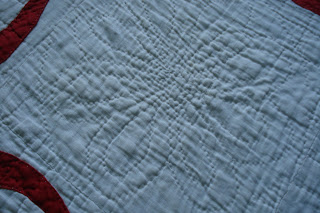 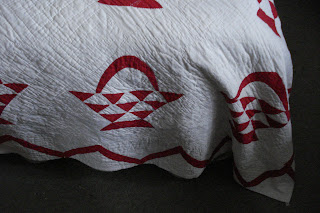 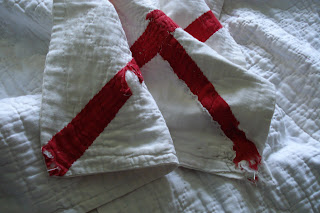 If Mary Maud was born in 1893 then the quilt possibly dates from about 1910 - 1915. It is very difficult to date quilts made from plain fabrics and the turkey red fabrics were popular and manufactured over a long period.
Posted by Pippa Moss - Welsh Quilts at 10:08 4 comments:

Pettistree - 25th Anniversary of the Rehanging of the Bells 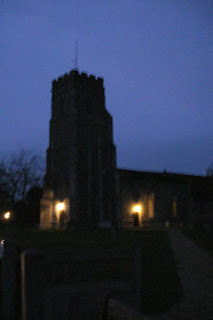 Pettistree is a small village with a beautiful mediaeval country church - yesterday we had a special celebration during Evensong to celebrate the 25th anniversary of the rehanging of the bells. The bells had been unringable for many years and had only briefly been rung for VE Day.

With the help of local people and the Suffolk Guild of Bellringers, the money was raised in 1986 and the bells were rehung by Taylor's of Loughborough. A new band of learners was taught in the months before the work was completed - so the bells were rung by the local (and inexperienced) band at the rededication of the bells. Not many of the original band remain (only Chris and Mary) but the band has flourished and is one of the most successful in the area. Bellringing is finding it difficult to recruit new ringers and Pettistree is just the same, but for the moment, our band is doing well. 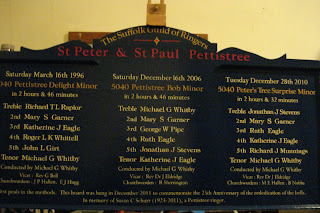 During the church service - taken by Bishop Clive - the new peal board was blessed. This shows three special peals rung over the years, where three new methods were rung and named. They are: Pettistree Delight Minor, Pettistree Bob Minor and Peter's Tree Surprise Minor.

A quarter peal of Pettistree Bob was rung prior to the service and there was also open ringing. Next week another peal will be rung, to include the three "Pettistree" methods, as well as the newly named Wickham Market Surprise and Schurr Surprise methods (Susan Schurr was a ringer who was very much loved and who passed away during the year). 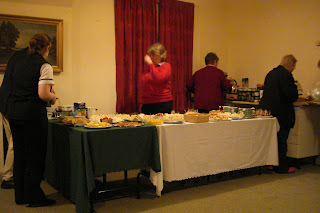 In the newly refurbished church room, the ringers had prepared a "ringers' tea" with sandwiches, quiche, cakes and much other food. Of course, although over 50 people attended the reception, there was far too much food and much was taken away to be eaten later. 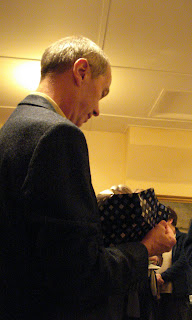 Mike Whitby has been the ringing master for the 25 years and it is largely due to him that the band is such an active one. A presentation was made at which he was presented with a tankard and a framed drawing of the church.

This is my 200th post and I thank everyone for their kind comments - I always enjoy these so do keep them coming. I taught Applique with Embellishments at Quilters Haven on Saturday. We played with Intense pencils and fabric paint - ruched fabric strips and made ribbon petals - did things with freezer paper - it was very enjoyable.

I also talked to Karin Hellaby briefly before the class - I think that I have arranged an informal quilt study day to be held at Quilters Haven on a Sunday - will let you know the date when I have confirmed it - I also arranged to exhibit some of my Durham quilts over the spring half term at Q H - again will let you know the dates. Several years ago now, I showed some Welsh quilts at QH - now I reckon it is the the Durham quilts' turn.