I bought this needlework magazine earlier in the year...it was not cheap! Although undated, the subscription form seems to imply a date of about 1936. This copy was sold in the shop "Qualityart" , a needlework store at 13 Princes Walk, Halifax. The cost then was 1/3 or about 8 pence, and you could subscribe for four issues for the cost of 4s 8d...28 pence. Correspondance courses in embroidery could also be taken, at a cost of 7/6 for each. There were five to choose from, no 1 for beginners, up to no 5 for More Advanced. 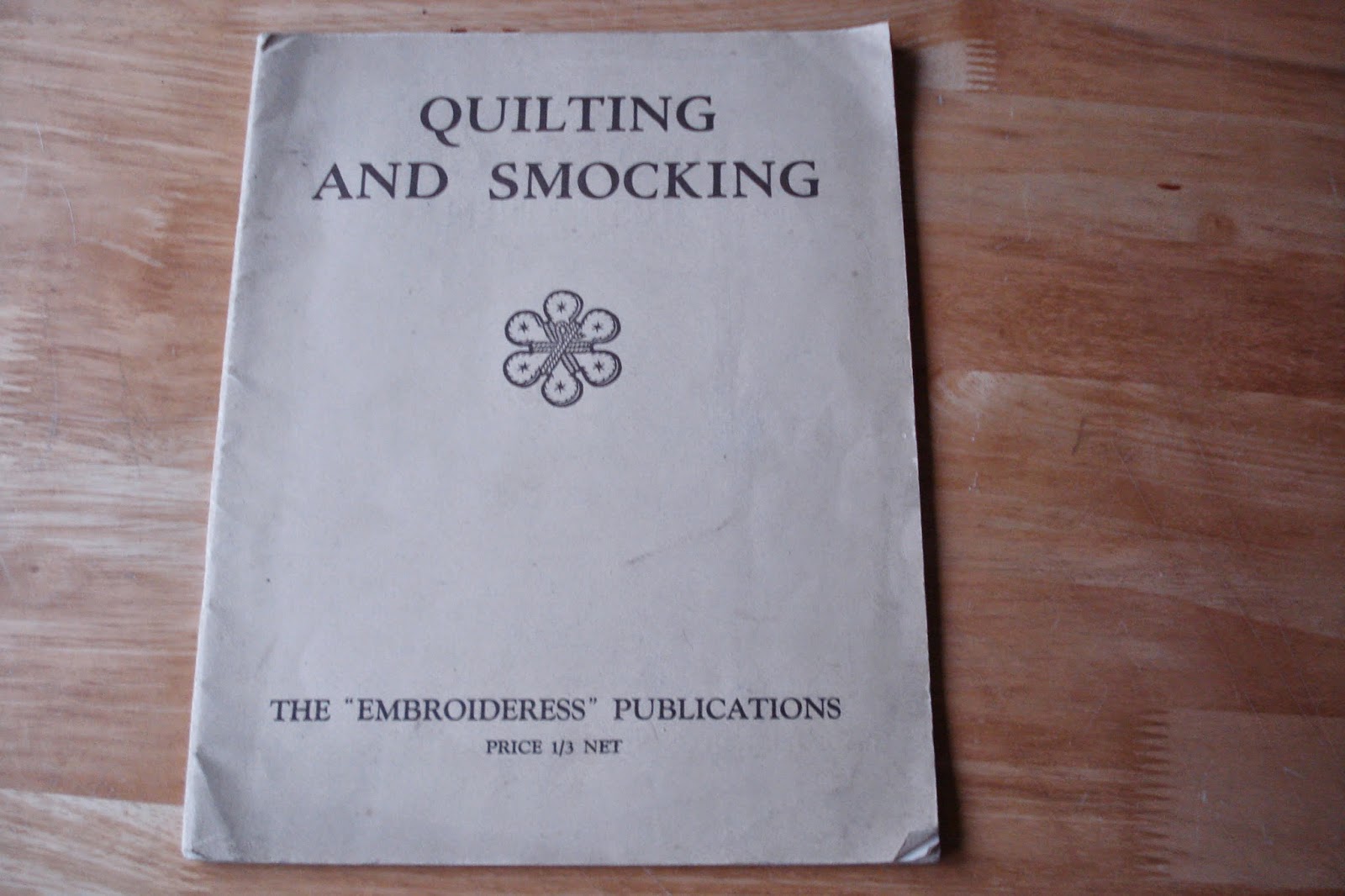 This issue is mainly about quilting and smocking....quilting including British quilting, American quilting and Italian quilting. Patterns could be bought. Childrens smocks were covered, as well as an article on using English smocks as a source of designs. 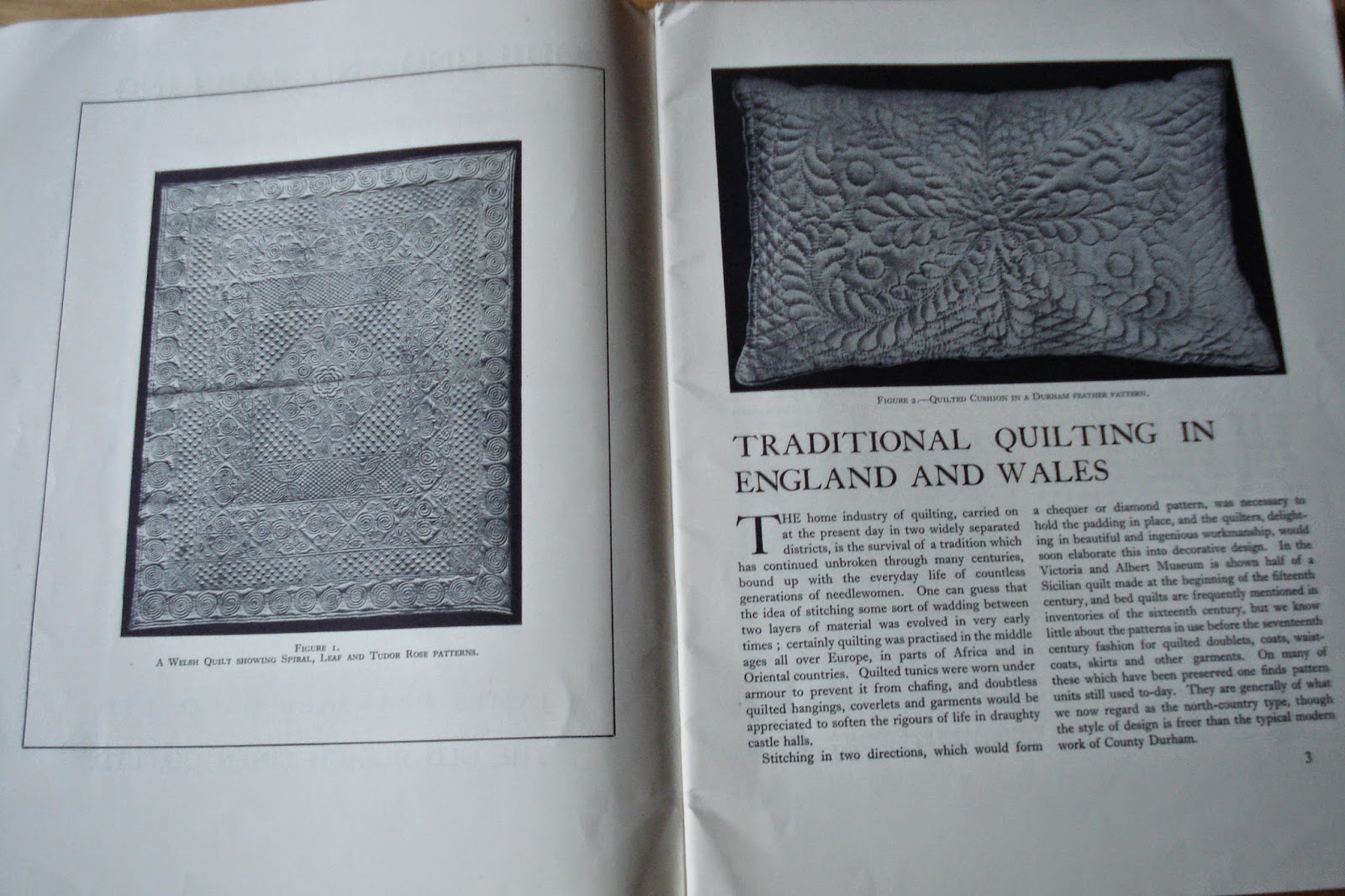 Traditional Quilting in England and Wales is the main article, and serves to publicise the Rural
Industries Bureau, which provided the illustrations. General descriptions and instructions are given, as well as the address of Country Industries and the Little Shop in Sloane Street. Readers are told not to copy the RIB designs, "as they were shared on the understanding that they should not be copied, as they were created by quilters who depend on this work for their livelihood".

The RIB scheme, started in 1928,  ceased to exist in 1939, when war work and a shortage of fabric made the scheme unworkable.

One of the illustrations shown for a commercial pattern  is for a small nightdress case in a Welsh design....to be very finely worked in backstitch. I enlarged the design and then quilted this small cot quilt in polished cotton. The centre coin has a design of leaves, possibly horse chestnut leaves. This was a fun project to do, and gave me a chance to try out the small traditional frame that I had bought at a BQSG meeting several years before. 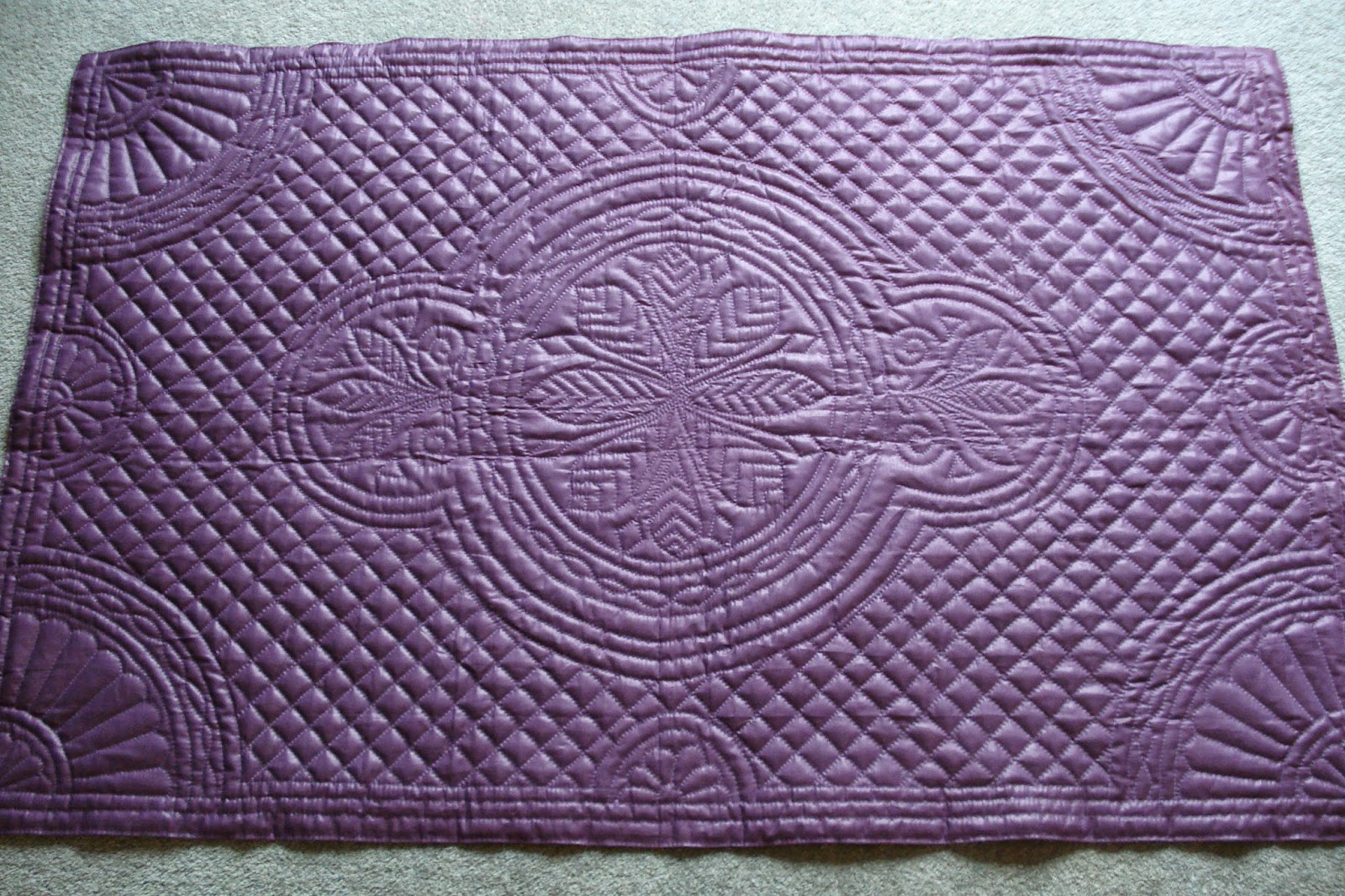 Like many, I enjoy collecting smaller items as well as the bigger quilts. I imagine that scraps of fabric were made into useful items for the house, and as gifts to others. Or, as items to sell at bazaars and for the RIB. People are more likely to consider buying a small, less expensive item than a more major purchase. However, the fact that these items were intended for use does mean that many have not survived. One wonders why some items have survived virtually unused...were they unwanted gifts, "too old fashioned" or perhaps too special to use except for guests! 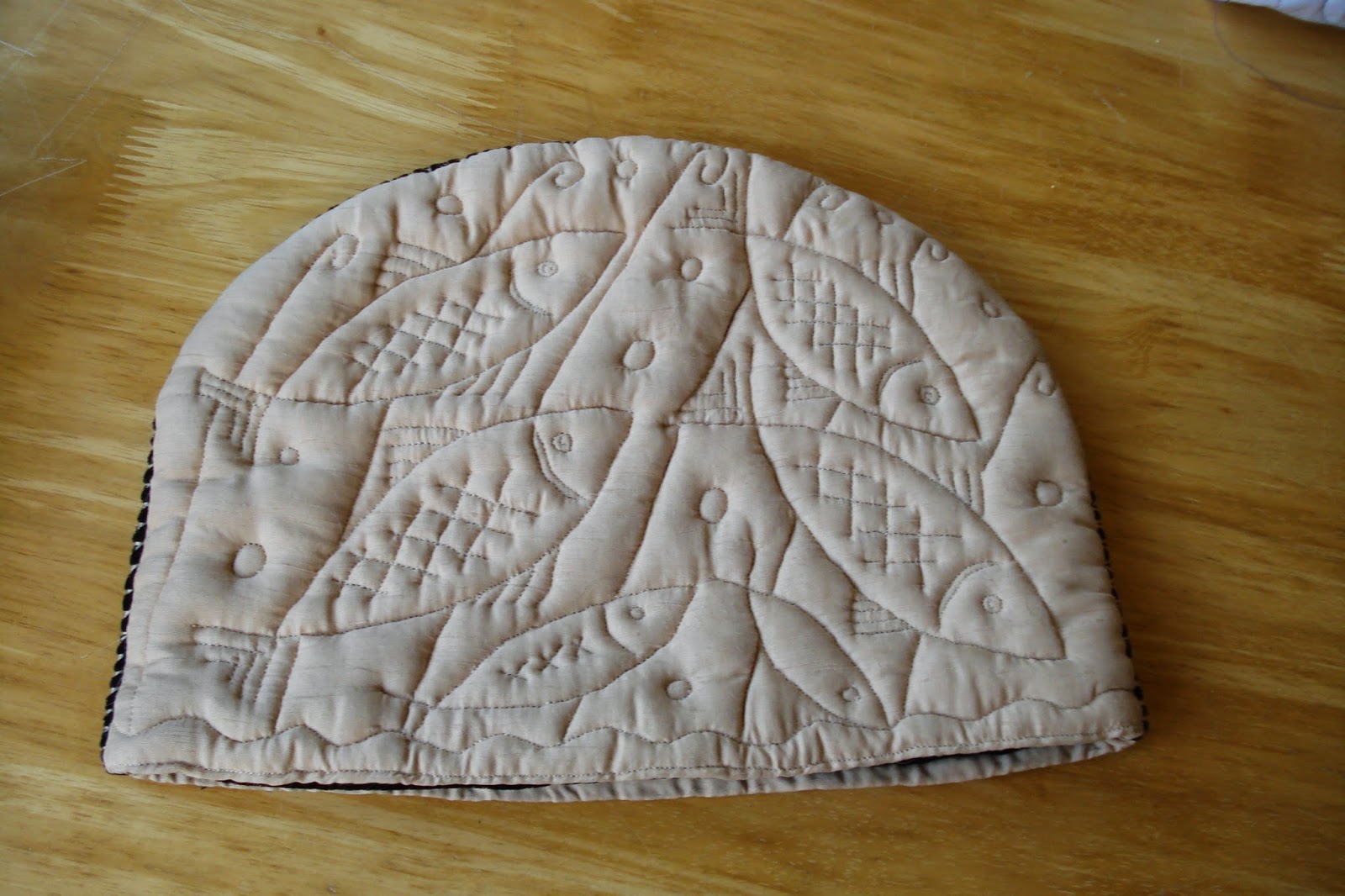 Here is a small tea cosy with an interesting fish pattern. It is machine quilted, but does not look factory made. 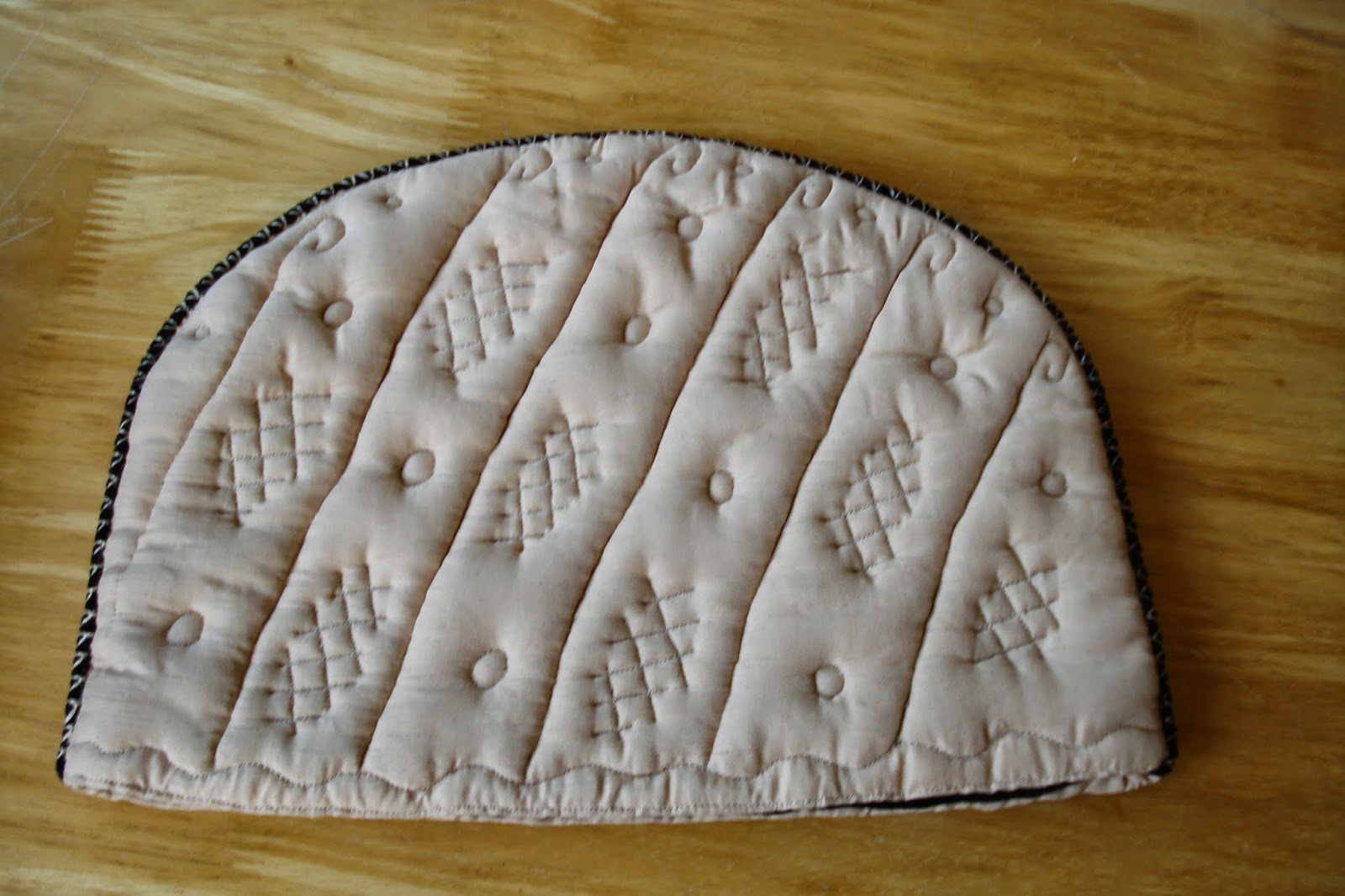 The reverse is a more abstract pattern, almost like naughts and crosses! No provenance for this item, which came from a seller in Blackpool. 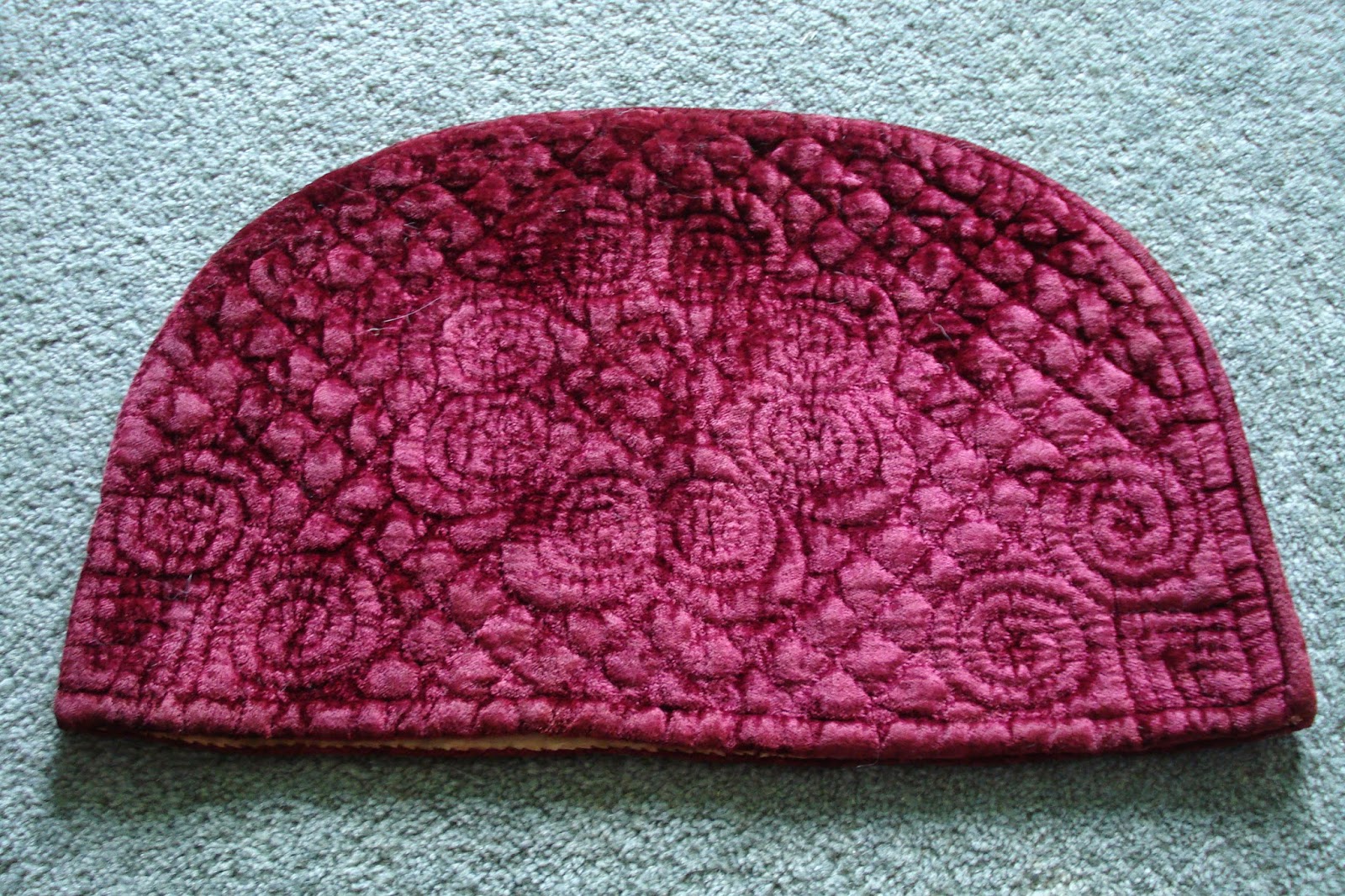 Here is another quilted tea cosy...in red velvet....the quilting is hard to see on the outside.... 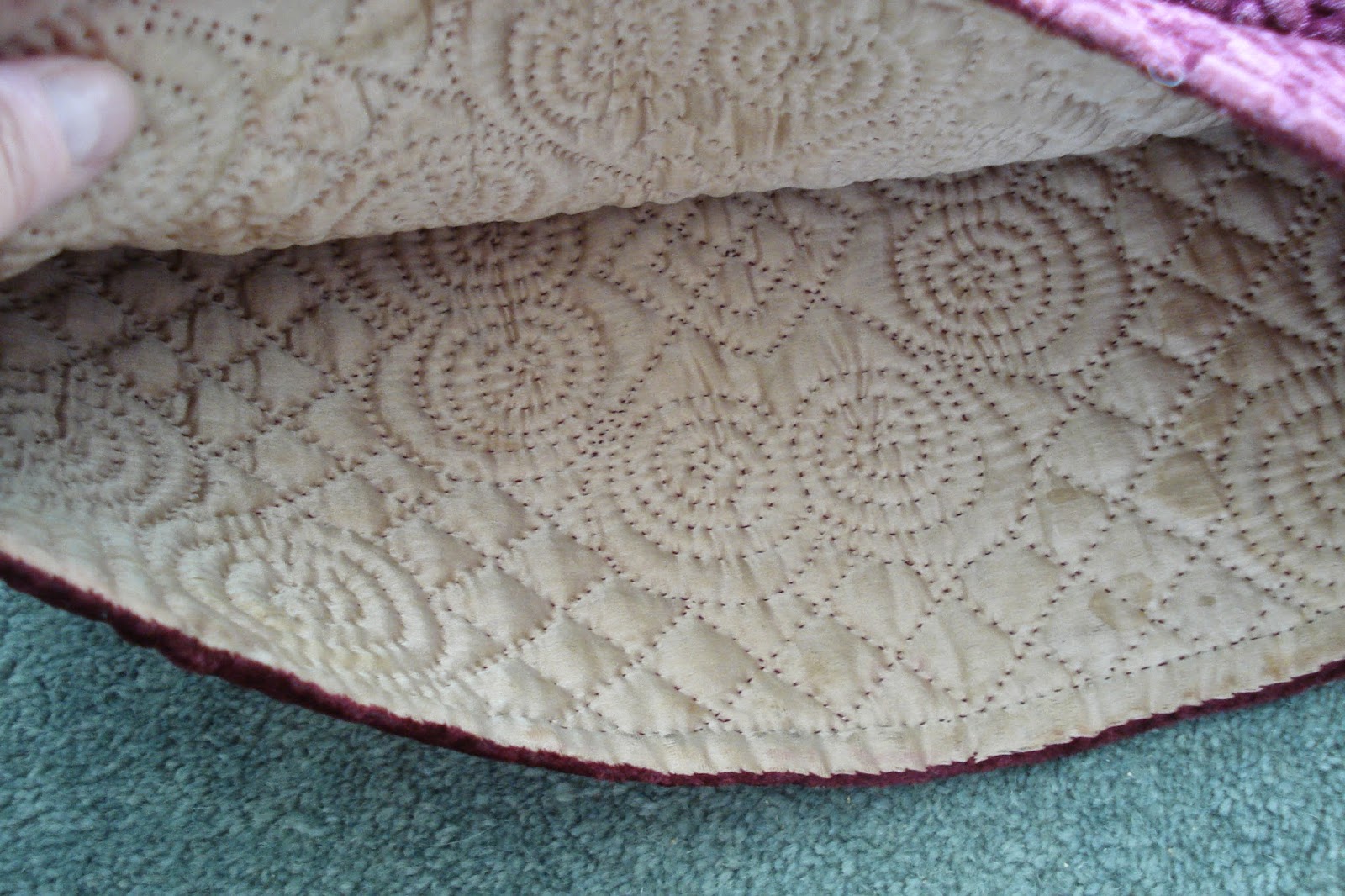 ..but much more apparent inside....very much a welsh patterned tea cosy... 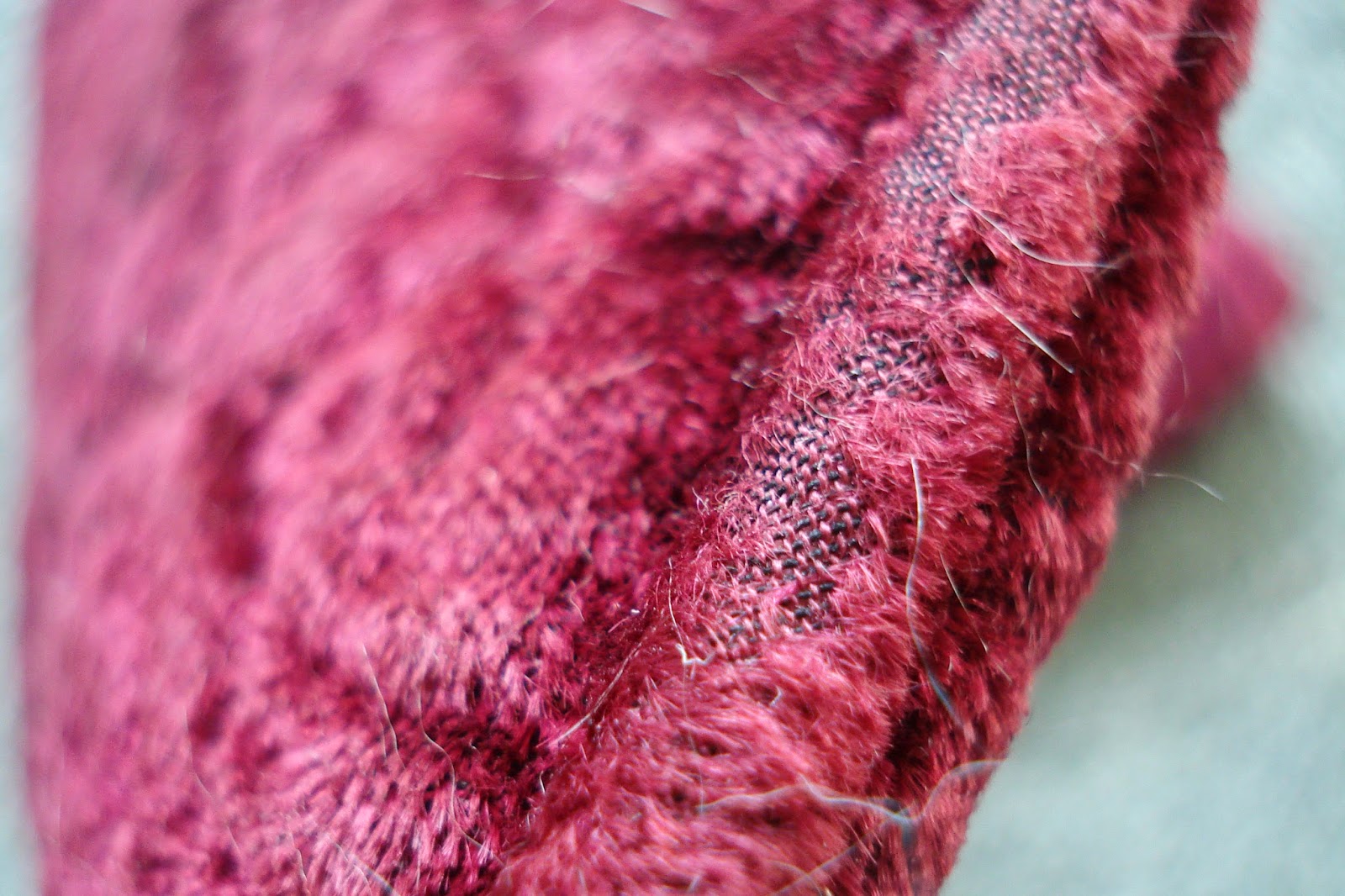 Generally in good condition, except for some wear on the edge. 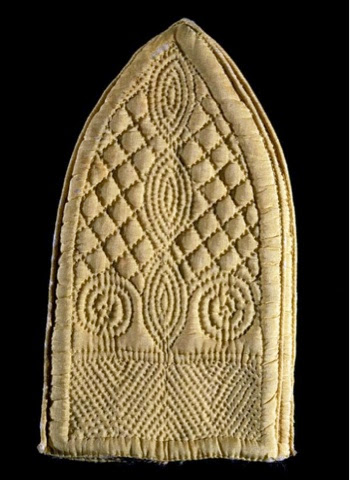 Here is an image from the V & A collection, of a Welsh tea cosy purchased at Muriel Rose's Little Gallery on Sloan Street in London,and made by the RIB quilters in the 1930's. I have looked in my copy of RIB catalog, but cannot see any illustrations of tea cosies, nor are these items included in the price list. 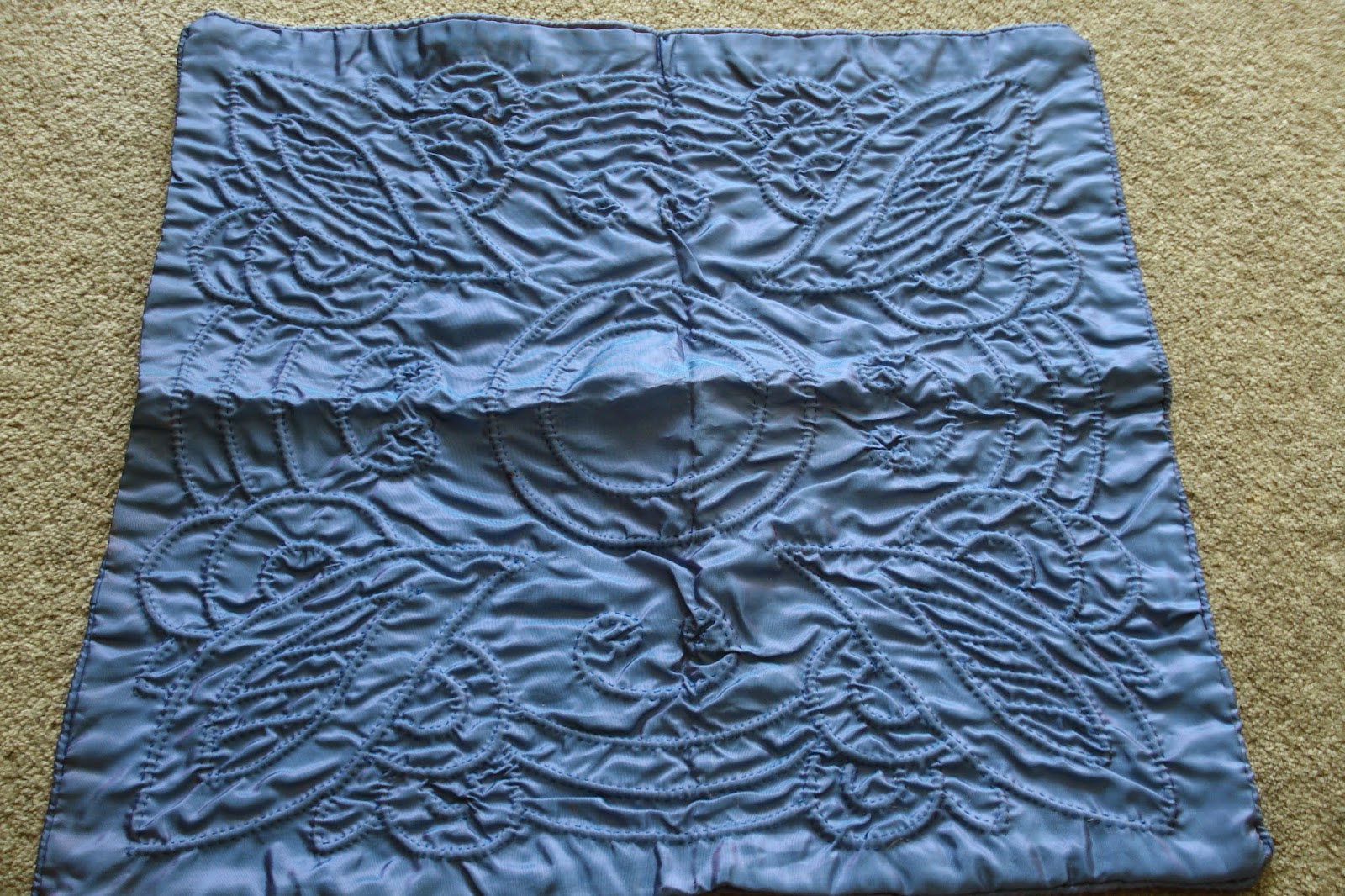 This seller also provided a corded cushion....most that I have seem to be in a brown colour (must have been the fashionable colour!) but this one is in a blue fabric....rather creased ,but looking unworn...an abstract pattern... 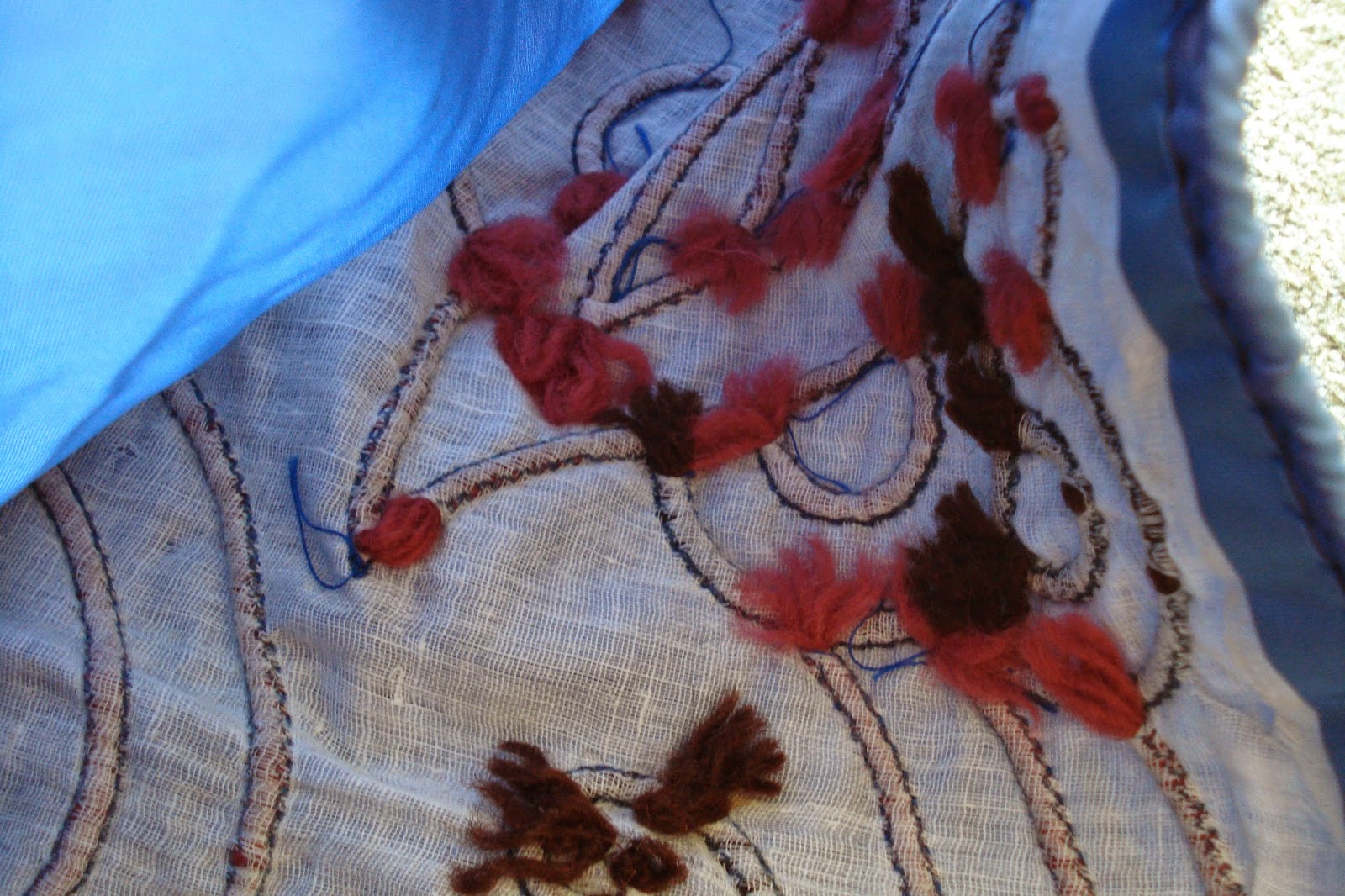 Here, on the reverse, you can see the stitching for the channels, and the yarn of different colours that has been inserted in the channels. 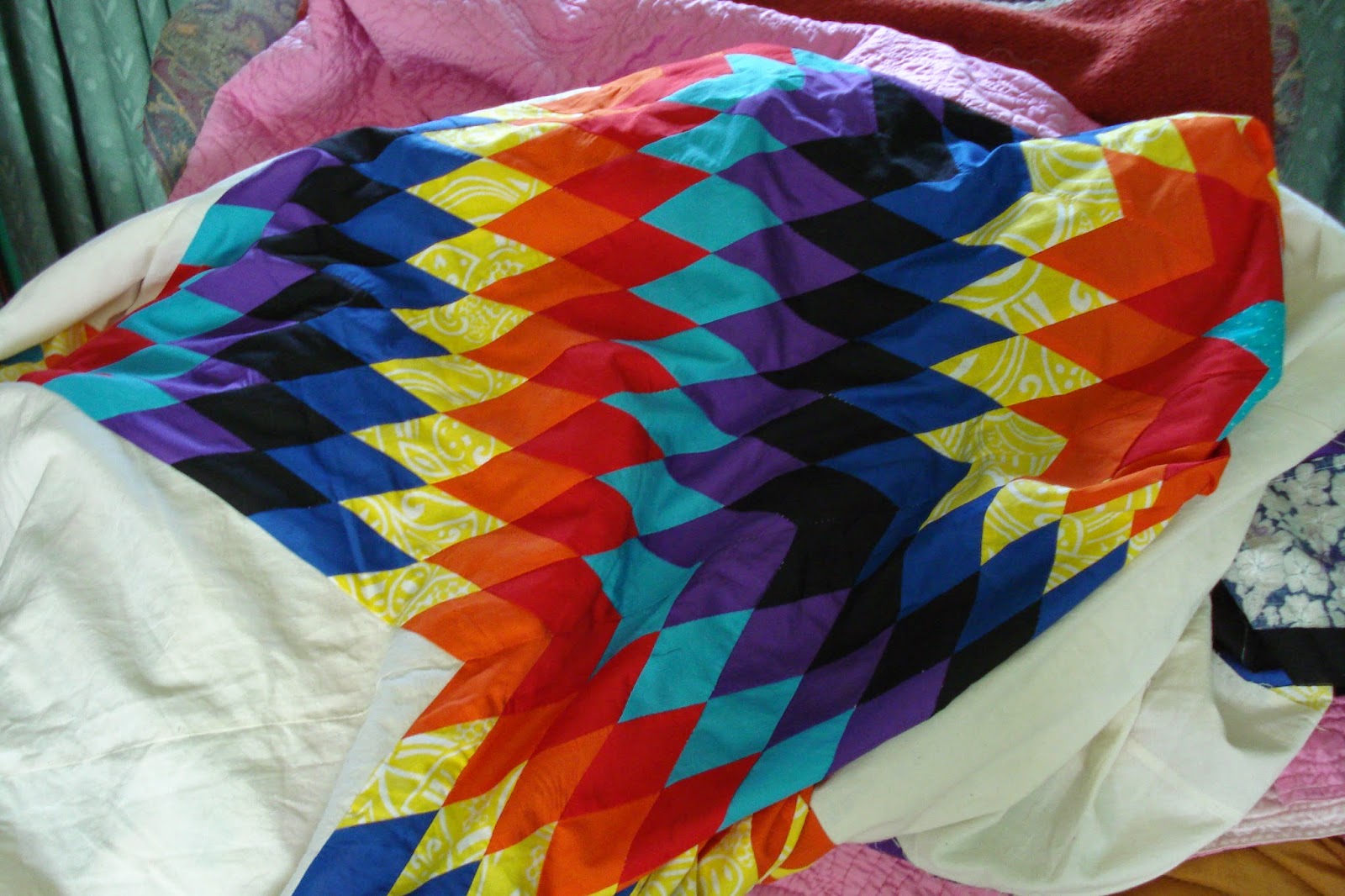 I bought this vintage quilt top recently....it is from a house clearance in London and has no provenance, but has a look of the 40s or 50s to it...also looks like treadle sewing...nicely pieced although the colours are a bit loud! There are both plains and prints here...

I like lone stars...we don't have many family quilts, but there is a lone star in 30s pastels, made from factory offcuts. The fabric was given to a neighbor, who pieced two quilt tops...she kept one and gave one back to Mothers family in Oklahoma. 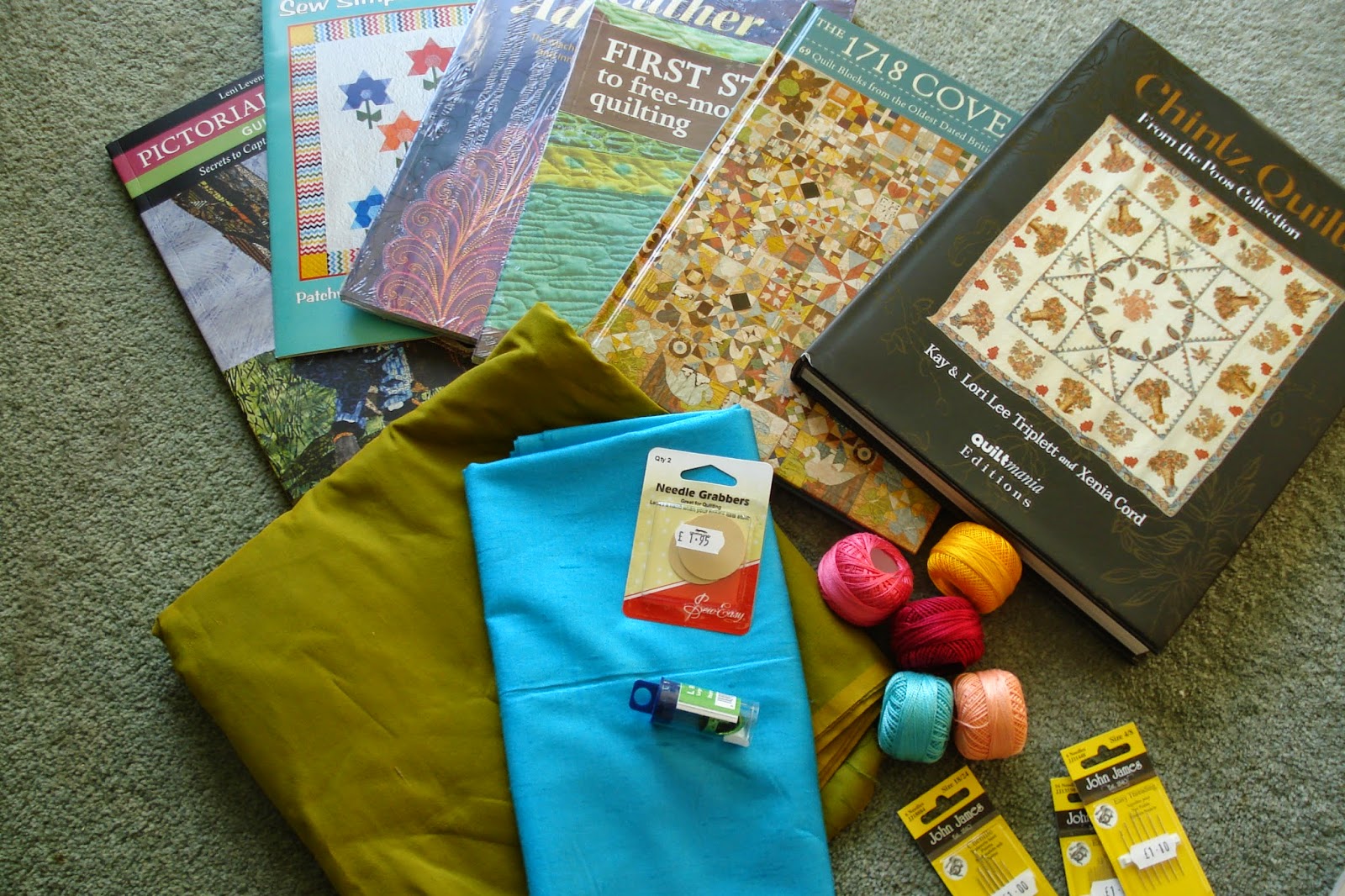 I am not sure how to quilt this top...one idea was to use "big stitch" quilting....also known as utility quilting. At the Festival of Quilts, I bought a selection of perle cotton, plus some suitable needles. I think that this would take a fair bit of practice to get it looking right!

So instead, I am practicing my machine quilting...feathers....they are getting better....using rayon threads......I think that I will have to practice with light coloured fabric to see which colours of thread would look attractive on the quilt I'll first "nail it down" by stitching along the seam lines with invisible thread...then do FMQ where possible.

One discovery...spray basting doesn't work very well for me.....although I was very careful, the fabric has rucked up and puckered along the feather spine......not nice.....back to the old fashioned safety pins and the living room floor for me... 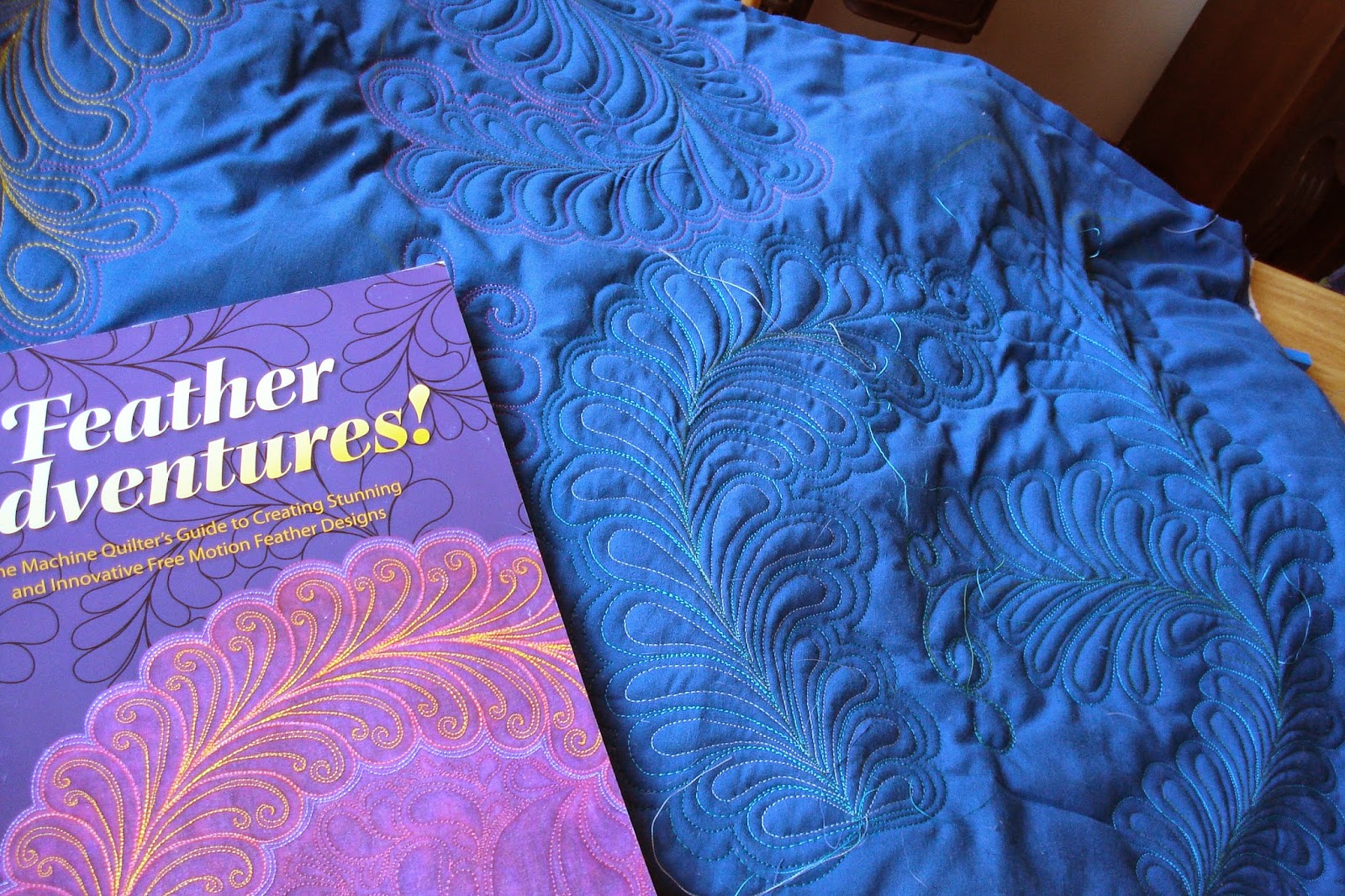 Vintage Books on Quilting and Textiles

I have recently been buying books on the history of crafts, and also the WI. Many have interesting illustrations as well as text, which will come in useful for my research. 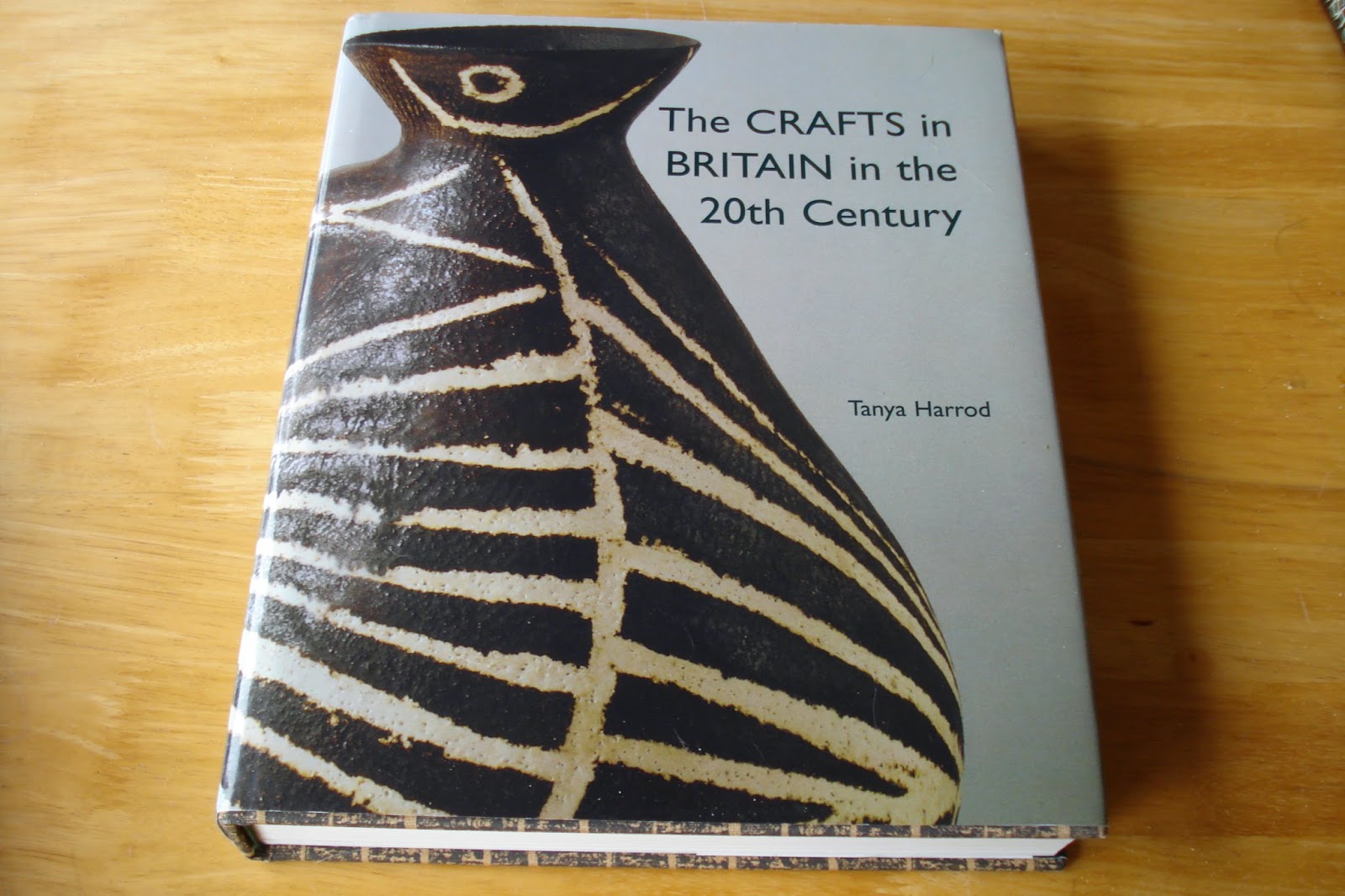 Here is a book which accompanied an exhibition on British crafts in the 20th century, by Tanya Harrod. It covers the periods1916-1939, 1945-1969 and also 1970-1990. A huge, well researched book which will be a valuable resource. Many different crafts are covered,  including textiles. Much more than a coffee table book, with a price to match. 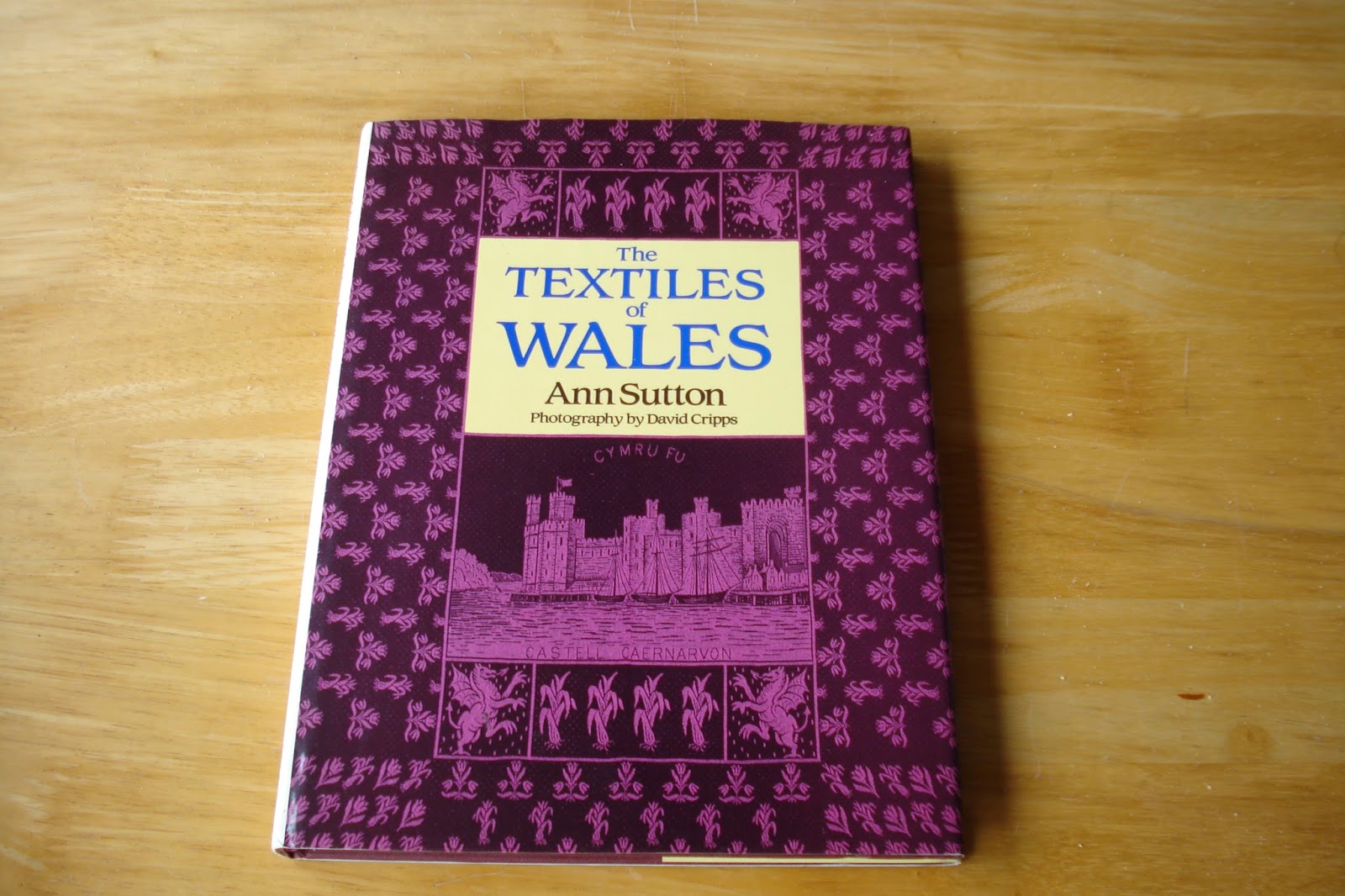 A book on the Welsh wool textiles. Quilts are only briefly mentioned. Some interesting photos... 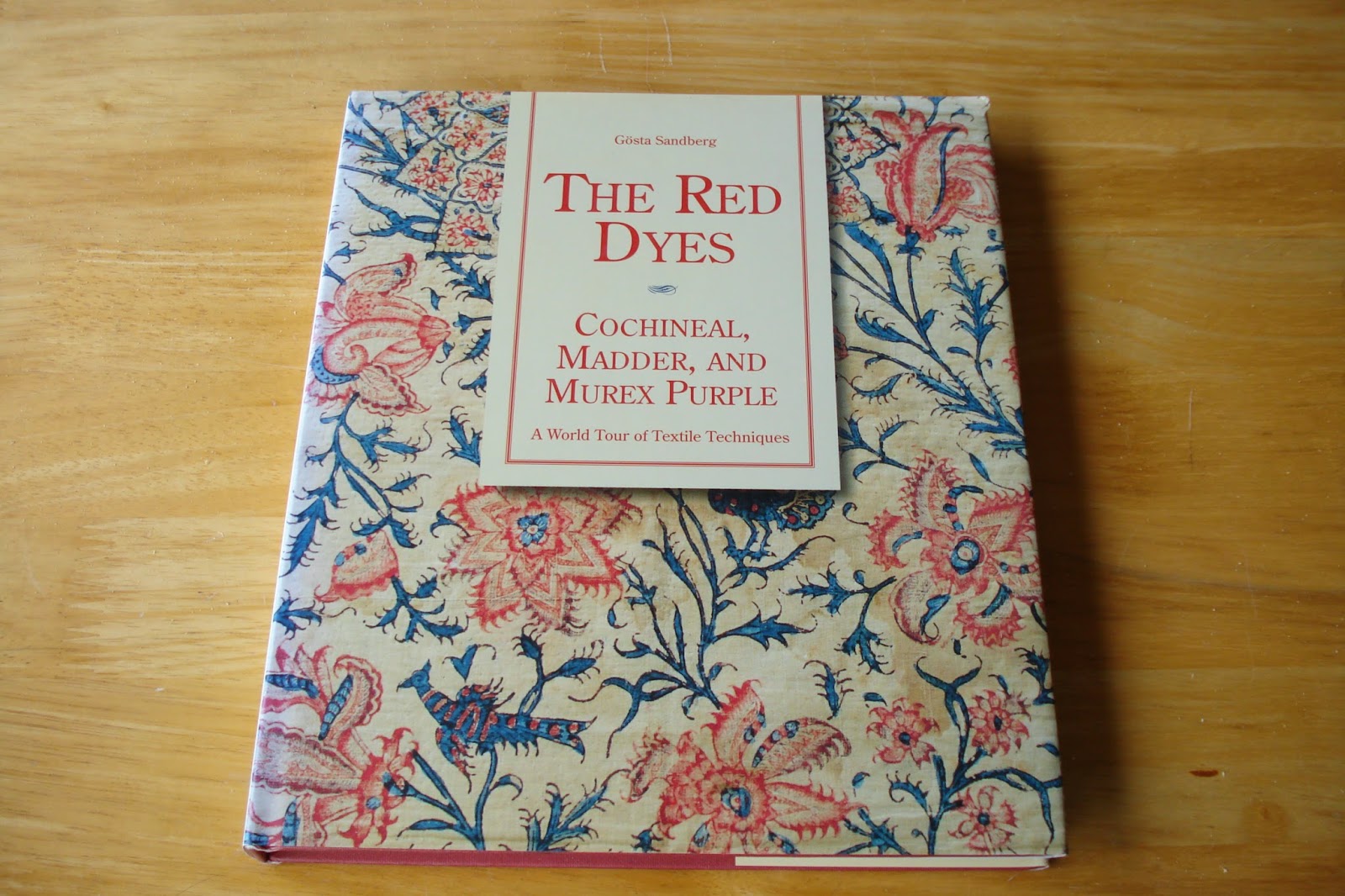 A book on red dyes -cochineal, madder and murex....wide range of dyes and fabrics from around the world... 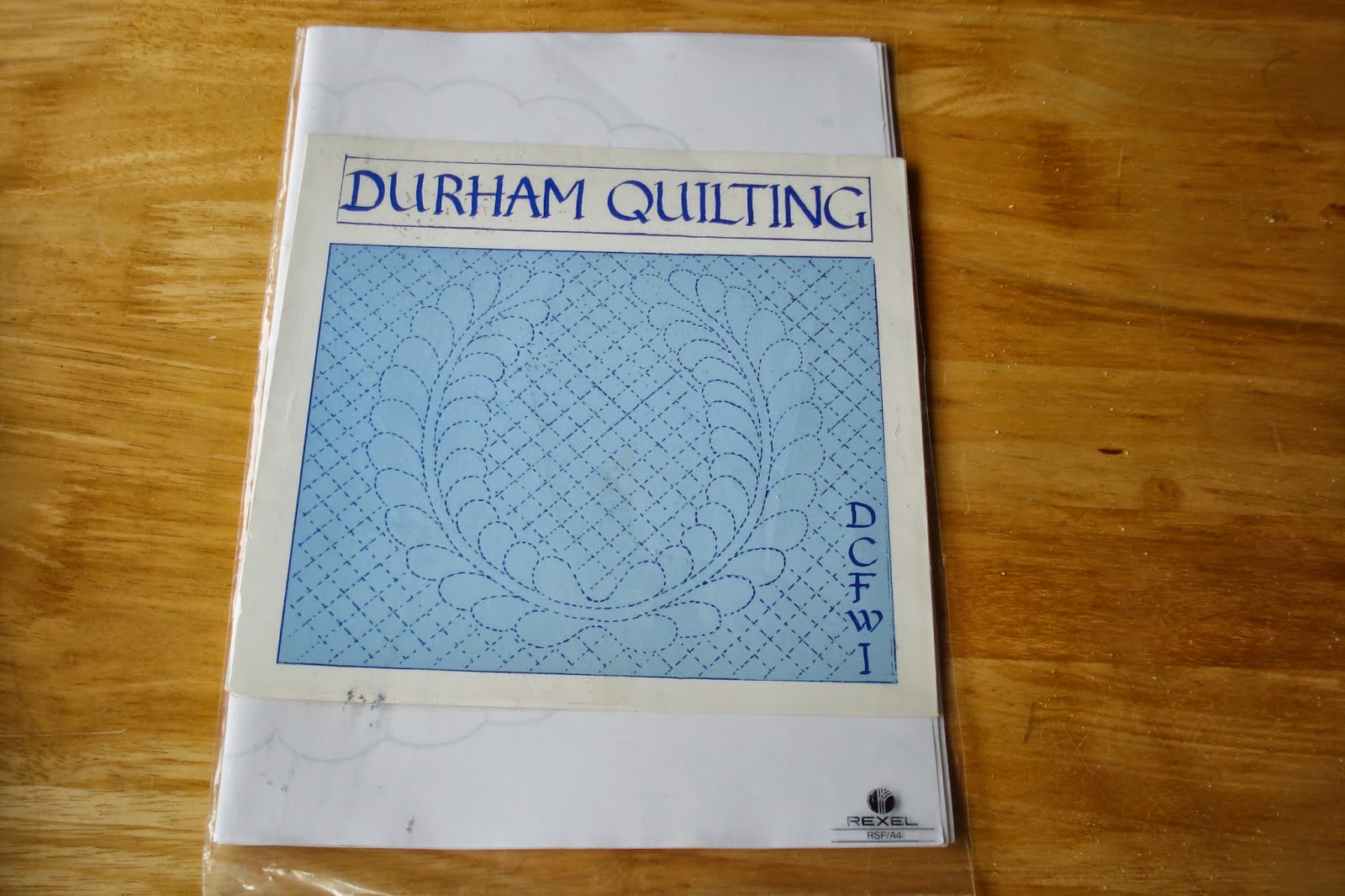 Durham County Federation WI booklet....very brief, and came with extra templates....I have many of these templates already, as The Quiltery used many of the exact designs in their packets of quilting designs, apparently without permission, or perhaps the templates were not covered by copyright? 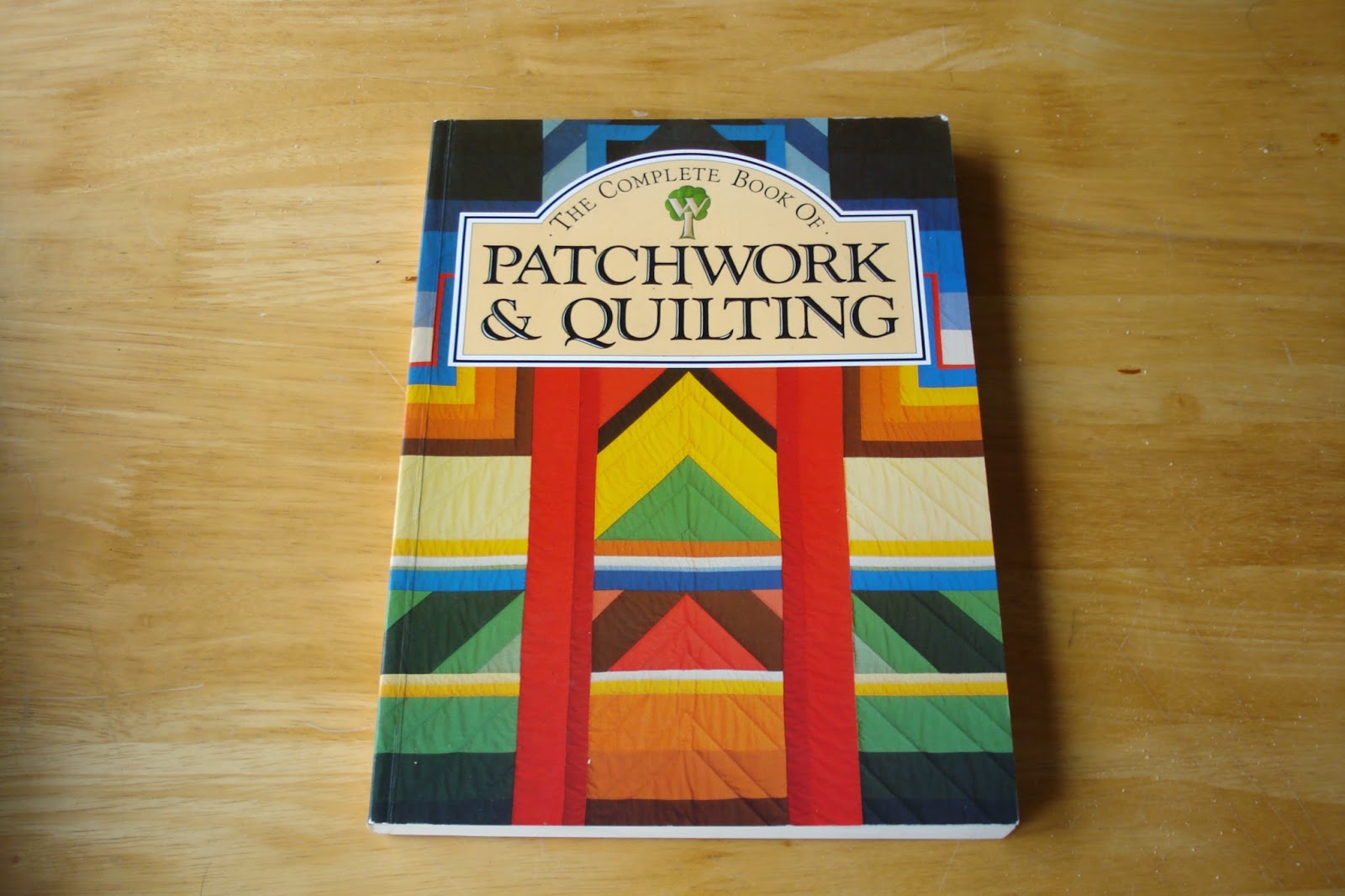 I have seen this book for many years, but it was not of interest to me; published in 1985 it concentrates on english paper piecing, American patchwork and applique. This seemed very old fashioned at the time and I was ready to get on with newer things..now it is of historical interest. Some traditional handquilting designs are shown but the American influence in quilt design and technique is clearly evident by this time. 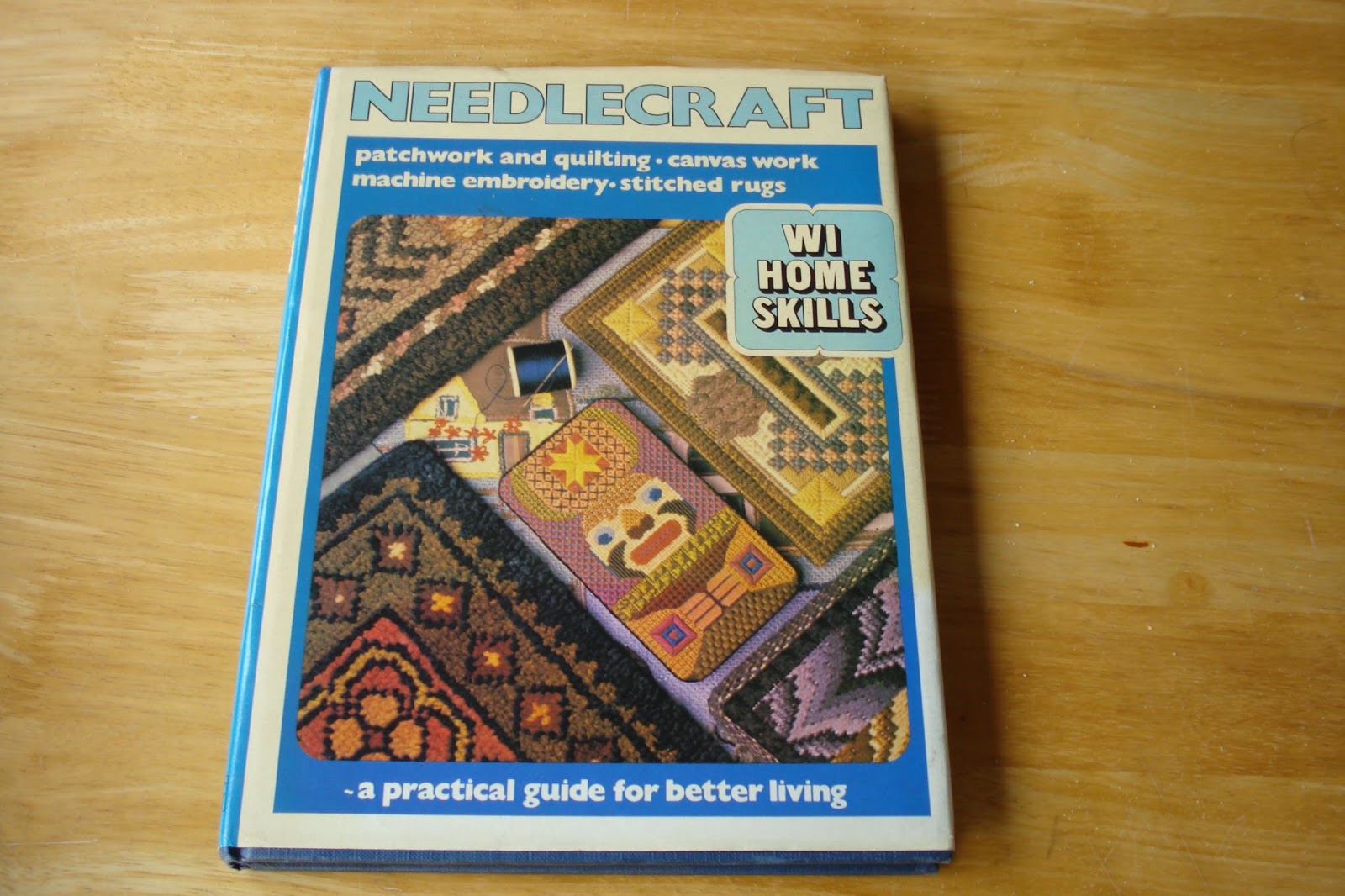 A NWFI publication from 1979, this has a section on patchwork and quilting, which concentrates on piecing over papers. Hand quilting is covered in 6 pages, and illustrated with perhaps the worst example of quilting that I have seen in a long time! Very representative of post WWII quilting.... 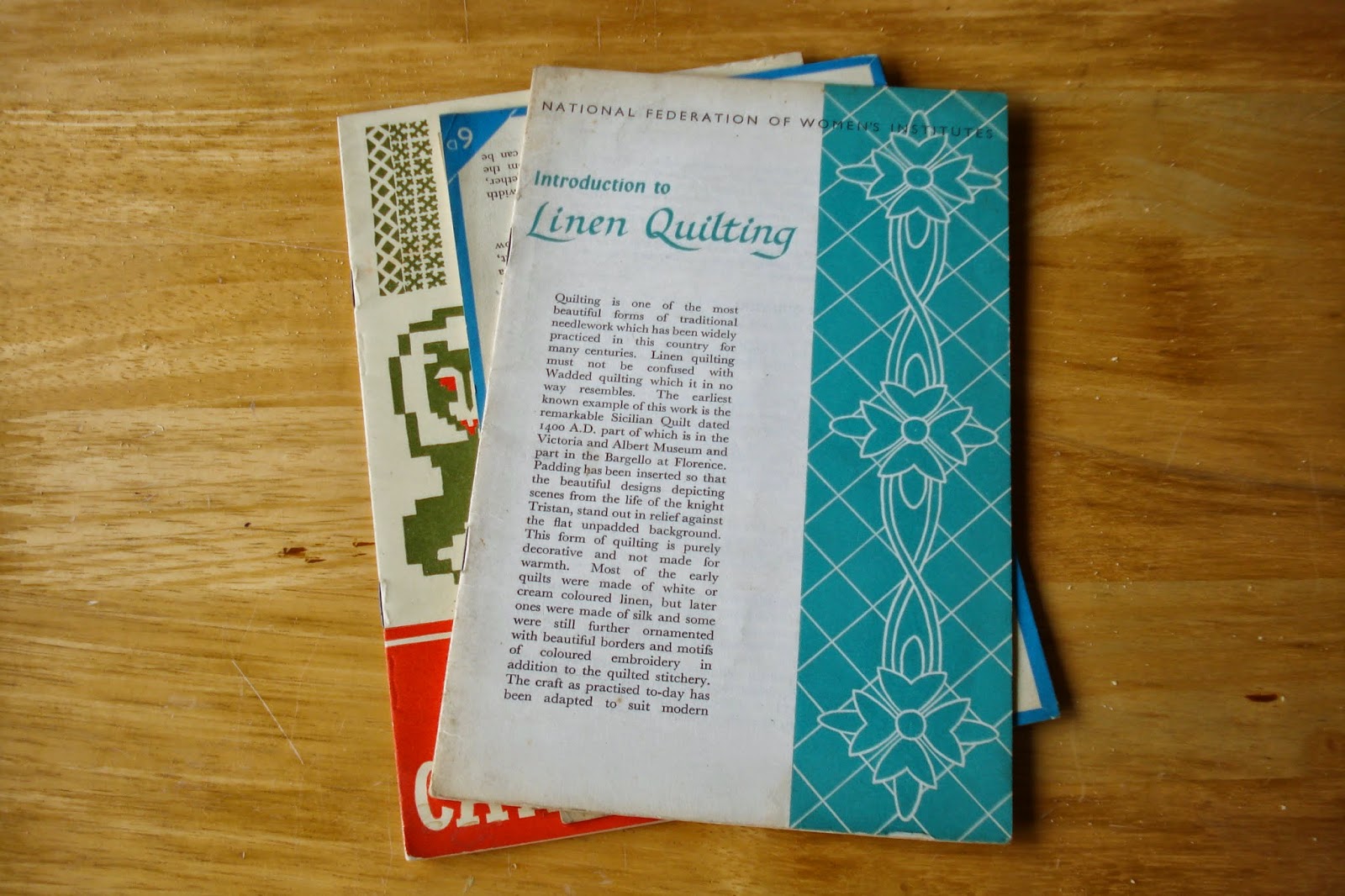 More WI leaflets...I wasn't sure if linen quilting would refer to the fabric or to bedclothes/sheeting, but it seems to be quilting using linen cloth. Covers "flat quilting" (no padding), corded quilting and padded quilting. Published 1964, price one shilling (5 pence). In this bundle were also leaflets on canvas work,
Eiderdowns using sheepswool and terylene, and how to make soft lampshades.

Anf finally, a book on WI textiles...the result of a survey on textiles from the various groups around the UK. mostly banners, tablecloths and other textiles used at WI meetings, but does include some quilts. The WI was instrumental in keeping quilting going after WW2. 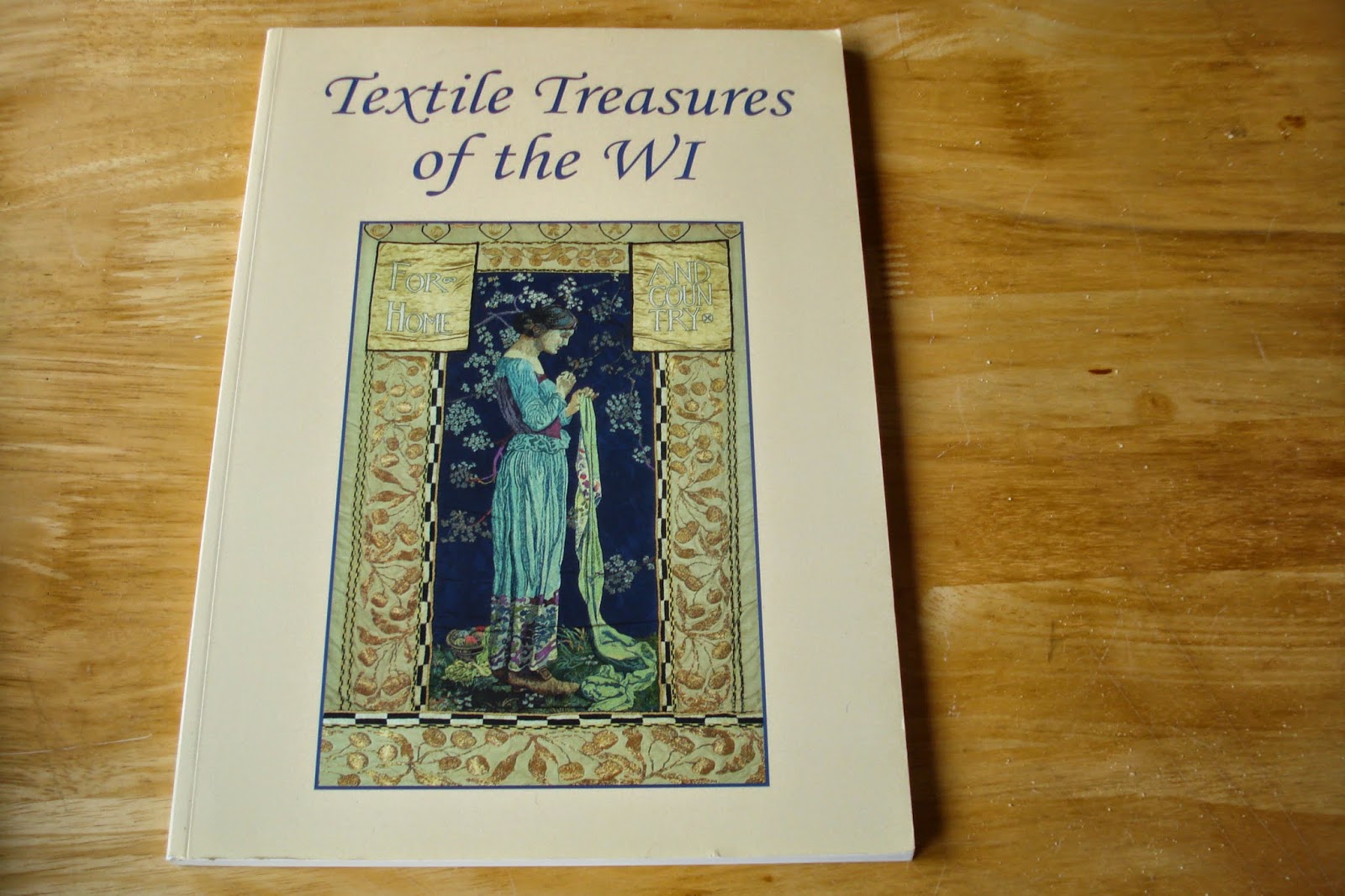