I thought it would be interesting to post photos of the Quilt Museum's display of small quilts at this year's Festival of Quilts....I got permission to do this, of course. 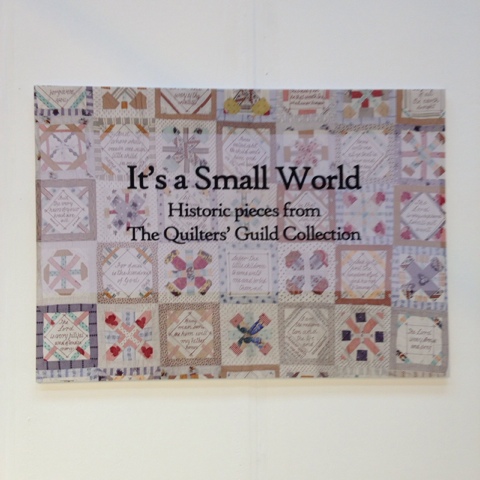 It is of baby and children's quilts from their collection. 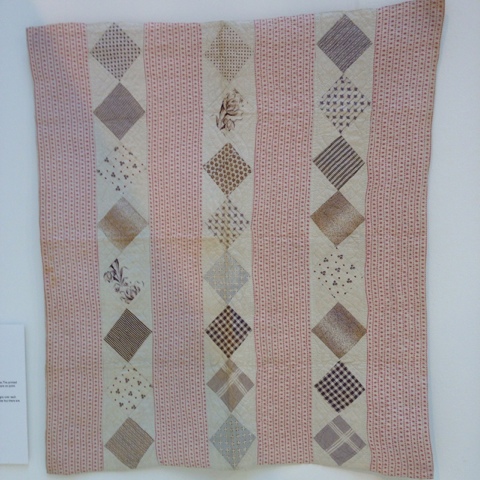 Strippy cot coverlet maker unknown. 1900-1910. Hand quilted with different designs over each strip; cable, leaf and wine glass quilting patterns are difficult to see due to the printed fabrics. 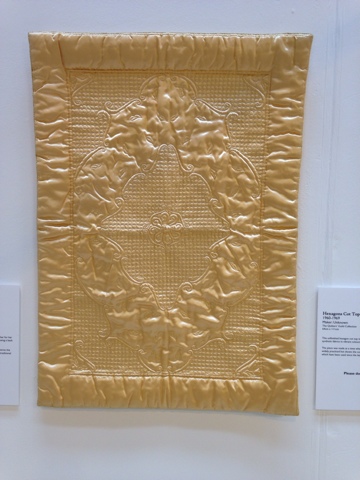 Wholecloth cot quilt ....1954, maker unknown. Made by a grandmother for her grandson at the Royal School of Needlework using a back stitch. 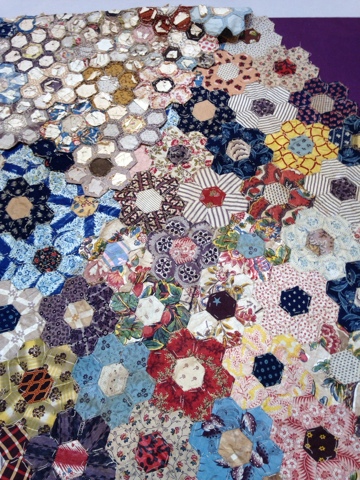 Small sample from the handling collection...hexagons over papers.... 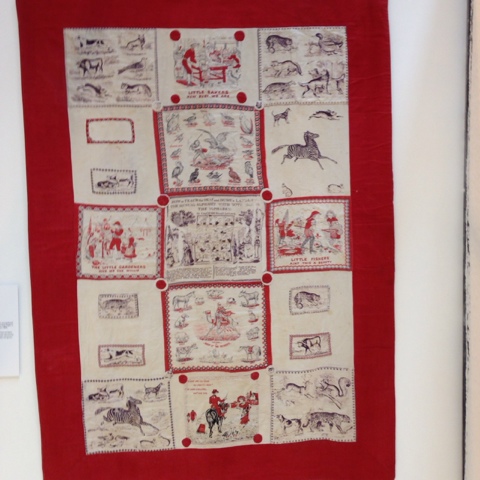 Childrens handerchief coverlet 1875-1900. Printed cotton hankies have been pieced, cut out and appliqued to create this coverlet. Printing illustrations on handkerchiefs began in the 1700's and they were increasingly popular during the 1800's. Childrens hankies were often printed in Turkey Red and black like the ones here. They could include educational and moral messages as well as nursery rhymes, fairy tales and games. 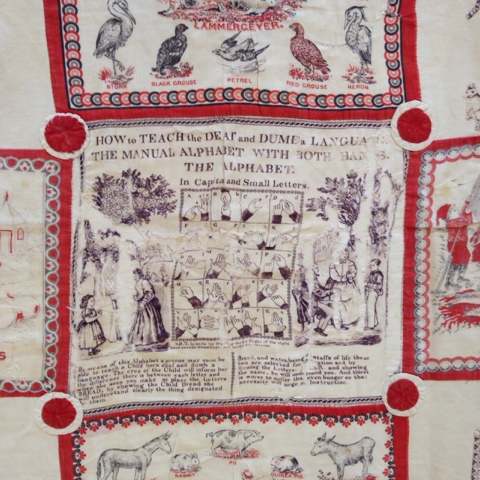 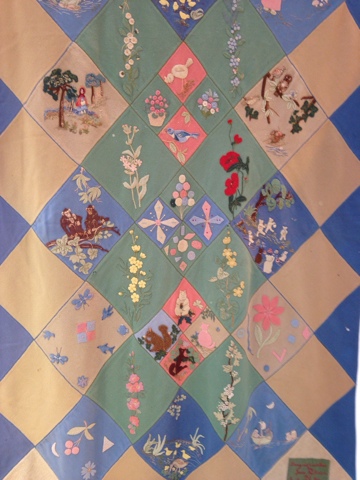 Cot quilt made during WWII, when fabrics were scarce, this childs quilt seems to have been made from woollen pieces and embroidered. 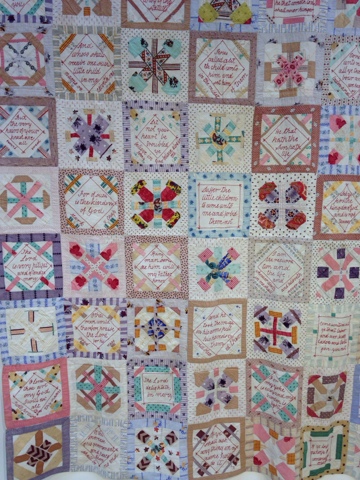 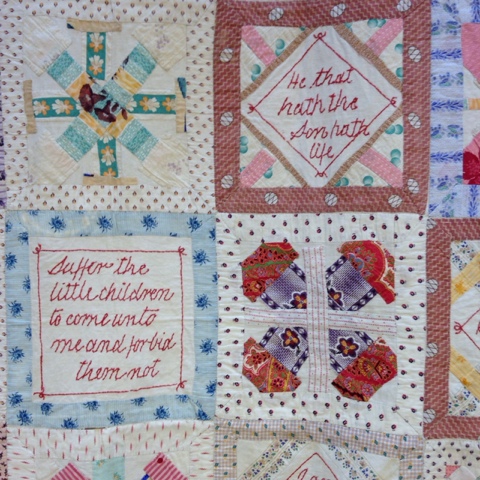 Bible verse patchwork coverlet....1872, made at an infants school in 1872. Needlework was considered an important skill for girls; embroidered verses also reinforced the prevailing morality of the era. 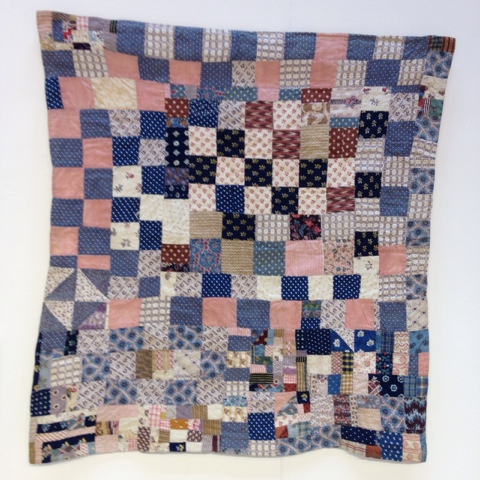 Squares mosaic cot coverlet. 1825-1850. Hand pieced coverlet includes patches of fabric with woodblock patterns from 1780's. These older prints have been combined with roller printed cottons from the 1800s. Indigo has been used for blues and madder for the reds and browns.
And below....Log cabin coverlet 1850 -1900. Strips of dress and shirt fabrics have been pieced around turkey red squares to create a "courthouse steps" pattern. 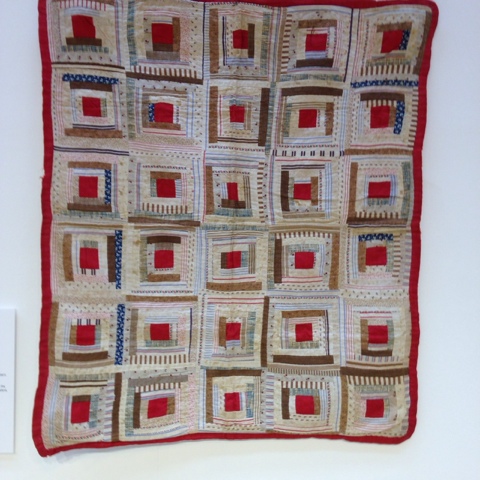 This year at the BQSG stand, we are having a display of cot quilts, to fit in with the Quilt Museum display (which is always adjacent to our stand). Liz Nally suggested this, and is showing several of her Durham cot quilts. In addition, Liz has prepared patterns for two of the cot quilts to sell as a fundraiser for BQSG. So I have also sent four of my cot quilts for display.....and included a pattern for my purple Welsh cot quilt, which is based on a 1930's pattern for a nightdress case... 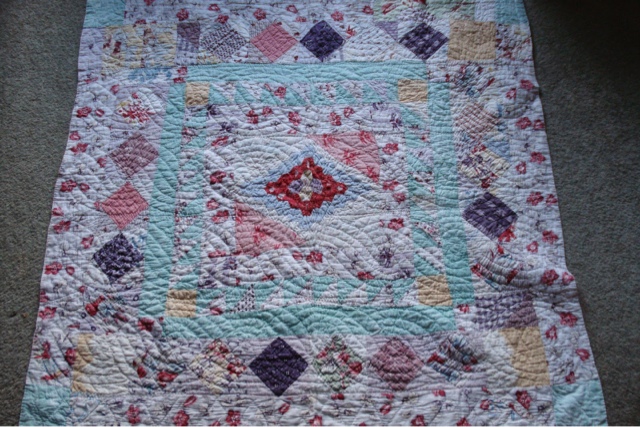 The little Saltburn cot quilt, made with all manner of scraps, all hand sewn... 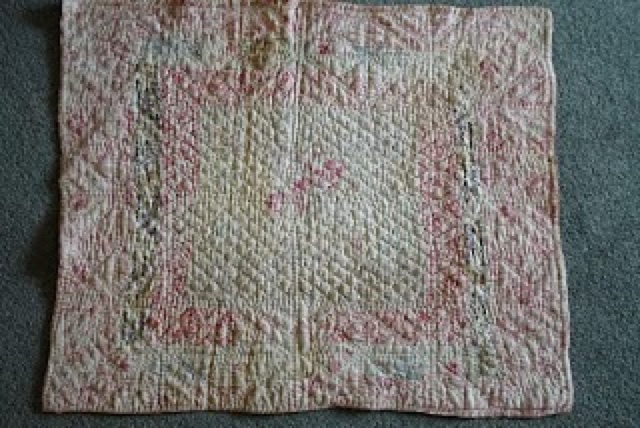 A much used cot quilt from Cardigan, quilted in the Welsh manner... 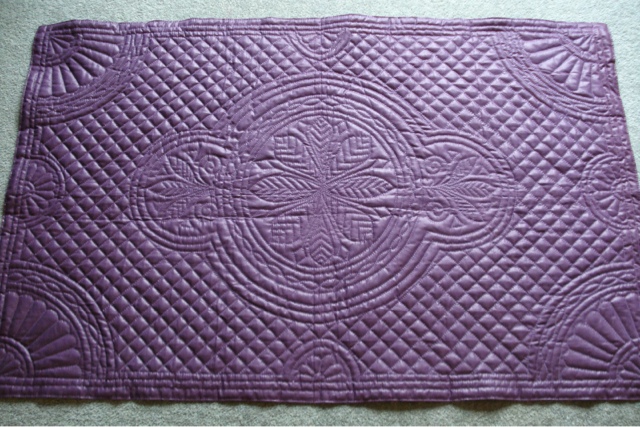 And the purple cot quilt with Welsh designs.

I could not lay my hands on the little Hywel quilt...so I have included an applique cot quilt with a central tree and two animals that look like dragons?

I hope to see familiar faces at the FOQ, I will be there on the Saturday and the Sunday. Staying at the usual place in Solihull.....