Here is a throw that arrived yesterday - it is a summer throw, as it has no wadding. It is not quilted. The colours are very bright and it must have never been used, or very seldom.

The throw was very simply made - matching pairs of strips were seamed to another pair of strips, and the process continued across the throw. The throw is completely reversible, each strip having its twin on the reverse side. The throw measures a hefty 88 x 102".

The turkey red fabrics are so cheerful! 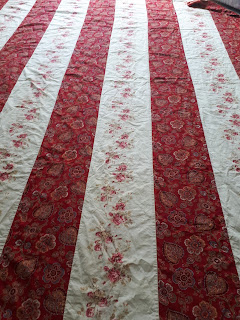 A part of this very large throw. 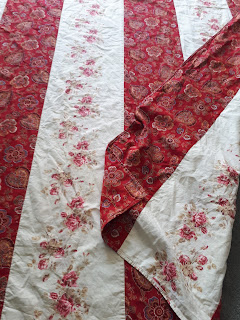 Teamed with the turkey red fabric is an inexpensive fabric with roses and leaves. 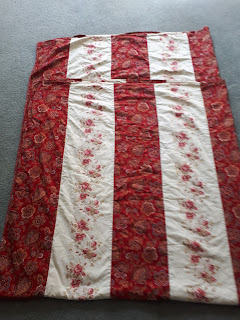 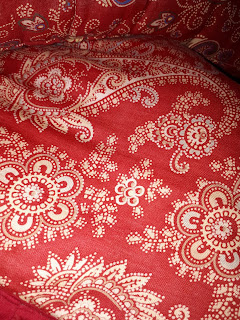 The interesting thing is to compare the unused fabrics in this throw with well worn fabrics in other quilts. Here, we see a Turkey red fabric that has received a lot of wear - the red and white hold up, but the overprinted yellow, green and blue are almost entirely lost. 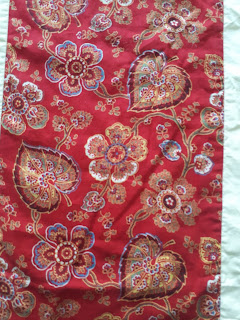 Compare this with the vibrant colours when new! 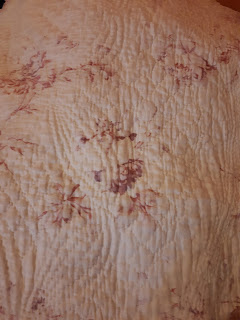 Again, with a well-worn quilt, one can only guess what the original colours and patterns were... 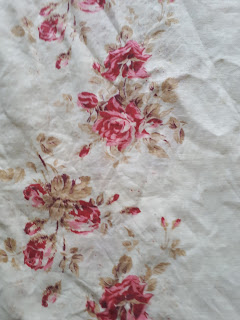 Whereas, in the unused throw the colours show delicate roses and foliage. 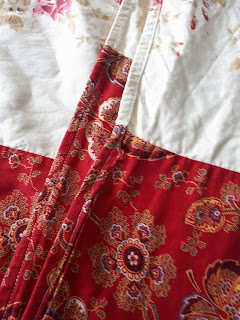 The edges are simply finished by over sewing.

This throw was languishing under "bedspreads" and was bought very cheaply. The seller was from Cornwall, but the throw was originally the property of her grandmother from Yorkshire. This pretty well settles the question that I originally asked myself - Welsh or North Country? Definitely North Country - but in the absence of quilting patterns it would be difficult to tell otherwise...apart from the width of the strips...
Posted by Pippa Moss - Welsh Quilts at 17:06 No comments:

The Patchwork of My Life - Pippa Moss, in June's Popular Patchwork is now on the newsstands. Although a few small errors crept in, generally I am pleased with this. The layout is lively and my photos have turned out well. The text has been modified and simplified, but still has my "stamp" on it. This is pretty much the first time that I have dealt with editors other than academic ones - so an interesting experience! And, I was pleased to give the people at Penyrralt Farm some publicity for their gypsy caravan; it made a good photo. 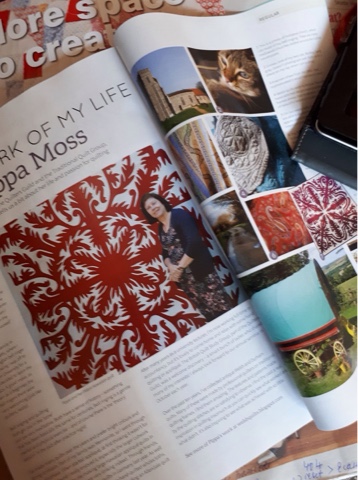 I also have been dealing with the folks at Thames and Hudson, for a V & A Patchwork book, with three hopefully fairly easy projects.  And, shortly, there will be an article "Quilt as Desired" in Todays Quilter. That will be written on the basis of a telephone interview - so it will be a surprise to see what makes it into print! I have again sent lots of photos of various quilts and quilting motifs. Patchwork shows up well, but the wholecloth quilts don't make for very exciting photos, I'm afraid.

I also have a small cot quilt in the Jen Jones Quilt Museum - looking forward to seeing that exhibition in July when we go to Wales again.
Posted by Pippa Moss - Welsh Quilts at 18:54 1 comment: