Here is the fabric that I am intending to use on the reverse of my Welsh quilt (two lots-enough for two quilts, then). It was bought as a "vintage paisley quilt or throw" and I paid just £20 for it. The dealer confessed that it was not very old (she thought possibly 70's but definately not victorian) and did I still want it? Well, I just love red paisley fabrics, of course I had to have it!! Besides, modern repro cloth would cost more than this...

The two sides of the throw were each made of four yard long red paisley fabric panels, sewn together, to make an interesting pattern. Each side is different. The throw itself had not been used but was very poorly put together. So I had no compunction in unpicking it to reuse the fabric. Also, I was able to inspect the construction and inspect the wadding.

The throw was very simply made - the three layers had been put together, wrong sides together, and then sewn around and turned inside out (the envelope method). This was then sewn around again. The sewn edge was folded in and top stitched to make a bound edge. But it was very rucked up and had not been carefully sewn. The inside was a length of white woolen cloth with a twill weave. 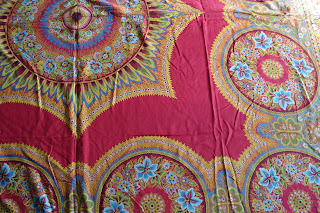 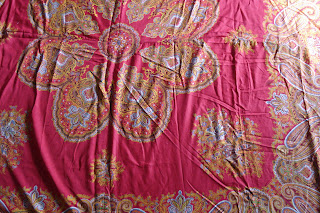 A more sedate red paisley, I will use this fabric for the first quilt...central design has a flowershaped design and the paisley is more classical in appearance...
Jen Jones has a quilt museum in Lampeter's former Town Hall - which I very much look forward to seeing one day. This year's exhibition was of quilts made with paisley fabrics and also paisley shawls...two quilts looked similar to my fabrics and were made from the paisley panels, but in different designs, of course.
I sent a copy of the two photos to Hazel at Jen Jones to ask the age of the two quilts on display - here is her answer:
"We have two paisley panel quilts in this years exhibition - the one most like your fabric has provenance and came with other quilts from the same family (different generations).
"Bold paisley Panel quilt" made in 1880 by Ann Lewis of Whitland (prolific quilting area).
The other paisley quilt has been dated as 1890. Hazel"
Now, these fabrics were popular and were likely to have continued to be made for some time. But it appeaars that the fabric is older than the 1970's - and even if not older than the 70's is well in keeping for the era 1880/1890 that I most admire. However, my feeling is that the fabric is older - the sewing did look like a treadle sewing machine(hard to explain why, it just looks that way) and may be from the 20s or 30's. It is always difficult to find good backing fabric but in this case the paisley panels will really add to the appeal, and, make the quilt truely two sided. A lucky find.....
Posted by Pippa Moss - Welsh Quilts at 14:52 5 comments:

Mary Jenkins has a new blog, which is called Little Welsh Quilts and other Traditions, it can be found at: http://www.littlewelshquiltsandothertraditions.blogspot.com/

Mary is the co-author of Making Welsh Quilts and is interested in Welsh patchwork quilts, vintage fabric, Welsh samplers and more. She is in the process of writing another book; I shall look forward to seeing this book! 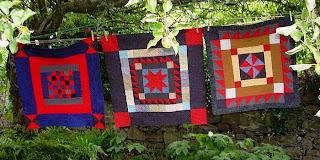 Some of Mary's little quilts from her header photo -how lovely are these!!


I am looking forward to following Mary's blog.

Sorry that I have not posted anything recently. We went away for a week's holiday and as you know, not only does it take a week to prepare to go and finish work in preparation, but it also takes a week to catch up on things. Our holiday this year was to North Cyprus, on an Explore walking holiday. The walking was moderate, the weather warm (over 30 degrees) and the group a friendly one. We stayed in a pleasant hotel near Bellapais above Kyrenia. As you know, about 30 years ago there was a war between Greece and Turkey, and the country is now divided. Most of the Greeks fled to the south. There are still clear signs of this conflict - most noticeably many army outposts and a demilitarised zone, but also many unfinished houses.Whether this is due to the burst housing bubble or uncertain legal title (much property was originally owned by now absent Greeks) I am not sure but entire holiday villages stand empty or unsold. 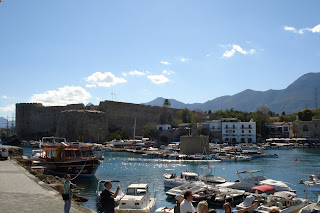 Kyrenia harbour, where the castle has a museum with a trading ship found locally, very well preserved and much older than the Mary Rose. 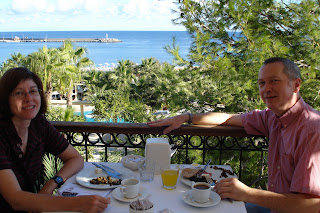 Breakfast on the terrace!! Mike and I. 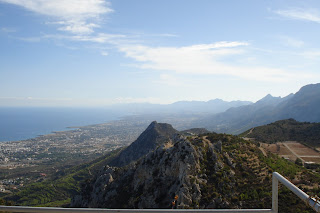 View from the top of St Hilarion Castle - one of three crusader castles we visited - this one only had 450 steps - we walked down towards the sea after this... 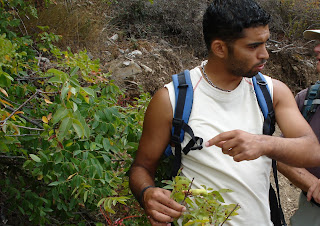 Our guide Geyza - he is a graduate in tourism, has jobs with three different companies and is saving up to start his own company. He learned his English at college and also with his aunt in Hackney. Here he is pointing out that these are not pods, but insect galls, nursery to a sort of aphid I think..... 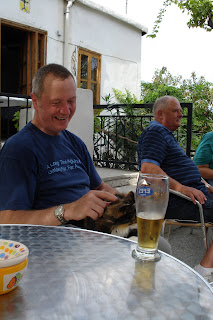 Beer after the walk!!! 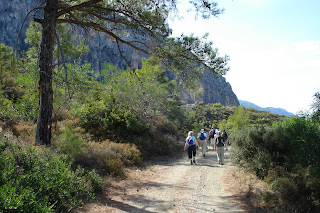 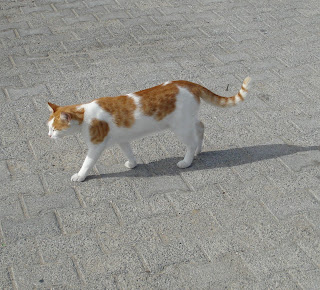 There are many stray cats and dogs but most seem looked after by shopkeepers, boat owners and restaurant owners. Kyrenia has a local animal rescue centre that inoculates and neuters the animals, which has seen a drastic reduction in strays. 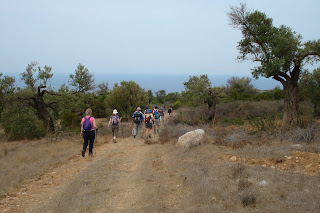 Walking through olive groves - we saw the olives being harvested by local people, with nets and long canes. The local olives are small and are crushed before being pickled. 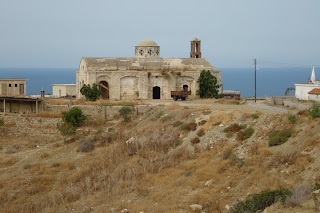 An abandoned church. You can just see on the right the new mosque. Most of the Greeks are Orthodox Christians and the Turkish people who remained are Muslim (although not terribly religious). Unlike Morocco, we were allowed into the mosques which was very interesting.

I have some interesting quilt-related news, so will sign off and hope to take some photos of quilts tomorrow.
Posted by Pippa Moss - Welsh Quilts at 18:50 3 comments: