More photos from the week in Staffordshire/Derbyshire. 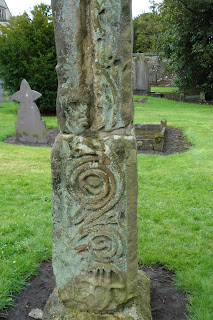 A stone Cross, very old, with Celtic designs upon it in Bradbourne Churchyard - notice the "cup and ring" designs which are very ancient and universally found in Celtic art. These are very similar to the Welsh spirals. 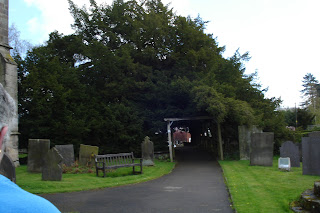 A giant yew tree, over 1500 years old, in Doveridge Churchyard. There are many old yews to be seen in this area, and yews are among the most longlived trees in Britain. This one seems to be a clone of trees,arranged in a semicircle with a hollow centre, the original tree having died. Its branches are propped up on all sides. Yew trees have poisonous berries, which may be why they are mainly to be found in churchyards well away from livestock. Yew trees also provided wood for the famous English longbow. It seems probable that these areas were pagan sacred sites that were appropriated by the Christian church. 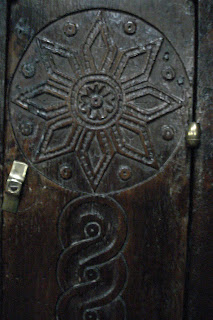 Carvings on old pews in, I think, Alstonefield church. Most churches have pews of a more modern date, as seating in churches was "reformed" several times. It was deemed most important was that there be seating for the poor, where annual fees need not be paid; the Victorians installed new seating and enlarged churches. Of course churches were packed in those days, today I expect that there are more than enough spare seats for services....this carving reminded me of the motifs shown in many Welsh quilts. 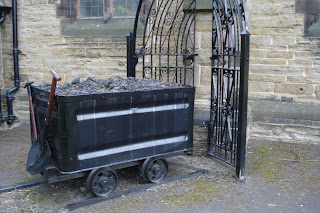 Coal carts in Silverdale churchyard, a reminder of the local coal mines that were formerly so important to the local economy. Presumably, ironmongery is represented by the gates in the background. 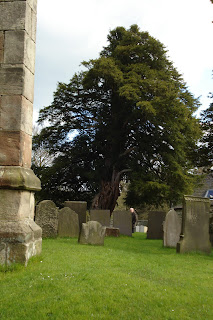 Another giant yew tree at Ellastone Church, one of several at this church. 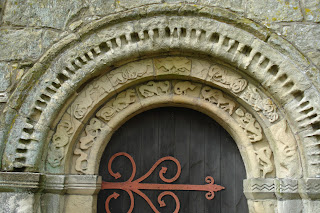 A beautiful door at Bradbourne Church, with carvings of animals real and imagined around the arch. 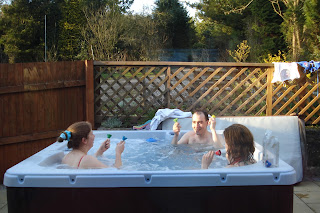 A final photo - ringing handbells in the hot tub!! Molly Jonathan and Faith ringing handbells - just to note that these are toy plastic handbells and not the real (and rather expensive) bell metal handbells. Considering that they are an inexpensive childrens toy, they sound very good!
Posted by Pippa Moss - Welsh Quilts at 10:00