This quilt arrived in a very sorry state! I was kindly given it by Enid Davies of Creigiau, via Nerys Horrocks (a quilter from Essex who I know through the Quilters Guild). 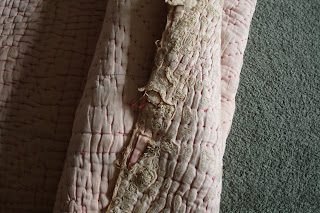 The quilt is very well used and had been sitting in a garage for some time. The first step was to wash it in tepid water and some Synthropol ( a mild detergent). 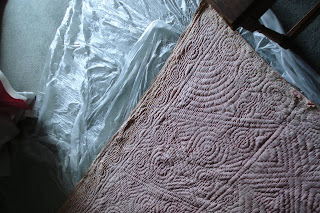 I then spun it to remove as much water as possible and laid it flat on polythene on the floor, turning as often as possible. 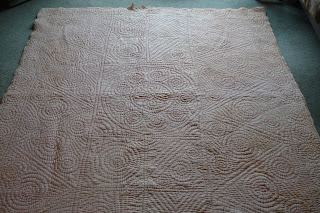 The quilt is similar pink cotton sateen on both sides. It has some typical patterns on it - a central medallion with a four lobed flower surrounded by spirals - more spirals - chevrons - triangles filled with spirals. 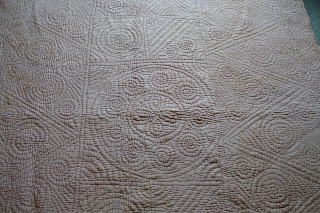 A closer look at the centre of the quilt. 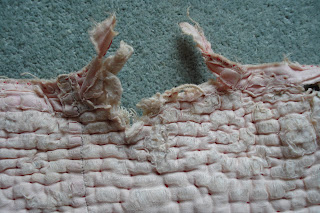 You can see how worn it is at one end, where the worn white woollen blanket peeps through. The ends and corners of a quilt always receive the most wear.

Enid's mother lived with her grandmother who was named Mary Elizabeth Jones. Mary belonged to the Pontardulais group, near Swansea, who quilted commercially for the RIB (Rural Industries Board) in the Depression. Mary helped to make quilts for the Claridges order.

Both grandmother and mother went to classes in the 50's - taken by her aunt Eira Rees. Mostly small items such as cushions were made. Her father made the frames and took them to the classes.

The family still retains the nicest quilt. Other quilts and narrow loom blankets were sold to Jen Jones. This quilt had been in the garage for many months. It is old and the family doesn't really know who made it.

The quilt measures 64 x 78 inches and is of interest because it is very typical of the type of quilt that would have commonly been used on beds at the turn of the century. Many thanks to the family for giving me this quilt.
Posted by Pippa Moss - Welsh Quilts at 10:34