Here is an image which may be familiar to some of you - it is a painting in the collection of the Royal College of Surgeons in London. Painted by Thomas Wood and exhibited at the Royal Academy in 1855, it shows Private Thomas Walker sewing a quilt. In 1855, while convalescing after a successful trepanning operation, he was seen by Queen Victoria during her visit to Fort Pitt Military Hospital. Walker sustained a head injury at the battle of Inkerman in the Crimean War, when a shell burst above his head. A silver plate was inserted in his skull. Here, he is shown sewing a military quilt as part of his recovery. 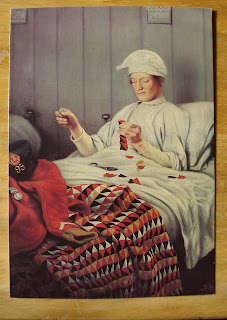 The painting is of interest because it shows the method of making military quilts very clearly. Lest the viewer be in any doubt, his details are written over the bed, and his regiment - the 95th Derbyshire Regiment - is shown by the uniform at the foot of the bed. Walker is sewing triangles of uniform wool together, the colours, red, black, gold and white, neatly reflecting the colours present in the uniform at the foot of the bed. A cloth cap perhaps suggests his head injury.

This painting has been called a "rare propaganda portrait" and was apparently designed to allay public concerns over hosptial conditions for soldiers during the Crimean War. Victoria's visit was probably another attempt to do the same. As you may be aware, Florence Nightengale and others were able to publicise the poor state of many field hospitals, and the need for cleanliness and more careful nursing of the wounded.

Military quilts were prevalent from about 1850 to 1900; at the later date khaki uniforms replaced the colourful wool uniforms and the materials used for the military quilts disappeared. Crimean quilts supposedly have darker, more sombre colurs, whilst the Indian military quilts are more colourful.
Posted by Pippa Moss - Welsh Quilts at 11:00