More photos from the Festival of Quilts... 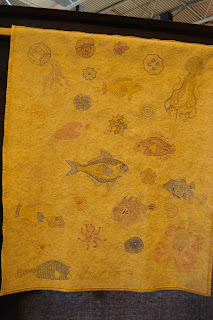 I think this is "Fantastic Fossil Fish" a wholecloth quilt, machine quilted by Harriet Watson of Cambridge. The free machine embroidery and quilting was interesting to see, and reminded me of the marine ceramics I saw while in Greece 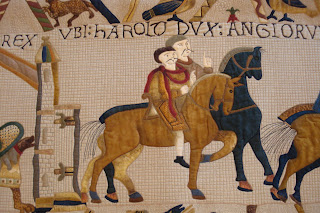 This was a late entry, and did not have a proper entry in the catalog. It is by Pam Holland, who will be replicating the ENTIRE Bayeaux Tapestry as a sponsored project next year. The workmanship was staggering on these - having seen the originals, I was interested to see these quilts. 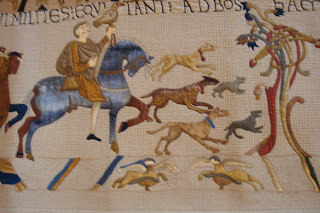 More from the quilt by Pam Holland. 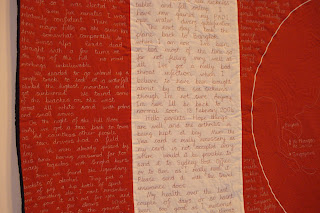 An interesting strppy by Judith Caroline Lynch of High Wycombe. It was a red and white strippy, over which Judith had machine written extracts from her son Nic's emails received from him during his gap year abroad, six months during 2004. A commenmorative quilt that had a lot of people reading the rather hair-raising entries... 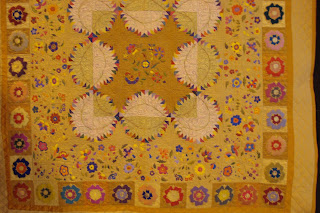 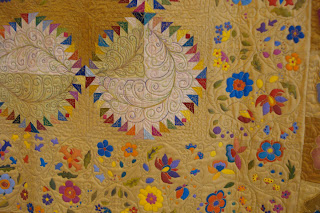 Detail of the applique and quilting on Jane's quilt. 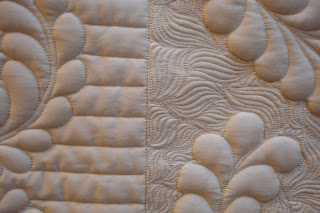 I think this is a detail of a quilt by Robin Fahy of Drumquin. If I have gotten this wrong, please let me know! Quilted on a longarm machine, hand guided. Cotton Sateen and trapunto. The "Mactavishing" made the feathers really stand out. 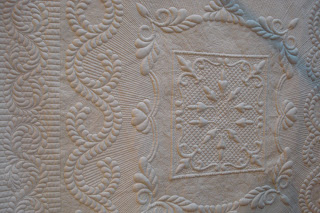 A larger portion of the above quilt. 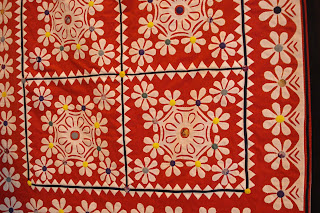