I love going on ringing outings, as one always sees interesting things. Churches are usually old, indeed Mediaeval, and as well as having their old furniture and fixtures, often have things which have found their way into the church as "museum pieces".
Sometimes there are amusing signs as well... 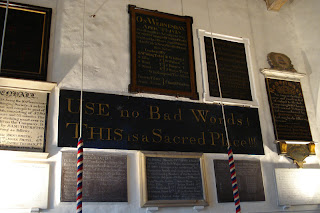 This sign is a very large one - in the ringing chamber at Redenhall - it is directed at the bellringers and says "Use no bad words! This is a Sacred Place!!!" Prior to the Belfry Reform Movement in Victorian times, bellringers were sometimes very rough characters and difficult to control. Bellringing was seen as a recreation which just happened to take place in a church - but the bellringers were not necesarily part of the church congregation and often were not answerable to the vicar. There was sometimes lots of drinking and swearing! One thinks that there must have been a particular problem at this church with the bellringers? 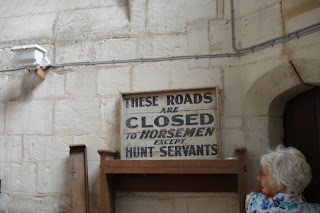 This sign shows just how much things have changed - It states that "These roads are closed to horsemen - except for hunt servants". that is, common people not to interupt the activities of the local huntsmen. 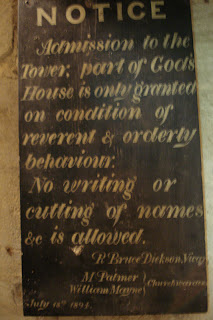 Another sign placed at the foot of the belltower steps and directed at bellringers and visitors to the tower - "Notice - Admission to the tower - part of God's House - is only granted on condition of reverent and orderly behaviour: No writing or cutting of names is allowed"  Carved graffitti in churches is very commonplace and must have kept thousands of bored schoolboys occupied over the years. Some of this graffitti is very old, and is now carefully preserved for its historial interest.
Posted by Pippa Moss - Welsh Quilts at 10:52