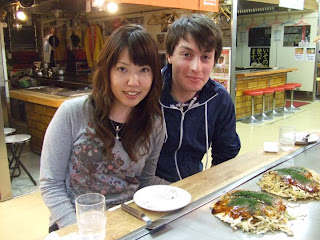 I am really looking forward to January - as my son Tom and his girlfriend Lily (Reiko) are getting married on the 17 January. The wedding will be at Islington Registry Office and then there will be a lunch/reception at the Savoy. Lily's parents will be coming over from Hiroshima and sister Sophie will be coming in from Singapore. Of course lots of Moss family will be there too (about 30 people in all).

This photo of Tom and Lily was taken on their 2011 trip to Japan. 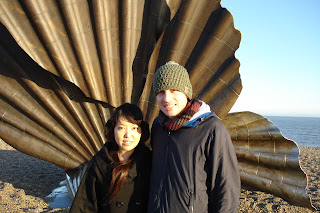 And here is a rather windswept photo taken on Aldeburgh beach last Boxing Day - with Maggi Hambling's Scallop Shell in the background. Benjamin Britten lived in Aldeburgh and this has words from Peter Grimes, his opera, at the top of the shell.. 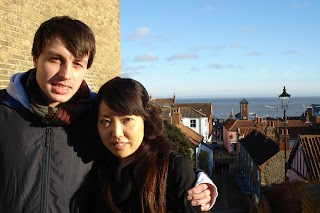 ...and at the top of Town Steps, again in Aldeburgh.

So while Christmas promises to be rather quiet this year, January will be the family occasion!
Posted by Pippa Moss - Welsh Quilts at 12:24