I don't often go for recent quilts, but as this quilt was made by a group that was very local to where I live, I made an exception. It was made as a fundraising effort in 1980. 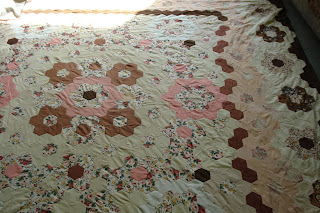 The quilt is not wadded but has a top and a backing. The design is Grandmothers flower garden and it has been made by oversewing papers (English patchwork technique). It is a large quilt at 96 x 104 inches. 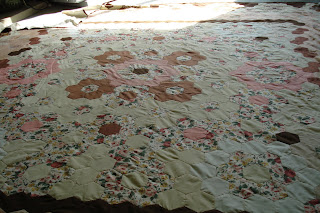 The colours are typically 1980 and I think I know just where the fabrics came from - in Gobbits Yard in Woodbridge, there was a small remnant shop which sold all sorts of fabrics, including similar cottons and furnishing fabric pieces (I moved to the area in 1985). 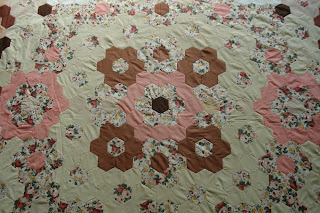 The centre - it has an air of Averil Colby about it as various floral cottons and plains have been used. 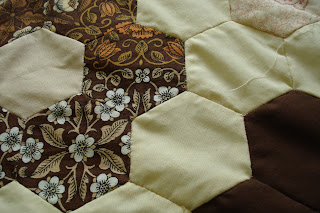 The top is unquilted. The backing is a rather heavy natural coloured cotton. 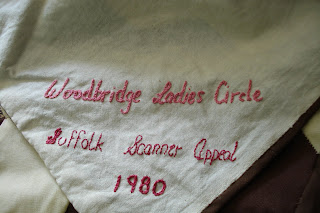 The quilt was made by the Woodbridge Ladies Circle for the Suffolk Scanner Appeal in 1980. The quilt was evidently raffled and won by someone living in Essex as it came from an auction in Colchester along with other items of needlework.

I have tried to make contact with this group but cannot find out whether it still exists locally and there don't seem to be any contact names. Perhaps I need to go to Ipswich Library and look at the EADT archives. I'll keep on trying to find out more about it, as it is a good example of what the tastes of the day were. 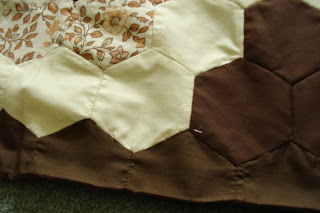 Some of the basting threads are still in place, so the quilt doesn't seem to have been used on a bed. 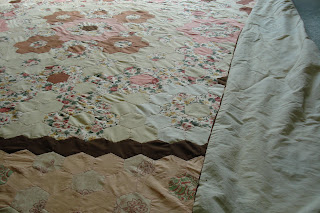 The rather heavy backing cloth. This quilt was probably a group effort by the club and involved a number of women.
Posted by Pippa Moss - Welsh Quilts at 18:26