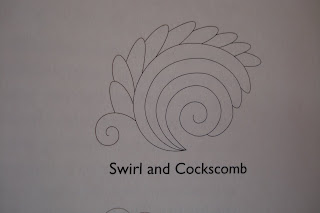 After Andrea's comment, I went away to look at the books on my shelf - here is a design from Osler's North Country Quilts - Swirl and Cockscomb - which looks similar to the motif on the pink and gold Durham quilt - very dramatic. 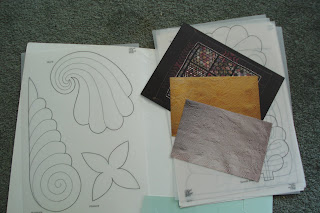 I also got out a "Quilt Pack" published by Tyne and Wear Museum Service in the 1990's - it has some design motifs and three post cards. Here is the design called variously shell or goose tail. I also found my original handwritten notes taken during a work shop given by Dorothy Osler in the early 90's. I will have to read these more carefully. We marked a cot quilt in the Durham style but I have to confess that I never completed the project. Dorothy gave a talk at an Area Day and gave a workshop the next day -the Area Day was at RAF Bentwaters, a huge American Base which closed very suddenly. 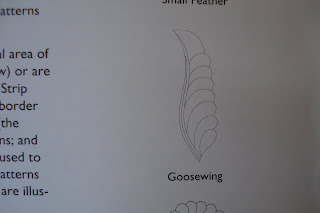 And here is Goosewing, essentially, half a curved feather. This is used as a border element and also as a central motif; its curve makes it very attractive, especially in pairs. 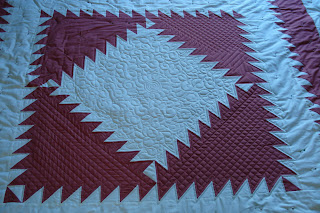 And finally, here is the progress on the sawtooth quilt - I have mostly completed the central area and I am about to start quilting the borders.
Posted by Pippa Moss - Welsh Quilts at 18:13