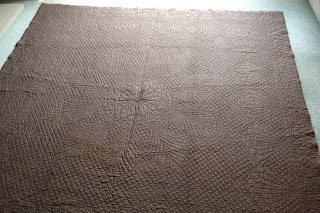 And here is the third quilt of the three that I bought all those years ago in the early 90's. This quilt is probably the most traditional one in terms of design; the quilt is large at 84 x 89 inches. The cloth is a dark brown cotton sateen, rather worn and now very soft, and the filling is cotton. You can see that the centre medallion is a dramatic one with a centre device of a wheel with circles, and large feathers. The border repeats the very centre and the motif is fans with circles. 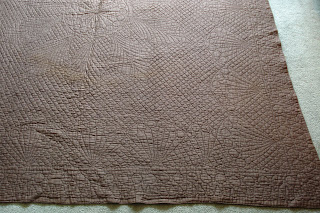 Another look at the borders - lots of circles here. At first I thought they were coins - but the circles are too large. It occurs to me that perhaps the quilter marked around the wooden spool of thread but any household circular object would do. 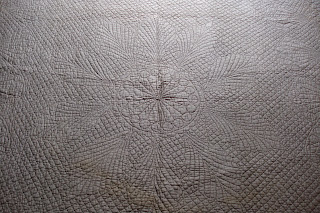 A closer look at the centre of the quilt- there are ten large feathers - eight would have been more usual but here the feathers are too small, so there are five on each side to fill the space effectively. 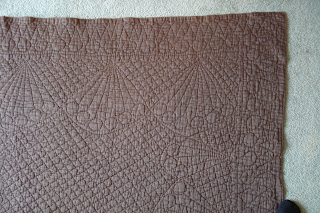 The border of fans - the star quilt in Barbara Chainey project book has a similar circle device so it seems that circles were part of the quilters' repertoire although I would have thought them a bit tedious to quilt! You can see that this quilt is rather worn, especially on the edges. 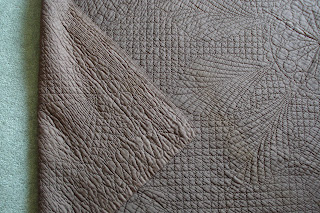 The edges are the usual knife edge and there is one line of machine sewing at the edge. The panels have been sewn together using the sewing machine. A fairly traditional Durham quilt, and typical of many that were found on beds in the early part of the 1900's before store bought blankets took over. 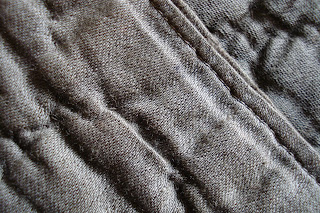 A close look at the edge and the cotton sateen. This cloth does go very soft and velvety as it wears and seems much stronger than modern fabrics. This kind of fabric, cotton sateen, was discontinued in 1936 in the Second World War as it was very labour intensive to make. There was some fabric still out there, unused, but cotton sateen does usually date quilts as being made prior to this date.
Posted by Pippa Moss - Welsh Quilts at 10:00