After the tour of the Woollen Mill, I went across to the mill shop of Melin Teifi, which is a commercial, working mill located in buildings leased from the Wool Museum (which is a part of the Museum of Wales). As it was lunch hour, the looms were now silent. I looked around and bought a few samples of flannel to make a small quilt. 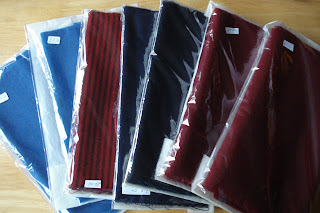 I choose plain colours in navy, blue and dark red plus a stripe. 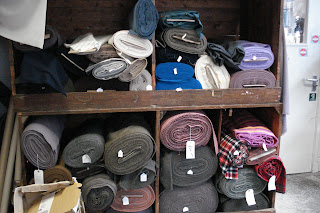 It was interesting to see the bolts of wool that had been woven in the mill. 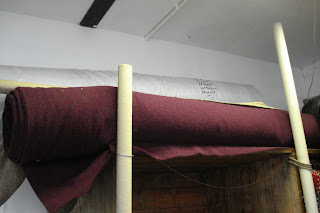 One bolt of fabric caught my eye - I asked what it was called and it is a Welsh "tweed". 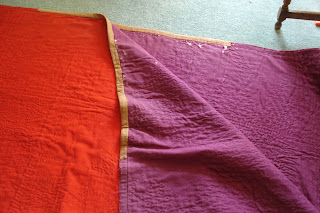 The colour and weight of this cloth reminded me strongly of the plain wool quilt in my collection. 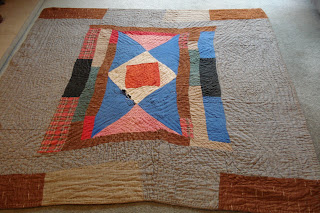 I also thought of this wool quilt, rescued from an attic during a builders' clean in Llandeilo. I saw many more wool flannel quilts the next day, at Jen's Quilt Museum, and began to wonder if this quilt is older that I  had previously thought!! 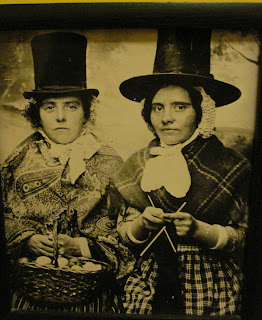 I returned to the Wool Museum and had lunch at the cafe - here is a photo of Welsh women knitting - apparently the Welsh national costume is a bit of a fabrication on the part of Lady Llanover, who wished to revive the wool industry and therefore invented an idealised Welsh costume which included a striped flannel underskirt and a split wool  overskirt or bed gown. An apron, shawl, lace collar and a man's puritan hat completed the ensemble. In fact, country women in Wales wore clothes that were very similar to those worn in other parts of the country. The hat was very outdated even by early 19C standards, and country women would not have worn split skirts to show the petticoat - this was an upper class affectation. More information here: http://www.welsh-costume.co.uk/ 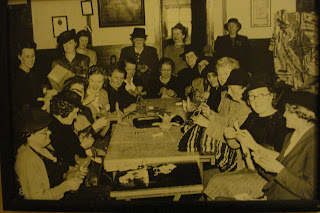 Another photo of Welsh women knitting.

I drove off, getting lost in the process - but I did drive past what I now know to be the Ogof weaving shed. After driving down a very narrow and somewhat flooded country lane, I came to a minor road and then a major road - how I wished that I had taken the sat nav when it was offered! But I arrived back at Llannybydder and found my B & B, Y Garreg Wen, which was very pleasant.

I was also able to visit Jen's Shop and the Quilt Museum, so I have lots of photos to share in future posts.
Posted by Pippa Moss - Welsh Quilts at 12:12