Once the Portcawl ladies had finished their coffee, it was time to take the tour of the Weaving areas. This was the largest of the local mills and dates back to the 1840's. After a fire  it was rebuilt in 1912-1914. Purchased by  the Museum of Wales in 1984, part of the mill is leased and run commercially.

After shearing, the wool is sorted and sometimes scoured. Dyeing takes place. Here are samples of Welsh wool types, but the Cambrian Mills used mainly New Zealand and Australian wools.


The wool was then "willowed" which is the process of untangling and getting rid of any foreign material like twigs and sand. This prepares the wool for carding. The machine was known as a "Devil" as it had a drum with metal spikes. Evidently a very dangerous machine, this example was involved in an accident where a worker lost an arm.

The wool was then carded - the machinery in the Museum is enclosed in cages to protect the public. Carding produced soft wool ready for spinning.

A further machine produced "rovings" which were soft strands of wool.

The rovings were then taken upstairs to the Spinning Mule, where the wool was given its twist and made into strong and pliable threads.

Wool spinning on a spinning wheel had been a domestic activity, so the introduction of the spinning machines deprived thousands of women of their livelihood at a stroke. No wonder there was so much public unrest when the machinery was introduced - the domestic textile industry was decimated.

Finally the woollen warp threads were set up on the loom and weaving could take place - here a blanket is being made.  The fabric could then be fulled (beaten with hammers in water to shrink and thicken the cloth) before being spread to dry on tenterhooks. Light flannels and tweeds did not need to be fulled; they needed only to be washed and scoured.

Some of the fabrics needed special finishing - the nursing shawls were placed in a hot press to impart a smooth, pressed surface. And some wools were combed with teasels to raise the nap and make it fluffy. 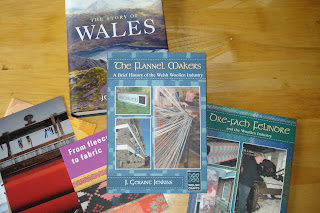 After taking the tour, we were allowed to wander through the museum, which had displays of Welsh woven blankets and other woollen products, as well as further machinery.

In the museumshop, I was able to buy some books about the woollen industry in Wales. I also bought a book on the history of Wales! it may take me some time to plow through this book.....

I then went to the working mill and the mill shop - photos to follow in the next post.
Posted by Pippa Moss - Welsh Quilts at 07:57