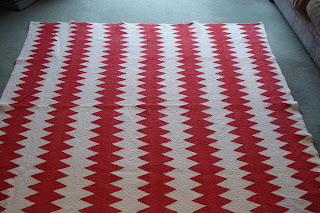 This is a red and white strippy which is enhanced by hand sewn triangles forming a zigzag effect. Very striking on the bed! The date is probably 1880-1900; there is some machine stitching on the edges but the patchwork and the quilting is all done by hand. This quilt is also unusual in that the quilting design is an overall one and does not follow the strips. 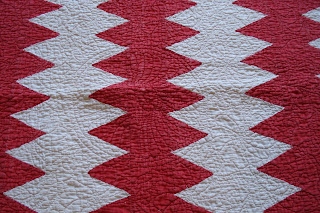 Here you can see the turkey red fabric - red and white strips alternate with pieced triangles - sometimes known as the Tree of Life pattern.

Turkey Red was a process that created a bright red fabric that was very long lasting and didn't fade -hence very sought after and popular. This is a good example of Turkey Red being used in a quilt. 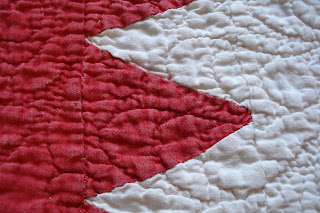 A photo to show the hand piecing and also the very fine quilting. The quilt was bought at an auction in Rothbury, Northumberland, and had come from a large house clearance. It had been in the same house and family since it was made. The area has a strong tradition of quilt stampers (markers) and this looks as if it was marked by an experienced hand. I traced this design onto polythene - the design is not very visible from the front and is more easily seen on the back. Probably marked and quilted from the back or whole cloth side. It is likely that the white side was considered the "good" side, as patchwork was considered the everyday side.
Patterns seen are feathers, ferns, roses and diamond infill. 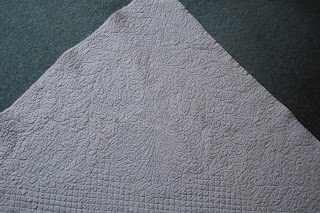 The back of the quilt showing the very fine quilting. 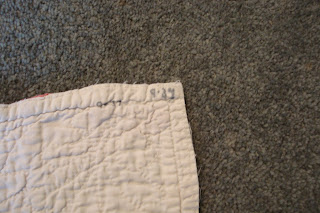 On the corners are laundry marks - these identified the owner of the quilt - most households did not do their own washing but sent it out to a laundry, and many older quilts have laundry marks in India ink. Some have paper slips stapled to the quilt instead.
Although the edges are worn, one can see that one edge is seamed - thus this quilt has "the edge": ie the back and front of the quilt were seamed together at one end before putting into the frame - rediscovered by Pauline Adams. I have discovered this edge technique in several of my quilts, including one from Hawick (Scottish borders) and several Welsh ones, so it was a widespread technique.
Posted by Pippa Moss - Welsh Quilts at 07:17