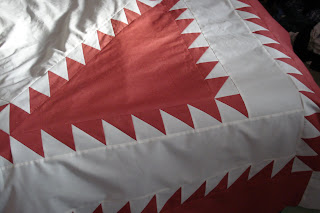 I have been working away at piecing the sawtooth diamond top - it is now complete except for the outermost border - I had just enough of the red fabric, but need to order a bit more yardage of white cloth for the last border. It took more fabric than I thought it would! Here is the top laid out on a double bed. 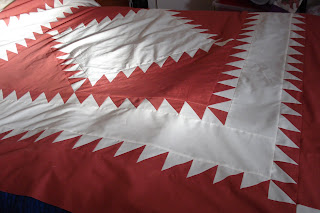 I had a bit of trouble with the triangle units - I had forgotten that they can slant in two directions - and had to follow that antique top very closely. 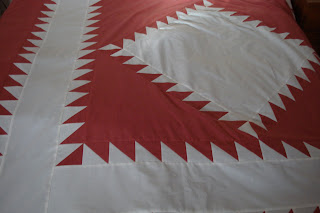 The measurements of the outer borders were difficult - the older top was a bit haphazard. I measured the pink border on the old quilt - all four sides were different measurements and there was over an inch variation, so I just had to go with the new measurements - the new quilt will not be quite as large as the old one. But because I had cut the units so precisely with the bias square ruler, the points came out pretty well. 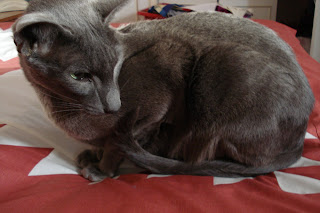 Quality Control soon arrived and gave it the once over - this is Monkey - he is an oriental cat - we did not choose the name , the breeder did - he is Moonsfield WhataMonkey - the vets misunderstood and he is down on their records as WaterMonkey. 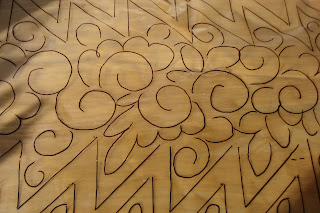 Once the outer border is complete I can start to trace the quilting designs onto the top. I have already traced the designs onto polythene and will use that, face down of course so that the ink of the tracing does not transfer to the back of the cloth. This is the scroll work which is attractive. 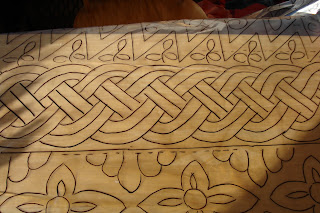 Here is the one of the outer borders, a twist. I may have to redraw this as it is not too neatly done. I tried to see whether I could trace directly off the top, but the markings are too faint. The pink sections were also not visible, although the white ones were just visible. The tracing shows up very well when placed under the new top - so no problem there.
I did a bit of experimentation with a new marker - the Sewline pen - I think my old method, a 2HB mechanical pencil - is better as it goes on easier - of course I will have to be very light handed about it so that the markings are not visible - no blue pencil I'm afraid, which was the old method.
I may have mentioned that I am the new Treasurer of the British Quilt Study Group - a special interest group in the Quilters Guild. There is going to be a Training meeting for all the Regional Treasurers in York in June and I am planning to go. It will be my first chance to see the new Quilt Museum and the exhibits there. Mike and I will probably make a weekend of it - Mike especially wants to ring at York Minster as it has a particularly fine ring of bells (very heavy). I did go there once on a ringing outing in 1977 but I was too scared to ring - I was just a learner then! It has a vast ringing room and of course all the ringers are very good.
My daughter Sophie is still in Australia (at a friend's wedding) and last night I spoke to Tom in London - he is off to visit Lily in Tokyo on Saturday for a fortnight. Lily has gotten a new visa for two years which is good news. Tom has bought me an external hard drive and will teach me how to use the graphics package when he gets back - I have already printed off the users manual. That will be a real learning curve.
Posted by Pippa Moss - Welsh Quilts at 09:36