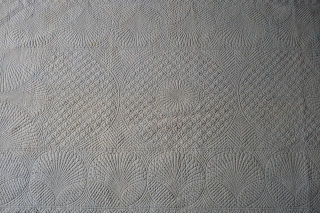 Here is a quilt that I bought (very inexpensively) about a year ago. The quilt was sold as a "Blue Durham" in the Art Deco style. It is a small single size, about 45 x 85 inches. It is worn, and has been mended, but I bought it because it appeared to have unusual quilting patterns, which I find very interesting. I'm afraid that the quilt does not photograph very well, however perhaps you can see that it does follow the frame pattern, and the quilting is fine with very intricate designs. 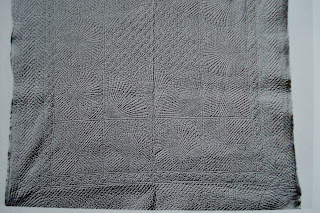 This is one end of the quilt - you can see that it has round "palm" designs plus chevron designs, plus filler wine glass patterns. 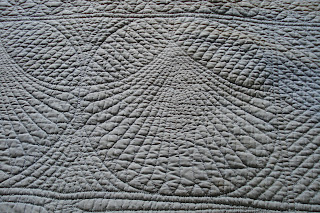 Here is the circular pattern, that are like palm leaves and do look a bit Art Deco-like. Very elegant. 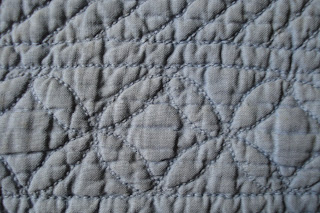 The quilting is very fine and small - but it is all backstitching!!! 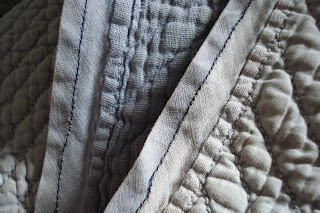 The edge has come undone - not sure if there was some sort of frill or fringe, or if it has merely come unsewn. 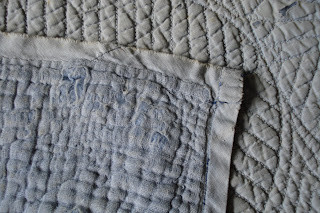 You can see from this that it is very worn, both on the top and also on the reverse - especially at the edges and corners.
I took this quilt to the Rochford study day - comments were:
Its not in the British quilting tradition
Continental?
Arts and Crafts movement??
Made by nuns??
Definitely dyed - the wadding is blue, too.
When Clare suggested that the pink sample was by the Porth quilters, I went to look at the figure in Elizabeth Hake (1937) - English Quilting - Old and New. As I was looking at the other plates, I came across this figure - number 47: 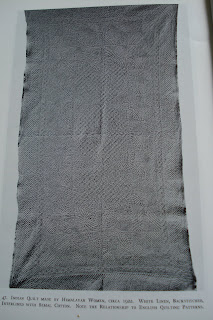 (Sorry that the photo has not come out very well - go off to your copy and have a look - the old plates are quite gray but are detailed if you look closely). The caption reads: "Indian quilt made by Himalayan women circa 1922. White linen, Backstitched, interlined with semal cotton. Note the relationship to English quilting patterns".
It struck me that this quilt was very similar to the quilt I owned - and the more I looked, the more convinced I became that this was the SAME quilt!!
I made a rough sketch of the quilt and compared the quilt with the plate - the half motifs are in the correct place - the designs are the same. I counted the "points" on each fan/palm leaf - the number varied from 19 to 25, 22 being the most common - in each case the number agreed perfectly. I did not include the corner fans, as these aren't very clear in the plate. I noticed whilst doing this, that there is a seam - this is identical in position in both - this really confirmed things for me. It does prove that the cloth is pieced and not a single piece of fabric, as the seam runs across the border but the centre fabric is entire.
It is hard to see the binding in the plate so this is still a bit of a mystery but it looks like a double binding which has become worn or undone...
So, it appears that this is the same quilt, however in the intervening years from 1937 it has been used intensively and become worn; it has been darned. Also, when the white quilt became yellowed and stained, it was dyed blue to hide these somewhat (you can still see the yellowing at the ends). How did the quilt get from Hake's book to Ebay? We can't tell as there is no other information about the quilt in the plate, we don't know who owned it or from where it came...there are no sources or attributions...at the time I bought the quilt I did email the seller - she replied "I'm afraid I don't know anything about the quilt, it came in a lot of other quite good textiles. I think it might have been made for a child's bed as its quite small. The stitching is lovely, very small but its not in very good condition, Kind Regards, Lois W."
How exciting...and also puzzling - why exactly, was this included in a book about English quilting?? other than to show that the frame format was not uniquely British--was there some English link with the Indian/Himalayan women quilters of 1922? Were quilts an indigenous craft in that area or was the sewing introduced by outsiders, as in Hawaii? Many unanswered questions - I have only two books which cover Indian quilts - one about Ralli quilts, the other, Quilted Planet by Celia Eddy. Neither has any wholecloth quilts from India, they are all patchwork or applique.
Question, questions - but I am glad to have found out more about the quilt - and very happy to have firm link with Elizabeth Hake's book.
Posted by Pippa Moss - Welsh Quilts at 16:53