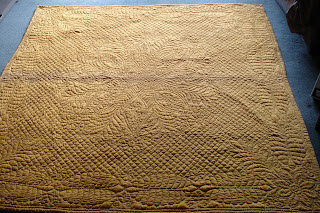 Here is a stamped "Durham" quilt that I believe to have been finished in Wales - there are a number of clues....the pattern is a handsome but simplified north country design. The size is 83 by 82 inches and the date is 1920 or 30's. 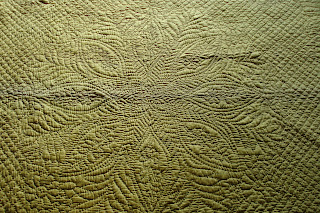 The centre of the quilt has flatirons, ferns and roses with diamond infill. 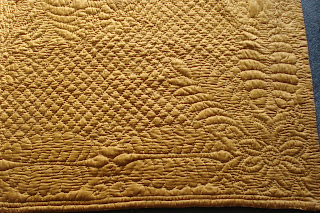 The corner treatment is a flower plus simple feather motifs.Elegant but all fairly large scale. 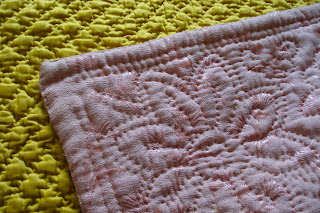 Here is a photo of the reverse - this old gold and pink was a popular combination (the so-called custard and rhubarb!) The reverse is a brocade type cloth and you can see that the stitches are rather coarse. 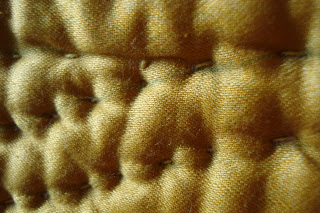 You can still see the blue pencil markings - the quilt has been used and washed but the markings must have been robust as there are still many traces of these markings. 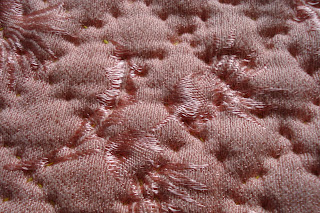 This is a close up of the reverse, you can see that the design created by the threads carried over the surface is a thistle in this case - a handsome fabric.

The clues that this quilt was made in Wales from a north country top:
1) The quilt came from a seller in Llanelli - it belonged to the seller's aunt (Lillian) who lived there - the seller assumed that it was Welsh: it was probably bought very inexpensively at an auction or house clearance, which she liked to attend. The seller did not think Lillian had any connections with Durham or the north country area.
2) the wadding is a very thick blanket which is very likely a Welsh wool blanket - this accounts for the coarse stitching: the wadding is too thick to achieve finer stitches.
3) The edge treatment is typically Welsh and is neatly hand sewn.

Mavis Fitzrandolph in Traditional Quilting,states on page 43 of quilt stamper Mrs Peart of Allendale ...."in 1952 she was charging five shillings for marking a quilt top....and she had orders from many parts of England and even from parts of Wales... "
Although there is no direct proof of this, I believe that this is one of the later North country tops that was sent to Wales and was completed by a Welsh quilter, using techniques that were familiar to her, and which were different to those techniques that would have been used by quilters in other parts of the UK.
Posted by Pippa Moss - Welsh Quilts at 18:00