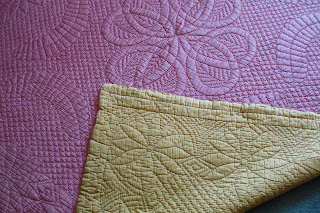 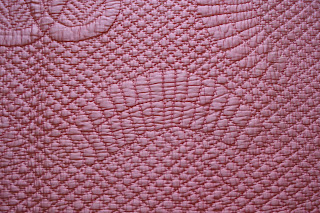 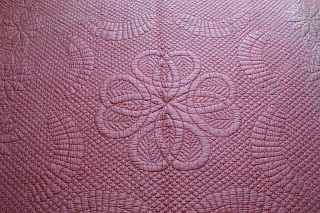 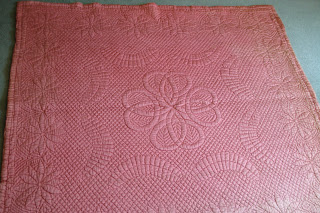 This quilt was the seller's mum's wedding quilt. Mother was called Jennie Bertram, and she married Harold Wilson (no, not the). She lived at South Crofton Street, South Sheilds, and married in the early 1940's. Jennie worked as a wages clerk for the bus company. The whole family were staunch Methodists and regular chapel goers, so her mother commissioned the ladies of the Harton Road Chapel quilting group to make this quilt. Rationing was in force - she wasn't sure what effect this had on the quilt - but did know that gran asked for it to be "double quilted" - made of double thickness wadding - to make it extra warm.

Cotton sateen was last made in 1936 - it was very labour intensive to make - so this fabric must have been pre-war stock. Cotton sateen really is sturdy, and it becomes very soft after reapeated washing.

This quilt was used constantly - it went with the family to Hucknell in the Midlands, to Ashington and finally Newbiggin in Northumberland. The seller, Jen Preston, remembers it from when she was little - stroking it and tracing the patterns with her finger. Her Mum used it until the 1990's, until Geoffrey died, when it was given to Jen.

The quilt is very heavy and thick. It measures 72 x 72 inches and is dusty pink on one side and old gold on the other. No blue pencil markings survive due to washing and use. Stitches are large due to the heavy wadding, about 6 - 8 stitches per inch. The quilting thread is gold, to match the front of the quilt.

Quilting patterns seen are large pointed flowers, curved feathers and a true lovers knot plus diamond infill. The diamonds are very variable, and the feathers are very curious - very crudely drawn. There is no curving to the individual feathers and the total effect is that of a large worm or grub. There is a single line of stitching next to a very wide margin.

This quilt did have some limitations - it had to be made during rationing when fabric persumably was difficult to get - it had double wadding - yet it shows how the designs had become much simpler and altho pleasant in total effect lack the skill seen in other quilts.
Posted by Pippa Moss - Welsh Quilts at 09:54