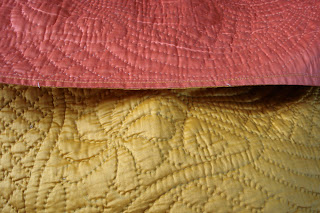 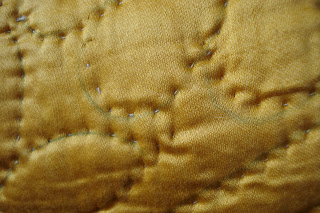 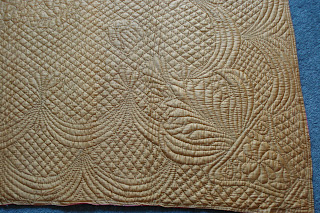 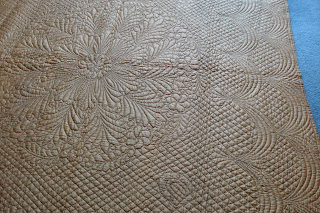 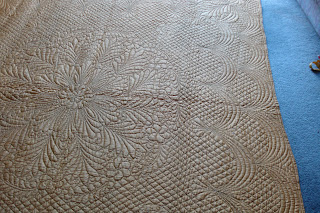 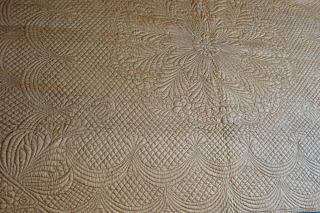 I am interested in this period as it contrasts well with the inter war era, but is not too far distant, memories are good of this era. Quilting was in decline after the war - little fabric had been available during the war years and people were too busy doing other things - but there were a few quilters still around. My feeling is that quilts for everyday use had been replaced by storebought goods, and quilts now became a "special occasion" gift - often a wedding gift. I am going to present some quilts from this era - three wedding quilts and one made by the WI. It is supposed that quilting, especially quilt marking skills, declined and although the designs are pleasing, you will see that the motifs are enlarged, simplified and the arrangements lack the earlier grace and expertise of design.

Here is a wedding quilt. It was given to the seller's parents, Doris and Geoffrey Wilkinson when they married in June 1946. They lived on a farm called Shittlehopeside Farm in Weardale. The quilt was a wedding gift given by Geoffrey's mother,Isabella Craig, who lived at the adjoining farm, Jollybody Farm near Stanhope, in Weardale. She had lived all her life in the dale, and was a quilter. However, this quilt was made by her friend Mrs. Ninnums who later lived near Leadgate, Consett, where her husband was a policeman. Because Isabella did not go out of the Dale except to go shopping at Barnard Castle, it is supposed that Mrs. Ninnums had lived near Stanhope in earlier years.


This quilt has never been used, it was always kept wrapped in a white sheet which was changed regularly. It has never been washed and the gold side still has the quilters blue pencil markings. The quilt measures 92 x 97 inches and is a salmon colour on one side and gold on the other.

In this quilt, there is a large central medallion with straight and curved feathers.The motifs are striking but large and cover the cloth well.Two lines of swags are found around the edges, with diamond infill. Baskets filled with leaves or feathers are seen in the quilt corners. And notice the horseshoe near the corner motif - a good luck symbol. White thread is used, with quilting about 8 - 10 stitches per inch. The edges are bound with a single line of machine stitching. The wadding is of cotton.

Mrs Ninnums was obviously an experienced quilter. She produced a striking quilt with some effective use of templates. The designs cover the surface well and are large and bold but with little subtlety of the older quilts.
Posted by Pippa Moss - Welsh Quilts at 08:00