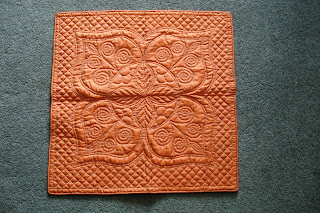 I recently bought a sample of quilting. The seller was a woman from Bideford, Devon, who was selling off bits and pieces of her late mother’s estate. Her mother had been interested in sewing, and had been given some samples of quilting by a neighbour. I bid on the one that looked welsh - it was orange with beech leaves, and a neatly piped edge. There were no other bids so I got it at a very reasonable price. The other samples were quilted with more conventional north country motifs 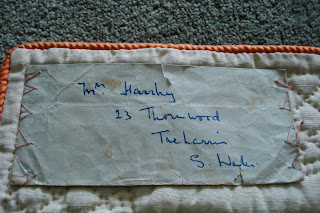 When the sample arrived in the post, it had a name and address attached to the reverse - a Mrs Harrhy of 23 Thornwood, Treharris, South Wales. The seller surmised that all the samples had been made by the same quilter -this may or may not be the case- anyhow I was kicking myself for not taking more notice of the other samples. 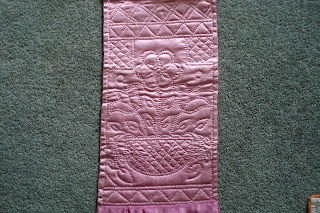 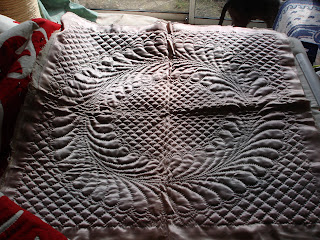 In the Autumn 2009 issue of Culcita, Clare Claridge describes a quilt at St Fagans, where nine quilting samples were joined together to make a quilt - quilt-as-you-go of the 1950’s? She surmised that the samples might have been apprentice samples or RIB samples. One of the motifs was recognised as being designed by Jessie Edwards - and the samples had been set together by Phylis Margaret Jeffries of Merthyr Tydful, one of Jessie’s students. A full copy of this article can be found on the BQSG website, under “articles“.

This posed the question, whether these samples found in Devon could be similar Rural Industries Bureau or quilting class samples? The connection is tenuous and there is no explanation as to how the samples from Wales (and elsewhere?) ended up in Devon. The only possible link was a local Chapel. Suffice it to say, Mrs Harrhy for some reason felt that it was important that her work be identified as hers, so it must have been either a contest or a working sample, or something that was to be returned to her. The postal address with street number is clearly a way to contact the quilter.

It would be interesting to know more about this quilter. I do not know much about genealogical research but at some point will be doing further research to see if anything can be found. Clare is doing research on other quilters of South Wales and I look forward to her findings.
Posted by Pippa Moss - Welsh Quilts at 11:43