As you may have noticed, I recently became very interested in Shawls.....There are not very many books on the subject, although I have tried to glean as much as possible from the few that I have been able to find.

Here is a lovely shawl with an interesting provenance. This is an earlier, printed example from the 1830s. As artificial colours had not been discovered, the dyes are all of vegetable origin.
The size is large at 80 x 100 cm. 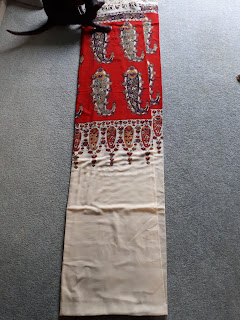 There is some fading, but no repairs. There is a white fringe on all four sides. 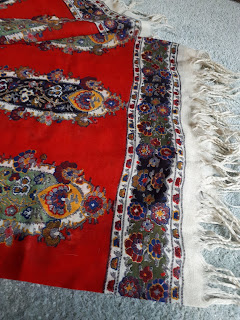 This shawl was packed away for decades... 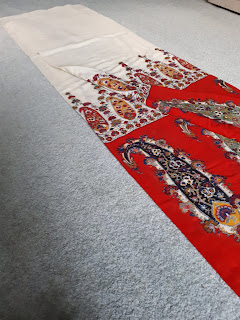 The seller was dispersing her mother's collection of textiles - her mother was a well known interior designer of the 1980s and 90s. This piece was bought at an auction at Sotheby's in October 2003. 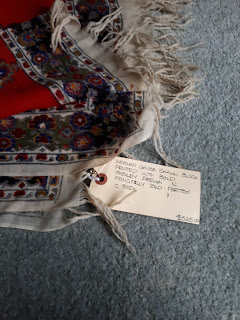 The item has a small tag attached... 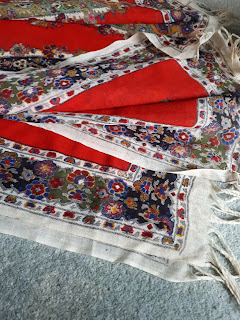 The interesting part is that the Sotheby's sale was selling off the Castle Howard costume collection.
Castle Howard is well known as the location where "Brideshead Revisited" was filmed. 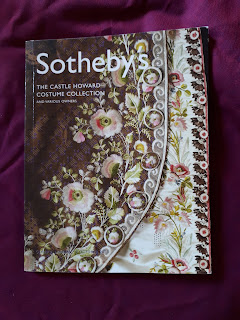 I was able to go online and find a copy of the sales catalogue - I was surprised when it arrived, as it had come from a large warehouse in India! 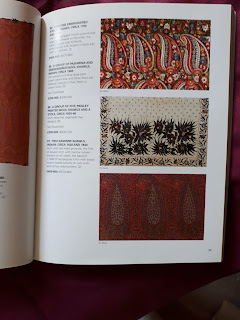 The catalogue gives information on the collection and the reason for its dispersal. The collection was started by George Howard, Lord Howard of Henderskelfe. Instead of in cases, as was usual for the time, the costumes were displayed on mannequins and in room settings. The collection grew through donations, loans, purchases and the family clothes. In 1973 a halt was made to further additions. The collection ultimately had about 25,000 items. By the 1980's the building in which the costume gallery was displayed, the stables, had started to deteriorate, and the cost of upkeep was great. There were worries about maintaining the condition of the displays. The only route to secure the items for the future was to close the gallery and to put the items into storage. Unfortunately, other institutions were not interested in the collection and no suitable  alternative venue could be found. The costume gallery was finally closed in 1993. Meanwhile, the main house needed reroofing. There was also major restoration needed to the garden and its follies.  The interior furnishings of the house also needed constant attention and restoration, hence the decision to sell off the costume collection and raise much needed funds.

It is interesting to look through the varied items in the catalogue. I am glad to have a small item form this sale!
Posted by Pippa Moss - Welsh Quilts at 08:20