On Friday the 20th September, a band of  ringers (local to the Brandeston/Pettistree/Ipswich areas) rang 1260 Grandsire Doubles at St Mary, Clopton. This was the first quarter since the rehanging of the bells. A service of rededication was held on Sunday 8th September, which Mike and I attended and rang the bells for. Subsequently, Chris McArthur, who had helped the bellhangers from Nicholson's, was invited to ring a quarter peal. 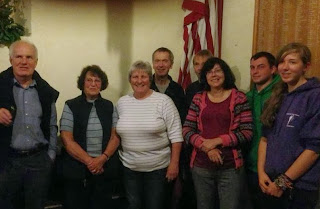 The ringers: Chris McArthur, Diana  Pipe, Hilary Stern, Mike Whitby, Pippa Moss and Timothy Stanford. The other two people were two locals who had elected to stay in the belfry and videotape the bells as they were being rung!...luckily they had ear defenders as the bells are still loud.....

The bells go easily now that they have been rehung in a new bellframe. They are no longer anti-clockwise, having been rehung in the usual clockwise manner. Three of the bells were found to be cracked upon their removal from the tower, and were welded by Soundweld. The other bells were tuned by Whitechapel Bellfoundry. 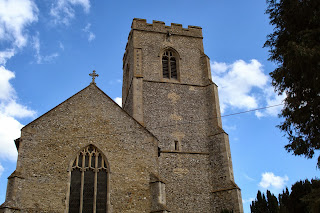 Clopton Church sits on a small hill, not far from Burgh Church. It has American connections, as Debach Airbase was built nearby, one of many airfields built in East Anglia during World War II.

We call from tower and steeple,
Upon the day of days,
All faithful Christian people,
To worship, prayer and praise.
We ring with joyous gladness
When man and wife are blessed;
We peal in muffled sadness
For loved ones laid to rest.

Our lives, like bells, while changing,
An ordered course pursue;
Through joys and sorrows ranging,
May all those lives ring true.
May we, through Christ forgiven
Our faults and failures past,
Attain our place in heaven,
Called home to rest at last.