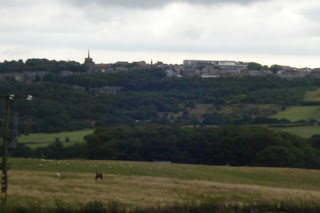 I drove up to Beamish Museum to measure the Sanderson Star quilts in their collection. I drove up on Thursday - a long drive at six hours - and stayed at a place that I have stayed before, Bushblades Farm. Here is a view from the farm across to Stanley, a former mining town. On my last vist, the farmer's wife was ill in bed with flu and the farmer and his son had to look after me. I didn't remind them that the heating had also broken down that time!! Unfortunately, the farmer and his wife are selling up to move down South to be nearer their three children, so this could be my last stay there. The farmer's grandmother was a quilter although there aren't any quilts remaining in the family now. 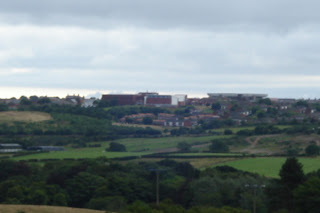 Another view across the hills....you can see that it is partially country and partly built up former mining towns. Of course when the mines were operating, the scene would not have been as green....the large building is a centre for bowls which is very popular in this area... 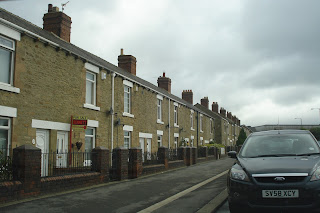 I pulled off the main road to take this photo, showing the typical mining cottages found all over the North of England. 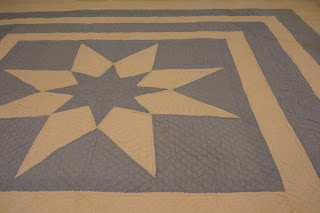 When I arrived at BEamish the next norning, the quilts were all rolled up, and waiting in the study room. This is the first quilt that I looked at, it is circa 1890 and is probably marked by Elizabeth Sanderson. Donated by Mrs. Allinson. The fabrics are a white cotton twill and a blue cotton chambray (where the threads are two different colours, blue and white).The quilt is 90" square and has the typical quilting pattens - Weardale Chain, twist and Gardiner running feather.

Traces of blue pencil remain. This quilt had just come out of the freezer - it has previously been on display in the houses, but is now kept in store. This quilt is going to the Tate Modern next year. The freezing process is part of a program to treat all quilts for environmental pests, not only moths but all insects, fungi, mildew and mould, etc. The entire Beamish collection is now designated, but the banners and the quilt collection were the first items to be designated. The Beamish quilts have all been donated; generally, Beamish does not buy quilts.

I did not take a photo of the second quilt!But there is a photo of this quilt in Quilts and Coverlets on page 54. It was the mauve and white star quilt made by Mary Fairless in 1929 when she was 21 and an apprentice to Mrs. Peart. The material was a chambray called Zephyr, bought at the local Co-Op. Some blue pencil markings arebstill showing. It is rectangular at 90 x 92 inches. 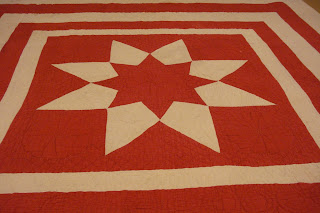 The third quilt was a red and white quilt made by Margaret Earsdon for her wedding (1915-1920) in Shankhouse, Northumberland. It is made of white cotton and turkey red cloth. Like the quilt at the Quilt Museum, this quilt has a square at the corner, so the star pattern is "modified". The centre star is s bit bigger than in the original pattern (not as deeply divided due to angles being blunter at top of rays).This quilt is very worn and has a different array of quilting patterns. The outer border has a very bold flower or tulip pattern.

At the Festival of Quilts, Pauline Adams was telling me of a theory, now not able to be either proved or disproved, that to save time and to be economical of cloth, that two contrasting yard pieces of fabric could be laid out and all pieces for the centre block cut out at once. Afterwards, the pieces could be swapped - two star blocks would be made, one light on dark and the other dark on light. Certainly, one does see quilts where the colours are reversed, as here. An interesting idea... 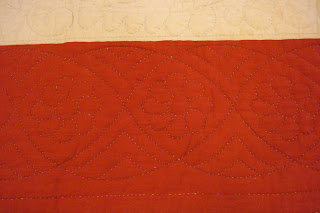 The next quilt is the one that is almost certainly marked by Elizabeth Sanderson herself. It has a lovely Weardale chain in the outer border. 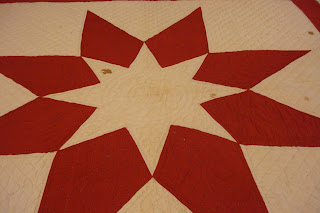 Blue pencil is still visible on this quilt, which is dated 1890 and is from Allenheads. the quilting pattens will be used as a baseline for my study into the star quilts and especially into the quilting patterns used.
This quilt measures 89 x 91 inches. The border strips are very variable - on the outer border, the finished strips measure 7", 7 1/2 (2) and 7 1/4. Again, Pauline suggested that the strips were not precisely measured and cut as today, but just torn, this might account for the variation seen.

I had requested two other star quilts, but these proved to be a wholecloth with a "star" centre, and a very worn basket quilt with appliqued stars. A further Sanderson Star quilt was still in the freezer. 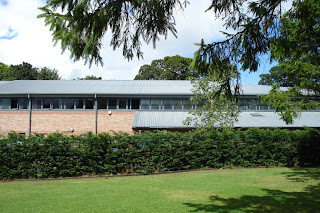 A view of the resource centre at Beamish. 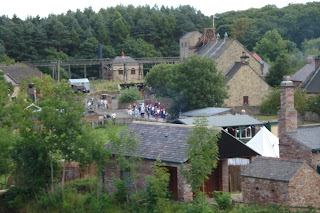 General view of Beamish and the mining village area..... 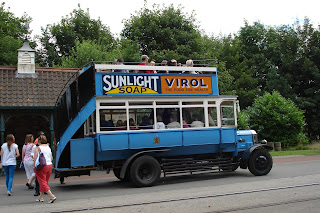 The weather was good and the museum was busy, with many queuing for the bus services and also the circular tram.

I was interested to hear that Beamish is in the process of applying for a large Lottery Fund grant - if successful, two new themed areas will be built - one 1950's and one 1980's....the 1950's area to be built first. So two eras that I remember well are now ancient history for today's youngsters....time marches on.....time to start collecting those 50's, 60's, 70's and 80's quilts now, perhaps...

Finishing early, I set off southwards for my hotel in Birmingham for the Festival of Quilts - a longer drive than I had expected at four hours....thank goodness for the sat nav, as it really is "spaghetti junction" around Birmingham.