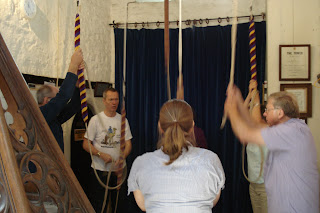 The music of changeringing - a quote from an article and talk by John Harrison:

An instrument whose moving parts weigh a ton or so.
An instrument with a delay of over a second between your action and a sound.
Playing an ensemble of such instruments to a precision of a few hundreths of a second.
A form of music constrained to play every note before repeating any of them.
Composing a piece to last several hours in which no bar must be the same as any other.
Performing such a piece without any music.

The full article can be found at www.jaharrison.me.uk/Ringing/Music