While I was at the QuiltFest 2012 in Jacksonville, I was lucky enough to catch a lecture by Teddy Pruett, a quilt historian and appraiser from Lake City, Florida.  I was very interested to hear her talk about her research into the characteristics of quilts made in the Deep South of America. This was followed by a show of quilts.

I have agreed to contribute to the  BQSG blog - hopefully, about once a week - so for a more complete  report on this topic, click here to go to the BQSG blog:

Prior to the Civil War, esquisite quilts had been made by wealthy Southern women or their slaves. However, the South was ravaged by the Civil War and became desperately poor until WWII. Although the South was a quarter of the US land area, incomes were the lowest in the United States. This means that  quilts made in the South are utility quilts, made from recycled materials with a poor standard of workmanship. Filling was a thick layer of locally picked cotton, and the backing was usually bleached and dyed feed sacks. Quilting was very roughly done, due to the thickness of the cotton wadding. No bindings are seen, just the backing brought forward to the front.

You may be wondering why quilts were needed in the South, which has the reputation of being so very warm. The truth is that the winters could be very cold - in addition, the houses or shacks were very poorly built, had no insulation and were built up on bricks. Warm winter bedding was vital under such conditions. 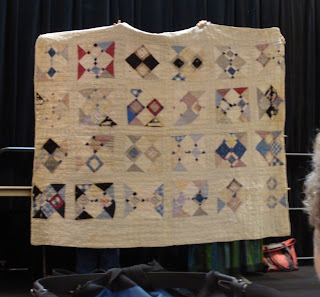 Southern quilts are not made from new fabric or new dressmaking offcuts, They are made from the less worn portions of discarded clothing. Southern quilts also have very odd placements of fabric colours. In this quilt, the blocks are the same but look very different due to the variable placement of colours. 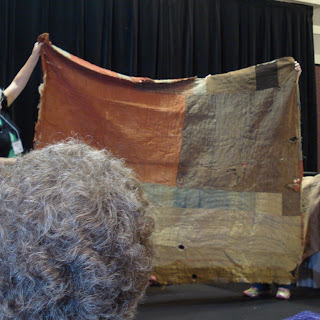 This quilt is Teddy's oldest, and is an unlovely quilt - made of bleached and dyed feed sacks. Tobacco sacks, measuring 3 x 7 inches, are also used in the patchwork.
After the Civil War, fabric was not available, so homespun fabrics and rewoven fabrics were seen. 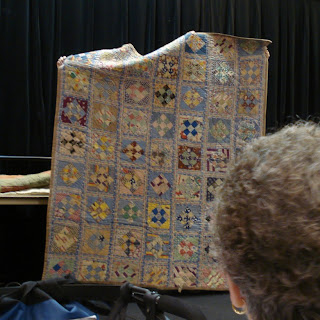 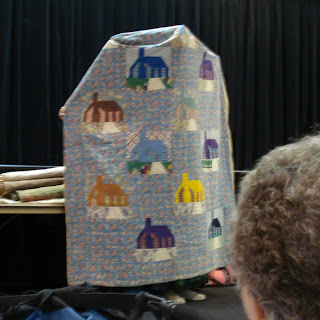 This pattern is known as Honeymoon Cottage - and was a nationally published pattern. But here the quilter has made the pattern very poorly, as this is what the standard of quilt making was like in the South - a culture of poverty and a scarcity of time and materials. Scottish Irish people settled this area and gave the area its culture and manner of speaking, quite different from the more Germanic settlers of the North. 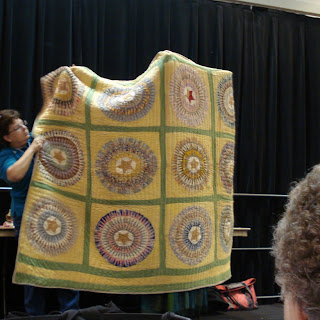 Patterns with circles and points are common - but rather carelessly made in Southern quilts, as seen here. 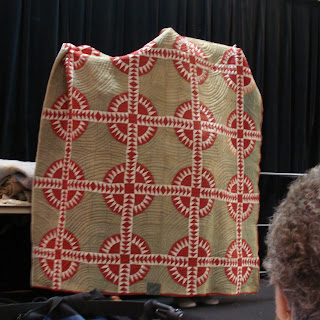 Home dying of cottons was normal, as fabric was recycled and not bought new for quilts. Backings were usually home dyed feed sacks and are usually a brown colour. Here, the red has stood up well (unlike some reds that are fugative and turn tan) but the green dyed fabric has faded badly. The small square is one piece that is from a different source and has not faded. 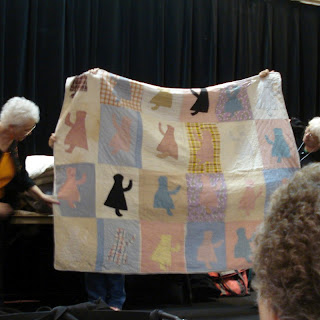 Sun Bonnet Sue was known as Dutch Doll in the South. This quilt is a very odd looking Dutch Doll - and may be an Afro American quilt although this is only speculation. Southern applique quilts were simplified patterns with huge pieces.

Other characteristics of Southern quilts - many have a triple sashing, which is not used as an outer border. Fan quilting is very common as it was easy to do and also easy to resolve in the middle of the quilt. As the quilts were made of recycled fabrics and were used constantly, they wore badly. Recovered quilts are therefore comon.

Also seen are quilts made from tobacco sacks - these pieces are 3 x 7 inches and were commonly  made into patterns such as rail fence and streak of lightning.

I found this a very interesting talk; it reminded me of the Welsh quilters who used what they had in a manner that was known to them, in an environment of poverty. It reminds us that quilts are a reflection of the prevailing culture of the time in which they were made.
Posted by Pippa Moss - Welsh Quilts at 17:43