I am back from the Festival of  Quilts - and just about recovered. This year was just as busy as previous years, although it remains to be seen if attendance was as good and if people spent as much money! This show has been sold to another company, so we may see some changes over the coming years. 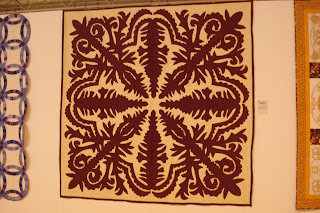 My entry this year was my Hawaiian quilt Piillani, a Poakalani pattern from the thirties. Piillani was one of the greatest Hawaiian kings, and the ancestor of many kings including King Kamehameha the Great.

This show is so large, the standard so high and the awards so few, that I never expect to win anything. But I do find the judges comments very interesting (these are pinned to the back of the quilt on its return). This year one of the two judges marked everything as Excellent except the quilting and edge treatment which were only good. "Striking with its stark contrast and impeccable technique". The other judge marked everything good except for quilting and edge treatment which were excellent. "A stiking choice of design, really well made and finished. Perhaps the brown area is just a little "heavy" could be finer?" This puzzled me as the quilt is purple and cream but I guess she is refering to the cream background quilting? Anyhow, judging is a delicate and personal matter. I am just happy to participate. 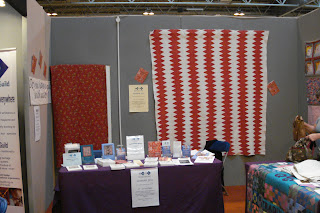 I spent most of my time at the British Quilt Study Group table. My two Turkey red quilts are hanging up, they were returned from Scotland in time to take along. As the York Quilt Museum in the stand next door was having a display of turkey red quilts, this worked well. Also, our group had made a real effort to publish a small booklet on turkey red - this was priced at only £1.50. 150 copies were printed and I think we were left with only 5 copies, so that was a success! The group is thinking about another booklet next year to accompany the museum's display. 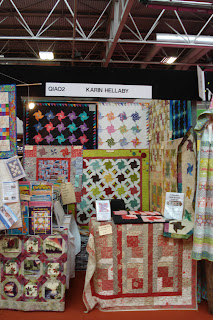 The Quilters Haven/Karin Hellaby stand - in a new location this year, with much more room surounding it. I was able to share a room again with Teresa at a hotel in Solihull which was pleasant and affordable.

This year I also went bellringing - I went to a Thursday night practice at Shirley - then I went to Sunday morning ringing at Solihull. I got a warm welcome at both. 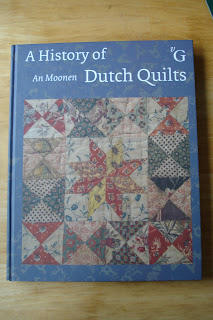 I didn't buy any fabric this year - but I did splurge out on books. I had been wanting to get An's book on Dutch quilts... 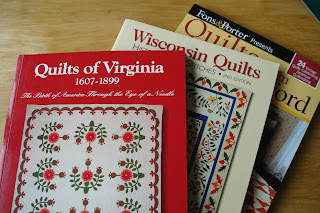 ...and I also bought these American books on heritage projects in Virginia and Wisconsin, together with one on the Henry Ford Museum collection. 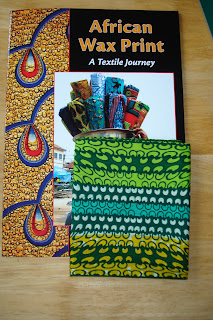 I also bought this book on African wax fabrics. One brand of these fabrics were formerly manufactured in the UK, but are now designed in Manchester and made in Ghana. However, they are being overtaken by the cheaper plain printed fabrics from China.

I also went to four lectures this year which I very much enjoyed - Dorothy Osler, Jonathan from the International Quilt Study Center in Nebraska, Jane Sassaman and Bettina Havig.

More photos of quilts to folllow.
Posted by Pippa Moss - Welsh Quilts at 17:04