Here is a quilt that I bought recently (an early Xmas present). It has a label which states that it was made by Annie Penrith of Chester-le-Street for Mrs Whaley of Lanchester in 1939, and that the quilt cost £10.

The size of the quilt is 78 x 92 inches. The right side is of sage green taffeta and the reverse is a lime green cotton sateen. Taffeta is a smooth, crisp plain woven fabric that is made from silk or synthetic fibres. It has a nice shine which is why it was used for quilting.The design is neatly drawn and the quilting is good. 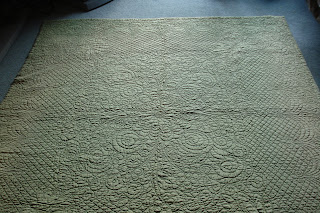 The front of the quilt in the sage green taffeta. This is a stamped quilt although there are no markings to be seen. There is a large central rose, surrounded by large scrolls and leaves. Crosshatching separates the border of hammocks. 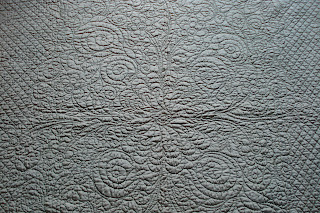 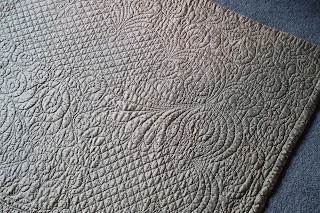 There is a corner area of scrolls and leaves that is nicely arranged. The edge is neatly handsewn. 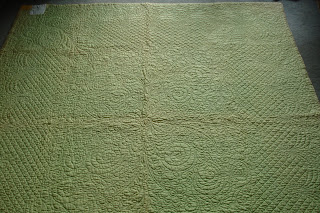 The lime green cotton sateen reverse. You can see that this side has some sun fading along the folds but the quilt appears unused. 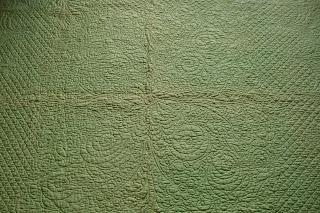 Central area of the reverse. 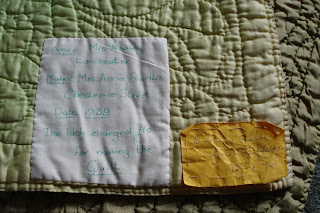 Here are the labels - a paper one which states the size and "Green Taffeta" and a hand written one (in Pigma pen, so recent?) with the quilter's and owner's names.

Lilian Hedley wrote - I haven't heard of her, £10 was a lot for a quilt at that time and I do query that amount. A number of years ago I discovered that a lady who had given a quilt to Beamish was still alive ( see page 101 of Quits and Coverlets) .....she told me both herself and her sister were engaged to be married but the war broke out and the men were called up, they decided to bring the weddings forward and asked Mary Potts if she would make a quilt for each of them. They cost 3 guineas (£3.3s) and she paid a shilling a week until paid for. She went to the Co-op to pick the fabric, but I have no idea if it was "all in" or the fabric separate, it didn't occur to me to ask. Even if the fabric was separate, it wouldn't come to £10, that was a fortune then."

And later Lilian also wrote - "By the way, I have an old newspaper piece about Florence Fletcher around 1960 who quoted quilts as being made for about £20, the wages in 1960 were vastly different from 1939, I still cannot get my head around that £10 quilt."
Posted by Pippa Moss - Welsh Quilts at 08:10