Here is another early purchase. It is a red and green strippy quilt. Strippies were the utility quilts of the North, and with a few exceptions, they were well used and therefore are generally fairly tatty. This one is no exception, but does serve as a good example of your average quilt. Strippy quilts were popular. They looked cheerful and were easy to put together with purpose bought fabric. Once in the frame, they were easy to mark as the strips could be marked with border patterns along the strips whilst in the frame. 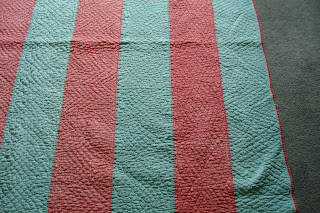 A general photo. The stripes are meant to run up and down the bed, not across. Utility patterns here are cross hatching. waves and a braid.

Of course, we would not use green and red in a quilt as the colours are now strongly associated with Christmas! However, the holiday was not commericalised then as it is now and the colours did not have the same connotation then. 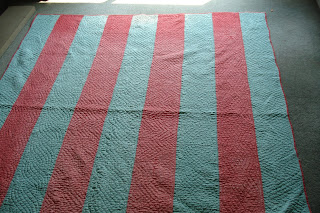 You can see that there are usually an uneven number of strips. The quilt is backed with a plain white fabric. The strips in this North Country strippy are narrower than those seen in Welsh strippies.

The fabric used here is cotton poplin. It is a densely woven cotton that is hard wearing and was liked by quilters. 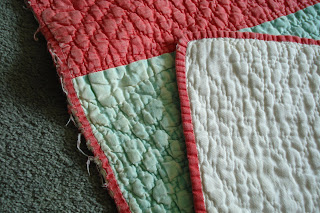 This one is fairly well worn along the edges - and it has been bound at some point. British quilts usually did not have bindings, except, as here, as a repair.

No provenance with this quilt, although it came from the Drighlington area of West Yorkshire, near Bradford. It was an early purchase and did not cost much - but it did teach me to look at the photos carefully - the description said it was in great condition - and its not! Its rather worn. But that is to be expected with this type of quilt - a warm bedcover that was part of growing up in many households in the north country.
Posted by Pippa Moss - Welsh Quilts at 10:12