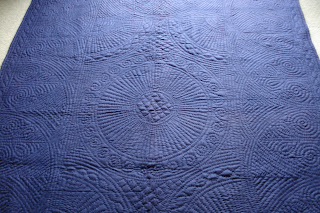 Today, I thought that I would post some more photos of the red and blue flannel quilt - to show the quilting designs and detail more clearly. This is a wonderful quilt, and clearly has never been used. You can see that the quilting is simple but effective - a central sunburst is surrounded by a spiral scroll and corner fans. Then there are borders of church windows infilled with chevrons and spirals. At the outer edge is a simple twist. 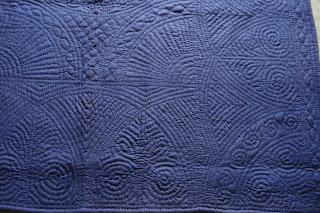 Another look at the church windows and the corner fan. 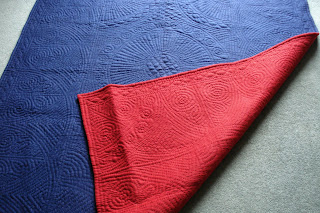 The colours are a bright red (which doesn't photograph as well) and a royal blue. The quilting thread is blue - so the blue must have been the right side - but was it quilted from this side (hard on the eyes!) ? Just went to have a look - its hard to tell, but it looks as if the quilting was done with navy thread from the red side.
This is a heavy quilt - I would guess that there is no filling? The two woollen fabrics would be quite heavy in their own right. 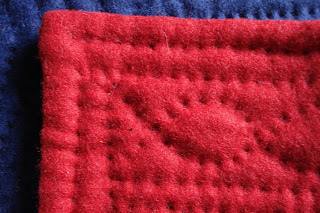 A detail of one corner, and the simple twist used there. 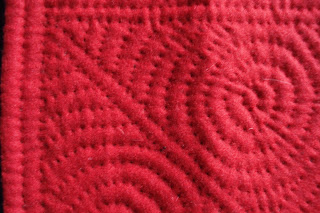 Another detail of the spiral infill . 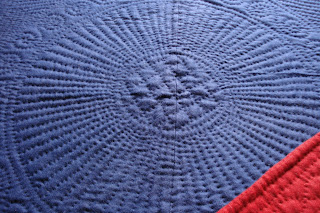 Deatil of the central "coin". 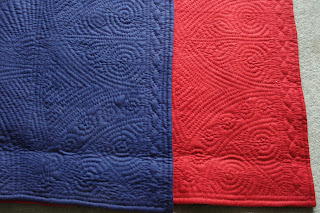 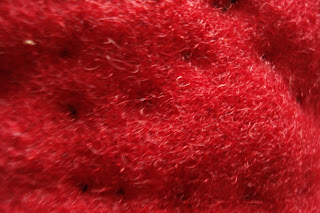 A close up of the flannel fabric - it is woven , but has a teased, brushed surface - it is not a felted fabric.
Posted by Pippa Moss - Welsh Quilts at 14:30