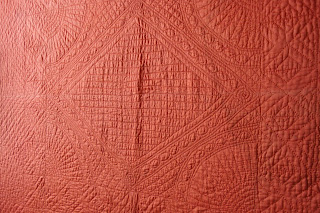 Here is a quilt which looks much better now than when I bought it!

It had been bought at an auction and was very grubby - as if it had been left in a shed or loft. Not only was it dirty but it had water stains too - there was a large "tide mark" at one end of the quilt. There were also fades where the quilt had been folded and left in the sunlight. It also looked as if it had been dragged along the floor as there was a lot of grime. But, it was nicely stitched and a good example of a better "country" quilt.

This quilt was bought at an auction in LLanwardra village hall; the sale was from three separate house clearances and was run by an estate agent. The dealer (Jane) had wanted a particular pink tapestry blanket but in order to get that blanket, had to buy the whole box of quilts and blankets, of which this was one. 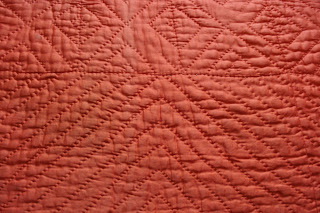 A close up of the neat stitching, in effective chevrons which are often seen on Welsh quilts. A simple fan is seen in the corners...the centre medallion is a rectangle with diamond infill, surrounded by a twist. 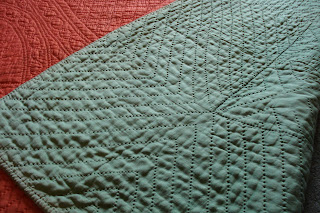 The size is 82 x 70 inches and this is what most people would have had on their beds.... 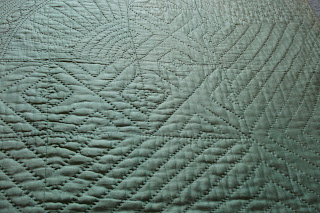 The stitching is very nice considering that there is a blanket inside as wadding.... 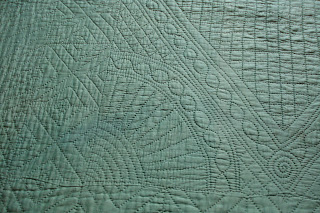 As the quilt had not cost me very much, I decided to have a go at cleaning it. Water does not suit many quilts, but I reckoned that this one was sturdy enough to subject it to washing - and, the dirt would have harmed the quilt over time if left alone.
First I tested it for colour fastness, then washed it in cool water in the bathtub. The first two tub fulls (where I used a bit of mild detergent, Synthrapol) came up very dark brown - I also used some home-made mild soap in some areas - then rinsed three times. I was getting tired of washing the quilt at this point - so although the water wasn't perfectly clear I took it down to the washing machine in a basket and spun it dry, first at low speed and then at higher speed. It was then put over a padded clothes horse in the spare room (oh, sorry, quilt storage area). It looked a lot cleaner and the worst of the tide mark had gone. A small area had opened up on one side - you could see that there was a woollen blanket inside.
The quilt now looks 100% better than when it arrived - I like the individuality of these quilts and only wish I knew more about it.
Posted by Pippa Moss - Welsh Quilts at 09:00