Pilani, a village in Kaui, Hawaii (I think - will ask Cissy)

I have started a new Hawaiian quilt - Pilani from Poakalani. You may remember that I already had one that I was working on - Pua Pake, or Chysanthemum. But that applique was not nice to work on - the yellow fabric was not good quality,thus harder to work with, and there was not enough contrast between mid yellow applique and light background - I really need a darker fabric in gold or apricot I think. So I may start again later with a different coloured Kona cotton. 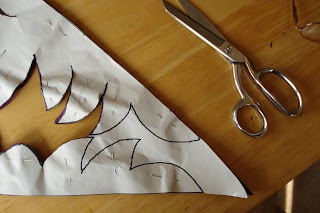 In the meantime, I bought some cream Kona cotton as a background, and used some extra wide purple Kona cotton that I had brought back from Florida. As the Poakalani patterns are traced onto rather flimsy newsprint, I usually iron the newsprint onto freezer paper to stiffen it up a bit before cutting the pattern out. In this case, you can see that there is a "negative" centre - ie, a hole. I knew that this would cause problems in placing the cut out pattern onto the background fabric - so I have left the centre uncut and intact for now. I will make some freezer paper templates and complete the centre applique with the "freezer paper on top" method when all the rest is finished. 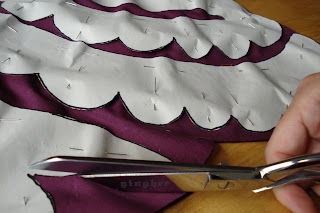 Cutting out the pattern through eight layers of folded fabric is a lengthy process - thank goodness I have my Gingher scissors (still very sharp as they were carefully hidden away when the children were small).

I was also horrified to see that there was a faded patch in one area of the applique fabric when I came to use it - it looked as if the bolt corner had faded in the shop. Luckily, it was on one side of the cloth only and the right side was unaffected. And, in fact, much was cut away when I cut the pilani pattern out.

Placing and pinning the cut fabric onto the backround (using the placement creases) was more difficult this time and took quite a while. My two "helpers" thought that it was great fun. Monkey helpfully brought a large pheasant's feather to join in the fun, which had to be confiscated...finally it was finished.

What a difference using good fabric makes - the applique is much easier as the fabric "behaves" itself and turns under nicely. The whole effect is crisper and much nicer with smoother edges. I'll enjoy this more - later, I'll make a decision as to whether I continue with the yellow applique, or cut my losses and unpick and recover the nice background fabric, and use a darker and better fabric for the applique. I still have the Pua Pake pattern folded away...

I also bought some silk thread at FOQ - it is nice to use, but I think it is the thinness which is good - the thinner good quality cotton seems just as good to use - so not convinced about the extra expense of silk thread. Instinct tells me that cotton might be sturdier in the long term.
Posted by Pippa Moss - Welsh Quilts at 13:20