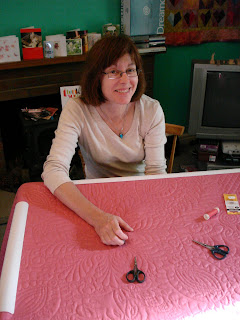 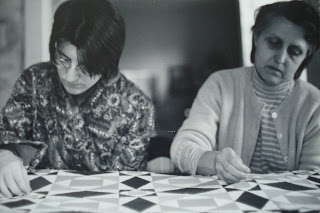 And I thought that this blog was going to be about Welsh Quilts!
I started to make quilts as a teenager in the 70's, using Ickis's The Standard Book of Quilt Making - where everything was hand pieced and handsewn.Here is a photo of Mother and Carol quilting the first Storm at Sea quilt - they both have one hand below the quilt top but whether doing the rocking stitch I cannot tell....the date must be about 1972, or when I was in High School. I did not do any more quilting until I went back to the US to visit in 1989 - Trudy Hughes' book Template Free Quilting had come out and what a revolution it was - rotary cutters and machine piecing. I bought a cheap sewing machine (agony and pleasure in equal measures) and brought home some fabric from Joann's in pink and blue. And tried to come to terms with the 1/4" seam...when it came to quilting, I couldn't remember how we had done the quilting in the big frame on Carol's quilt - so I did stick stab - it was very tiring and not very even although the stitches were small. I didn't like that uneven effect.
So I decided to teach myself to quilt properly - not easy as there were few books about - Michael James Handbook of Quiltmaking had the best description - I bought some preprinted panels and made a quilt - by the time I had finished the quilt I was doing the "rocking stitch". I have asked a lot of well known quilters how they quilt - Lilian H withdraws the needle - Jacqui H. does it flat on a table - me, I've been doing the same way for 25 years now and don't think that I will change! I use one thimble on top, a naked finger below...and I quilt using a Q-snap floor frame. I have used up one frame - it got old and the plastic started to perish - but not very expensive to buy another on Ebay (someone else's purchase that was unused). This suits me as it is easy to put up/take down and is not very big - once a quilt is basted it can live in the frame in the corner of the lounge. It can be covered with a sheet if necessary. I know one or two people say that it is not tensioned well in the corners but I've never found this to be the case. The quilting area is tensioned well and the caps swivel to adjust the tension - the entire quilt frame can be rotated to bring a new area to hand - and the quilt can be easily repositioned when a new section is needed. I find these days that I mostly quilt away from myself - the rhythm is better this way and I don't have to use the under finger as much. In earlier days I quilted wit 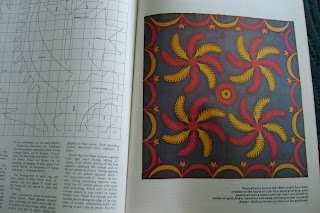 h a large hoop and this was OK - but I do need a frame of some sort to quilt. It is very important to thoroughly baste the quilt, either with safety pins or with thread basting.
The princess feather quilt pattern is one that is taken from an antique quilt shown in McCall's Book of Quilts - one of the best books I've come across. At the time that I made this quilt (1993) I was not into old quilts so modified the border to something a bit newer looking. Applique quilts do need a strong border to contain all that energy...and a hefty binding as well. The quilt was an experiment in applique methods - I made up a cardboard feather template from the pattern given in the book - the first block was marked around this using a Pigma pen in brown and then needleturned - the markings occasionally did show. The second block was made using the freezer paper on top method - using a concertina of freezer paper I cut out eight paper feathers and ironed these on top of the applique fabric. This method worked well and I could reuse the paper templates so I did the other two blocks t 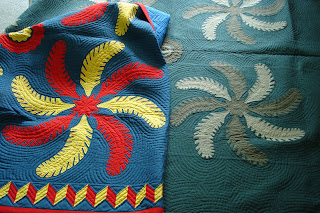 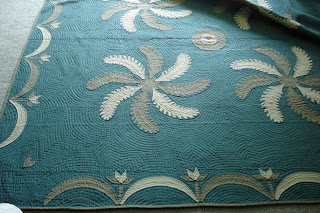 The interesting thing was, I bought a similar Princess Feather quilt on eBay that was sold as a Durham quilt - no provenance and no date - but I realised that the pattern was exactly the same as in the book except that two corner swags were omitted - it also has a binding which is not traditional for British quilts. On closer inspection, one can note that the feathers are not made as large as the original quilt - the templates have been enlarged but not to the full extent called for in the pattern. More curious is the fact that the quilt is not made to the block system. One can clearly see in the original quilt that there are four blocks plus a strip with the border. In the "Durham" quilt, there are simply two lengths of fabric seamed together - so more in the northern wholecloth tradition. The colour scheme is also not very American! The background cloth is a teal colour, with the applique in light and dark olive greys.The pattern has been followed very closely, however the two corner swags have been omitted. The two small diamonds have been included however. The applique stitching is adequate, however as the darker olive fabric is coarse the sewer struggled a bit in places. White sewing thread has been used in the applique with a whip stitch used.
I think this quilt was clearly made following the pattern in the McCall's book - that means that this quilt dates from 1964 at the earliest as that was when the book was first published . What a pity we do not know who made it and why - it is nicely done although the fabrics are not the liveliest - using up what was to hand?? The backing is very obviously pieced together using large scraps.
Posted by Pippa Moss - Welsh Quilts at 12:40