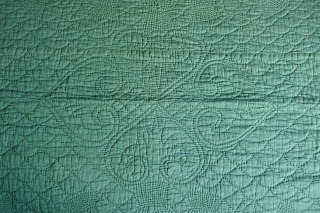 Here is a Hawick quilt that was bought in Cumbria, p 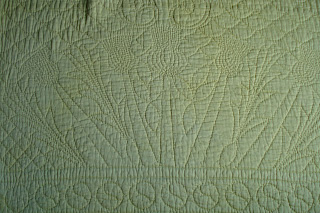 ossibly from Carlisle. I bought it via Jen Jones.
It is made in green and yellow sateen and is 78 x 68” in size. Hawick quilts were made in the 1920s and 30s and had a distinctive repertoire of quilting patterns. You can see in the photos the large daisy (known as gowan in Scotland), the heart with a spiky leaf or thistle motif, the large and rather crudely drawn thistles, clamshell (known as Scales) infill and a “yin yan” circular motif. This quilt is very similar to a number of other Hawick quilts; you may have seen Bridget Long’s black and pink Hawick quilt which was on show at the Festival of Quilts along with other examples. 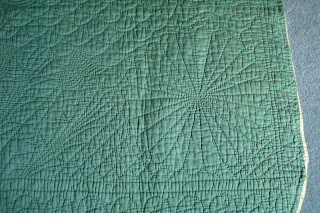 Hawick (pronounced Hoick) is the largest town in the Scottish Borders. It has long been a centre for knitting, spinning and textile production due to its proximity to two rivers, the Teviot and the Slitrig.

These quilts are made in the northern whole cloth tradition and are often found in two contrasting colours (bicolour). There was an interesting article by Linda Lane Thornton in Volume 9 of Quilt Studies - “The Hawick Quilts” pages 110-129.

These quilts are very distinctive and were apparently made in some numbers. The quilts were made by several local church groups as fund raisers, and sold in yearly sales (evidently it took some time to make sufficient goods for sale). Some of the quilts have fine stitching but many, like this one, have stitching that is coarse and uneven, further evidence that the quilts were made by groups of ladies that were perhaps not expert quilters. The article gives historical details and investigat 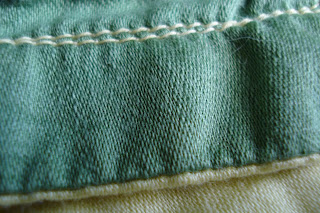 es the name attached to the quilts, Mrs. Janet Pow, a local quilter and organiser.

This particular quilt is of interest for another reason, as it has an interesting edge treatment along one side. Most British quilts did not have a binding. The quilts were made in frames, with the leading edge basted on to webbing; later the four edges were finished with a butt or knife edge where the edges were turned in and either stitched by hand or by machine. Machine stitching was frowned upon by purists but was favoured by north country quilters as it gave a durable, firm finish to the edge. Welsh quilts were usually finished by hand.

Pauline Adams wrote an article “Evidence for an Unrecorded Way of Setting Up a Quilt in the Frame” in Volume 3 (2001) of Quilt Studies. There is an update in a recent Culcita issue. This technique is not found in any of the quilting books, and had not been recorded previously - but is not too uncommon once you start to look closely at the quilts. In this method, the front and back fabric panels were seamed together by machine, right sides together. turned out and then this seamed edge basted into the frame webbing. You can detect this method by looking for machine seaming at the edge of one side (the other three are as normal) and also by the fact that the wadding doesn’t reach the edge of the quilt as it does on the other sides= as the quilt had been basted onto the webbing, the wadding couldn‘t be pushed Into place here. On this particular quilt the treatment of the edge is visually very different on the “edge” side (see photo). Examples of “the edge” have been found in Durham, Welsh and now Hawick quilts, so was either a known method of putting a quilt into a frame, or, perhaps, independently arrived at. Why was this method used? It ensured that the top and bottom panels were straight in the frame, it saved cloth )you could sew right up to the selvedge), most importantly it saved time - you didn‘t have to finish one side, and it provided good anchorage to attach the leading edge to the frame.

For some reason, this quilt has also had two corners rounded off at some later date. So, as we know which edge went into the frame, and quilters worked in one direction, we now know the direction of working - from one side of the quilt to the other - and we also know how the quilt was intended to lie on the bed, as the two rounded corners would have been at the bottom of the bed.
Posted by Pippa Moss - Welsh Quilts at 11:31